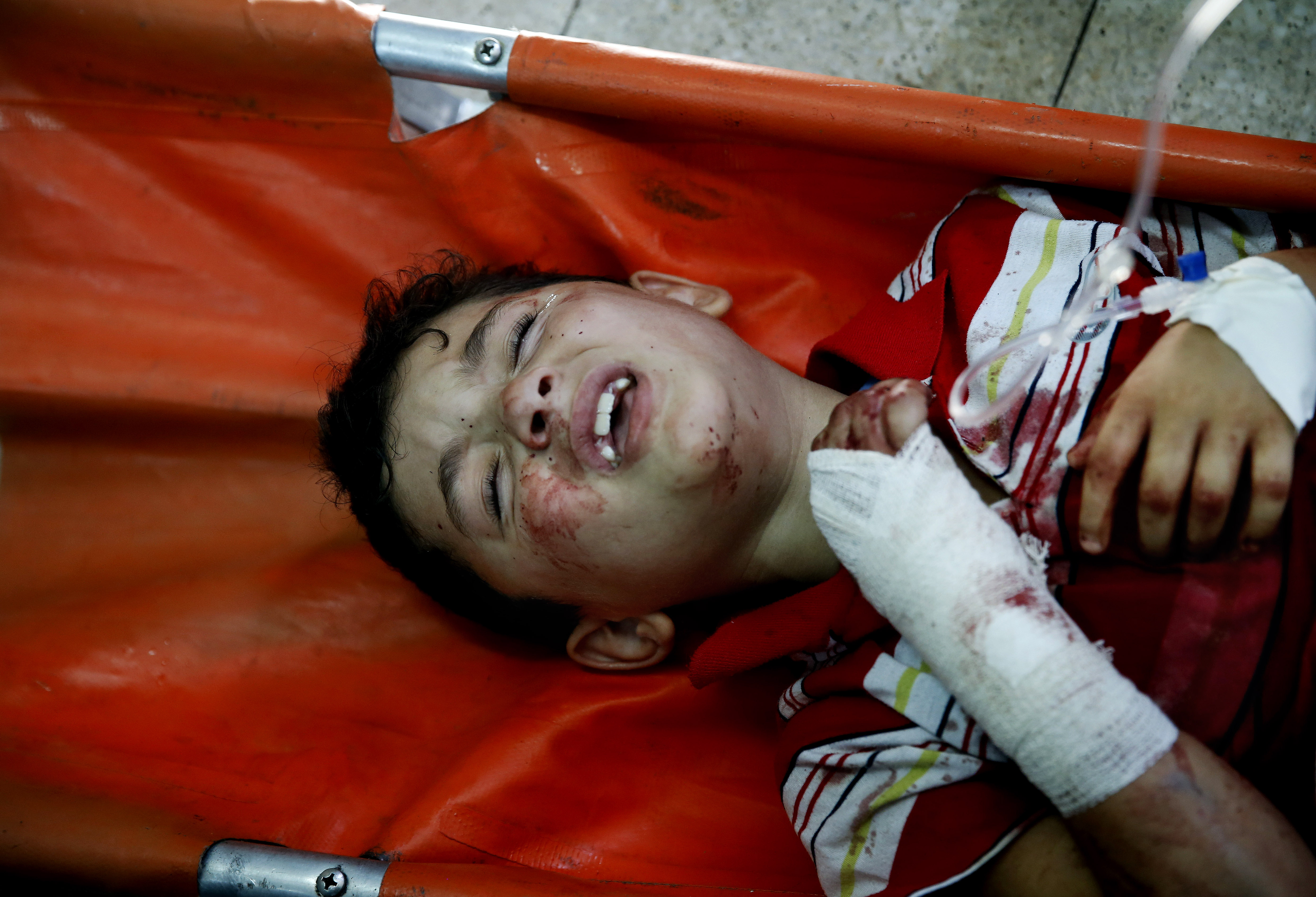 GAZA CITY, Gaza Strip -- Israeli tank shells hit a compound housing a U.N. school in the Gaza Strip on Thursday, killing at least 15 people and wounding dozens who were seeking shelter from fierce clashes on the streets outside, Palestinian officials said, as Israel pressed forward with its 17-day war against the territory's Hamas rulers.

Pools of blood stained the school courtyard in the northern town of Beit Hanoun, amid scattered books and belongings. There was a large scorch mark in the courtyard marking the place where one of the tank shells hit. Dozens of people, including children were wheeled into a nearby hospital as sirens wailed.

Survivors told CBS News correspondent Barry Petersen that they were warned that the school was targeted and they were preparing to leave when they say Israeli forces opened fire.

Kamel al-Kafarne, who was in the school, said that the U.N. was putting people on buses when three tank shells hit. "We were about to get out of the school, then they hit the school. They kept on shelling it," he said.

The Israeli military said it was reviewing the incident, saying that rockets launched by Hamas had landed in the Beit Hanoun area during fighting with its forces, and that those rockets may be responsible for the deaths.

U.N. Secretary-General Ban Ki-moon said he was "appalled" by the attack.

The strike occurred during a day of heavy fighting throughout the coastal territory. Israel says the war is meant to halt rocket fire from Palestinian militants in Gaza and destroy a sophisticated network of cross-border tunnels. International efforts to bring about a truce appeared elusive, with the violence continuing and Hamas reiterating its demand for a cease-fire that a crippling Egyptian and Israeli blockade on Gaza be lifted.

Gaza health official Ashraf al-Kidra said the dead and injured in the school compound were among hundreds of people seeking shelter from heavy fighting in the area.

It was the fourth time a U.N. facility has been hit in fighting between Israel and Palestinian militants in Gaza, since the Israeli operation began July 8. UNRWA, the Palestinian refugee agency, has said it has found militant rockets inside two vacant schools but the target of Thursday's strike was not immediately clear.

State Department spokesperson Jen Psaki said the U.S. was "deeply saddened" by the incident and urged "all parties to redouble their efforts to protect civilians."

"U.N. facilities in Gaza are sheltering more than 140,000 Palestinians, including many innocent children, and must remain safe, neutral sanctuaries for fleeing civilians," Psaki said.

UNRWA spokesman Chris Gunness called on all sides "to respect the sanctity of civilian life, but also the inviolability of U.N. property."

Gunness tweeted that the refugee agency tried to coordinate with the Israeli Army for civilians to leave but the request was never granted.

The deaths raised the overall Palestinian death toll in the conflict that began on July 8 to at least 751, al-Kidra said. Israel has lost 32 soldiers, all since July 17, when it widened its air campaign into a full-scale ground operation. Two Israeli civilians and a Thai worker in Israel have also been killed by rocket or mortar fire.

With the number of casualties growing on both sides, the international community has stepped up diplomatic efforts to broker a cease-fire. But Hamas is insisting on the lifting of the 7-year-old blockade, which was imposed when the Islamic militant group seized control of Gaza from the Western-backed government of Palestinian President Mahmoud Abbas.

Israel imposed the blockade in 2006 after Hamas and other militants abducted an Israeli soldier in a deadly cross-border raid. It tightened the siege in 2007 after Hamas seized power from forces loyal to Western-backed Palestinian President Mahmoud Abbas, but had eased some of the restrictions in recent years.

Egypt tightened its own restrictions last year after the overthrow of a Hamas-friendly government in Cairo and has destroyed many of the cross-border smuggling tunnels that sustained Gaza's economy, and which were also used by Hamas to bring in arms

British Foreign Minister Philip Hammond on Thursday urged Hamas to agree on an immediate humanitarian cease-fire and said Israel and Palestinian Authority could then come together to hold talks.

"Hamas must agree to a humanitarian cease-fire without preconditions for the sake of the people in Gaza," he said during a news conference after meetings with Egyptian officials in Cairo. "We are greatly concerned by ongoing heavy humanitarian crisis and the loss of lives."

Israeli Prime Minister Benjamin Netanyahu, however, made no reference to the cease-fire efforts in underscoring his determination to neutralize the rocket and tunnel threats.

More than 2,000 rockets have been fired at Israel from Gaza since July 8, and the Israeli military says it has uncovered more than 30 tunnels leading from Gaza to Israel, some of which have been used by Hamas to carry out attacks.

"We started this operation to return peace and quiet to Israel... And we shall return it," Netanyahu said after meeting with Hammond earlier Thursday in Israel.

In other violence, six members of the same family and an 18-month-old infant boy were killed when an Israeli airstrike hit the Jebaliya refugee camp early Thursday, according to Gaza police and health officials. Twenty others were injured in the strike, they said, and rescuers were digging through the rubble of flattened homes, looking for survivors.

An airstrike on a home in the southern Gaza town of Abassan killed five members of another family, al-Kidra. Abassan said.

Heavy fighting was reported along the border of central Gaza, according to Gaza police spokesman Ayman Batniji. Israeli troops fired tank shells that reached parts of the Bureij and Maghazi refugee camps, although no injuries were immediately reported.

Clashes also erupted between Palestinian fighters and Israeli troops in the northern town of Beit Lahiya, and the sound of explosions was audible across the town, Batniji said.

Israeli naval vessels meanwhile fired more than 100 shells along the coast of Gaza City and northern Gaza, the spokesman said, adding that rescue teams were unable to operate in the area because of the heavy fire.