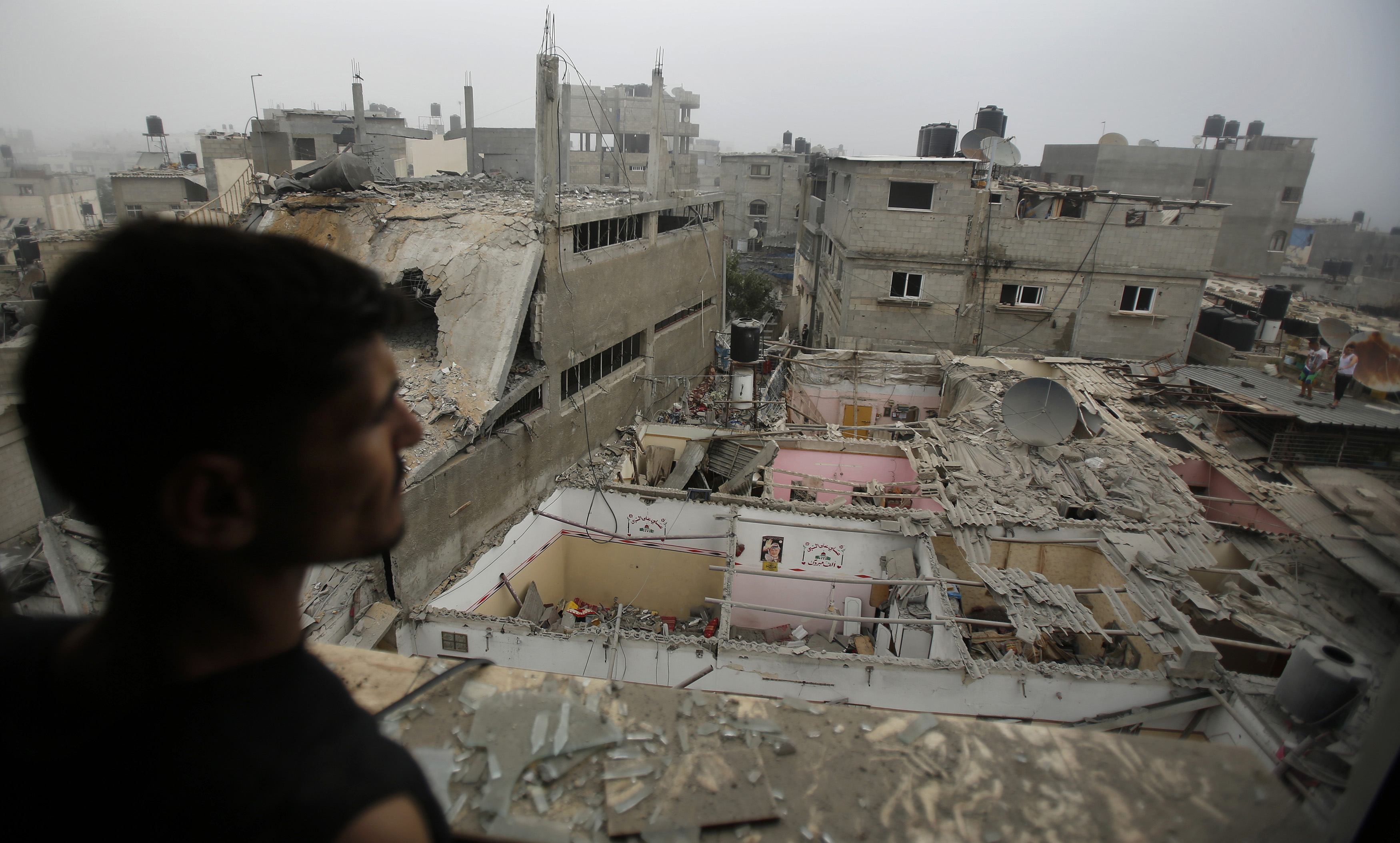 GAZA CITY, Gaza Strip -- Israeli tanks and warplanes were pummeling the Gaza Strip Thursday as U.S. and other diplomats pushed for a cease-fire with Hamas militants.

Gaza police say an infant boy was among those killed when Israeli fighter jets struck the Jabaliya refugee camp.

Palestinian health officials say 718 Palestinians, mainly civilians, have been killed since the conflict began on July 8. More than 400 Palestinians have lost their lives since the start of the Israeli operation's ground phase on July 17, according to the Israeli newspaper Haaretz.

Israel's military says it has lost 32 soldiers in the attempt to halt rocket fire from Gaza and destroy cross-border tunnels, including three troops killed Wednesday. Two Israeli civilians and a Thai worker in Israel have also been killed.

U.S. Secretary of State John Kerry, in the region to pursue truce efforts, says some modest progress has been made. He returned to Cairo late Wednesday after talks with Israeli and Palestinian officials.

But prospects for a quick end to the fighting were dim.

An Israel cabinet minister was quoted as saying Thursday that a truce was unlikely before next week. The Reuters news agency reports Science Minister Yaakov Peri, a former security chief, told the Walla news site, "I do not see a ceasefire in the coming days where the IDF (Israel Defense Forces) leave" because Israeli troops need more time to destroy the tunnels.

Underscoring the challenges facing international negotiators shuttling around the Middle East in a high-profile bid to end the bloodshed, the leader of Hamas insisted the Islamic militants would not relent until their main demand of the lifting an Egyptian-Israeli blockade of the Gaza Strip is met.

On the ground, meanwhile, Israeli troops backed by tanks and aerial drones clashed with Hamas fighters armed with rocket-propelled grenades and assault rifles on the outskirts of the southern Gaza Strip town of Khan Younis, killing at least eight militants, according to a Palestinian health official. Hundreds of people fled their homes as the battle unfolded, flooding into the streets with what few belongings they could carry, many with children in tow. They said they were seeking shelter in nearby U.N. schools.

"The airplanes and airstrikes are all around us," said Aziza Msabah, a resident of the city in the southern Gaza Strip. "They are hitting the houses, which are collapsing upon us."

One family fled with what they could carry, including the family fan. And they brought their bitterness with them, reports CBS News correspondent Barry Petersen.

"Everything is demolished back there," one man said. "Trees, houses."

"Nobody cares," a woman said, "about the people who die here."

Kerry, who met for the second time this week Wednesday with United Nations Secretary-General Ban Ki-moon, flew to Israel on an Air Force jet, despite a ban imposed a day earlier by the U.S. Federal Aviation Administration on commercial flights into Ben-Gurion Airport because of Hamas rocket fire nearby. The FAA extended the ban and many major European carriers also canceled more flights due to security concerns. The FAA dropped the ban just before midnight Wednesday.

"We certainly have made steps forward," Kerry said in Jerusalem, without elaborating. "There's still work to be done."

Israel has insisted it must substantially curb the military capabilities of the Islamic militant group that controls Gaza - a position that appears to have gained support within the U.S. administration - while Hamas has demanded the lifting of the crippling Israeli and Egyptian blockade on the impoverished coastal territory it has ruled since 2007.

Hamas leader Khaled Mashaal said in a televised speech that the opening of the border crossings was a red line.

"When it comes to the balance of power in this crisis between us and Israel, they are the executioners, the aggressors, the occupiers, the settlers, and we are the true owners of the land," he said from his home-in-exile in Doha, Qatar. "We will not accept anything but the end of the siege."

The U.S., Israel and the European Union all consider Hamas a terrorist organization, though the U.N. does not. Ban said he and Kerry were jointly lobbying officials in the region to push Hamas and Israel to a cease-fire as soon as possible.

White House deputy national security adviser Tony Blinken said there must be a way forward that does not involve Hamas having the ability to "rain down rockets on Israeli civilians."

"One of the results, one would hope, of a cease-fire would be some form of demilitarization so that this doesn't continue, doesn't repeat itself," Blinken said in an interview with NPR. "That needs to be the end result."

The Hamas leader, however, rejected that idea. "Some are talking under the table about disarming the resistance. No one can take away the resistance's arms," Mashaal said.

He also dismissed Israel's assertion that it tries to avoid civilian casualties but Hamas puts them in danger by hiding weapons and fighters in civilian areas.

"The truth is that (Israeli Prime Minister Benjamin) Netanyahu could not reach the militants, so killed the civilians," Maashal said.

U.S. officials have downplayed expectations for an immediate, lasting truce between Israel and Hamas. But Kerry said limited progress has been made.

"We're doing this for one simple reason: The people in the Palestinian territories, the people in Israel, are all living under the threat or reality of immediate violence," Kerry told reporters after a meeting of just over an hour with Abbas in the West Bank town of Ramallah. "And this needs to end, for everybody. We need to find a way forward that works. And it's not violence."

He also offered "profound gratitude" to what he described as 30,000 Israelis who lined Jerusalem streets on Wednesday for the funeral procession of Israeli soldier Max Steinberg, a 24-year-old American from the San Fernando Valley of Southern California who was killed in the fighting. "That's a remarkable statement - we're very grateful," Kerry said.

Kerry later met with Netanyahu for nearly two hours in Tel Aviv, but made no comments and headed immediately back to Cairo.

Israel launched a massive air campaign on July 8 to stop relentless Hamas rocket fire into Israel and expanded it last week to a ground war aimed at destroying tunnels the military says Hamas has constructed from Gaza into Israel for attacks against Israelis.

Israel and the U.S. back an unconditional cease-fire proposal that has been offered by Egypt, which would be followed by talks on a possible new border arrangement for Gaza. Israel and Egypt have severely restricted movement in and out of Gaza since Hamas seized the territory in 2007.