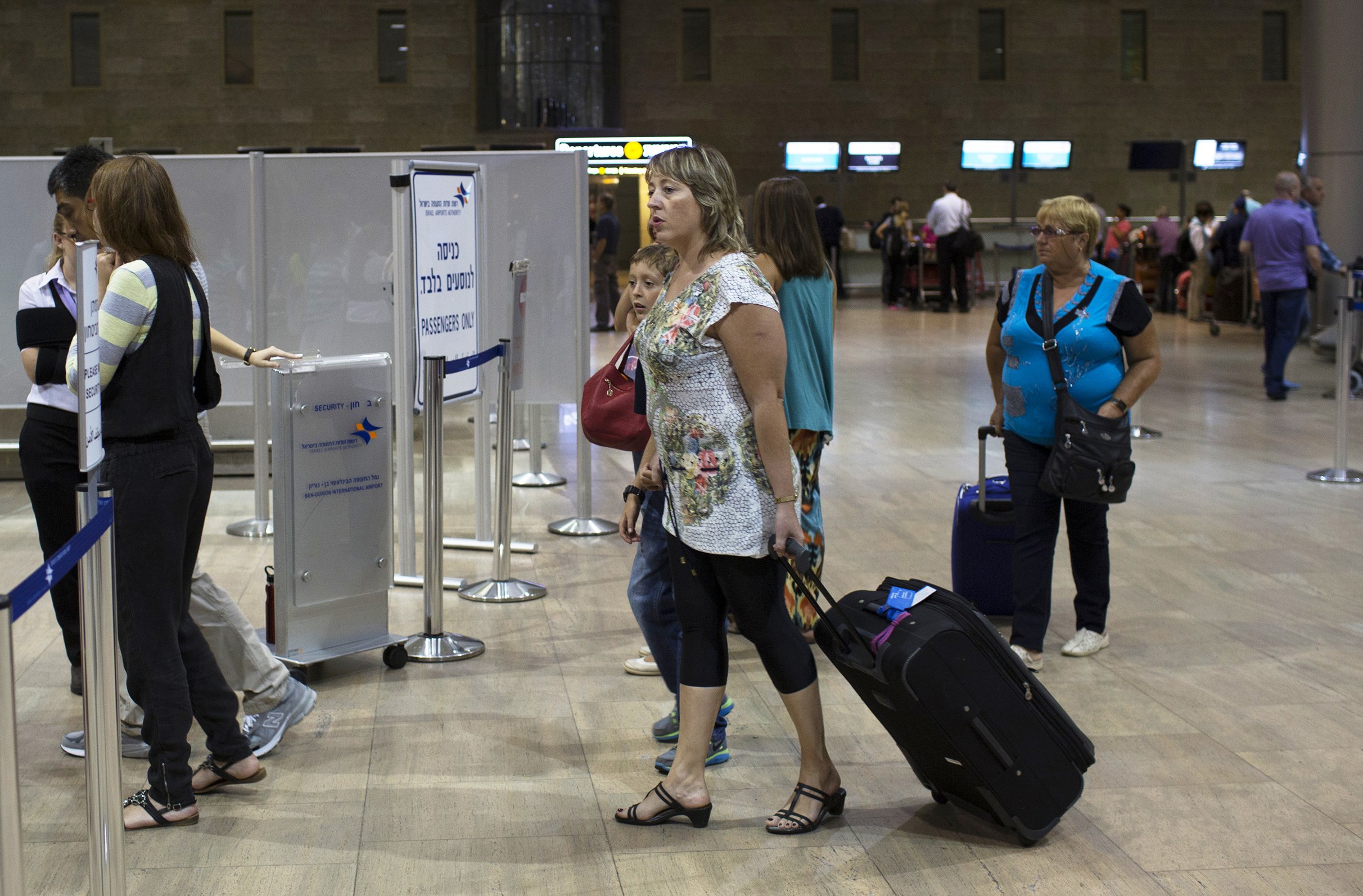 WASHINGTON -- The Federal Aviation Administration lifted its ban Wednesday on U.S. flights in and out of Israel, which the agency had imposed out of concern for the risk of planes being hit by Hamas rockets.

"Before making this decision, the FAA worked with its U.S. government counterparts to assess the security situation in Israel and carefully reviewed both significant new information and measures the government of Israel is taking to mitigate potential risks to civil aviation," the FAA said. "The agency will continue to closely monitor the very fluid situation around Ben Gurion Airport and will take additional actions as necessary."

The FAA said its prohibition was in response to a rocket strike that landed about a mile from the airport as hostilities between Israel and Hamas militants raged on, with hundreds of Palestinians and dozens of Israelis killed in intense fighting. It also came after a Malaysian jetliner was shot down over Ukraine where pro-Russia separatists have been battling government forces. Rebels shot down two Ukrainian fighter jets on Wednesday.

The directive, which was extended Wednesday for 24 hours, applied only to U.S. carriers. The FAA has no authority over foreign airlines operating in Israel.

Correspondent Don Dahler told "CBS This Morning" it's not clear how many U.S. carriers will resume flying to Israel. Normally, 400-500 flights arrive and depart daily from Ben Gurion International Airport. Yesterday, there were only 200, with roughly half the number of passengers as on a typical day.

Delta Air Lines, which diverted a jumbo jet away from Tel Aviv before Tuesday's ban by the FAA, will not necessarily resume flights to Israel even if U.S. authorities declare the area safe, the airline's CEO said before the FAA lifted the ban.

CEO Richard Anderson said Delta would of course obey FAA orders but would continue to make its own decisions about safety.

"We appreciate the advice and consent and the intelligence we get, but we have a duty and an obligation above and beyond that to independently make the right decisions for our employees and passengers," Anderson said on a conference call with reporters. "Even if they lift" the prohibition on flying in and out of Ben Gurion Airport, "we still may not go in depending on what the facts and circumstances are."

Anderson declined to discuss specifically how the airline would make the decision to resume the flights and spoke only in general terms. He said the airline decides whether flights are safe to operate "on an independent basis, so we will evaluate the information we have and we will make the judgment that our passengers and employees rely on us to make for them every day."

The ban angered many Israelis, who say the unguided rocket that destroyed a home near the airport was just a lucky shot. But Hamas declared the FAA's decision to ban American flights a victory.

Amos Yandlin, Israel's former head of military intelligence, agrees. "Unfortunately, I think it's a victory," he told CBS News. "But as I always emphasize . . . it's not a big victory. We can deal with it.

"To tell you the truth, I was surprised that it wasn't done before. [But] the fact that the 'Iron Dome' was so effective enabled them to continue with the flights."

The ban was criticized by Republican Sen. Ted Cruz of Texas, who questioned whether President Obama used a federal agency to impose what he characterized as an economic boycott on Israel.

"The facts suggest that President Obama has just used a federal regulatory agency to launch an economic boycott on Israel, in order to try to force our ally to comply with his foreign-policy demands," Cruz said in a statement in which he posed five questions about the agency's actions, including whether it was politically motivated. Cruz said later Wednesday he would block Senate confirmation on all State Department nominees until his questions were answered.

Harf said, "There's no place for these kinds of political stunts in confirming nominees for critical national security positions."

The CEO of Middle East carrier Emirates said after the shoot-down in Ukraine of a Malaysia Airlines jet last week that global airlines need better risk-assessment from international aviation authorities. Delta, however, seems more inclined to go it alone.

Cruz said tourism is an $11 billion industry for Israel and the flight ban could be a crippling blow. Long before the flight prohibition, the fighting could have affected tourism in Israel.

Harf, the State Department spokeswoman, said the FAA makes its "decision based solely on the security and safety of American citizens, period."

Catherine Frazier, a spokeswoman for Cruz, said the Obama administration's foreign policy was itself "ridiculous and offensive."

In a statement, the powerful American Israel Public Affairs Committee, which holds considerable sway with Congress, expressed concerns with the FAA ban and urged a review of the policy.

AIPAC said Israel has been subjected to hundreds of rockets the past two weeks and air travel has been safe and uninterrupted.

"The American people have shown in this difficult moment that they stand strongly with our democratic ally," AIPAC said. "Now is not the time to send the entirely wrong message with a ban on flights to Israel."

"We have a broad and deep security network around the world," Anderson said. "We have security directors that work for Delta in all the regions of the world, and we have a very sophisticated capability and methodology to manage these kinds of risks, whether it's this or a volcano or a hurricane."