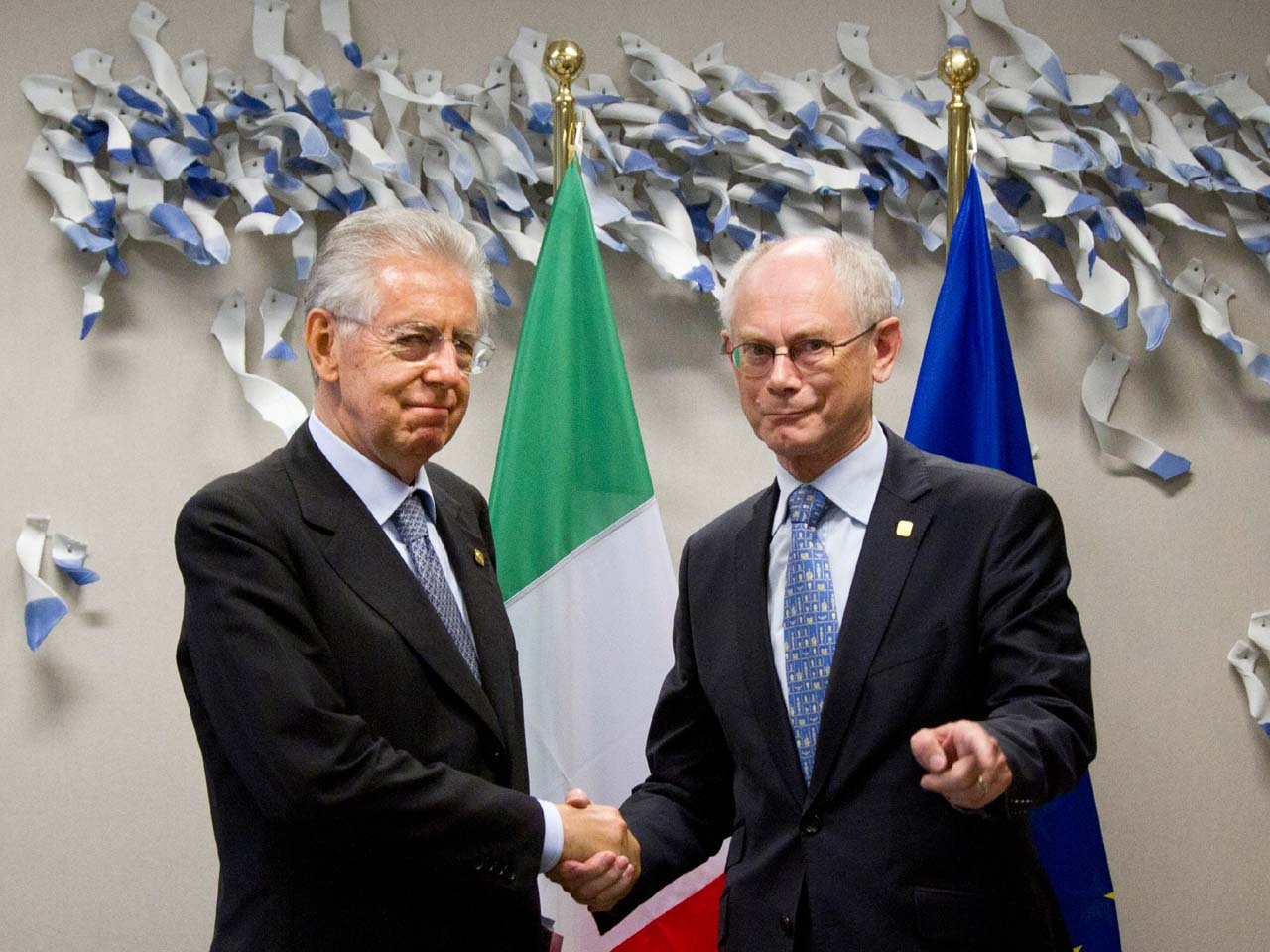 (AP) BRUSSELS - Economic growth was the mantra Thursday as European leaders gathered to sign off on measures to boost it around the continent. Yet expectations of a breakthrough on the explosive issue of pooling European debt have fallen by the wayside.

European Commissioner for Economic Affairs Olli Rehn told reporters he expected leaders would agree on new growth measures for Europe, as well as taking some kind of action to reduce borrowing rates for Spain and Italy, which are approaching unmanageable levels.

"I expect that there will be a decision on a further step toward rebuilding the economic and monetary union," he said shortly before the summit was to start. "We also need concrete decisions on a short term stabilization of financial markets, especially sovereign debt markets."

German Chancellor Angela Merkel, who has resolutely opposed the issuing of mutual debt - known as Eurobonds - is the woman to watch, fear or confront at the two-day summit.

Many leaders have backed the idea of eurobonds as a key way of fixing the eurozone's problems as they would help lower indebted countries' borrowing costs. But Merkel has been reluctant to expose her country to new potential costs, and is concerned that eurobonds may minimize the pressure on countries like Greece and Spain to reform their economies.

"I think we should stop talking about eurobonds now because, with the German government's 'no,' with this definitive 'no' from Mrs. Merkel, eurobonds are now a non-issue," the president of the European Parliament, Martin Schulz, said Thursday.

"I personally continue to see it as a good solution, a sensible one, but there is no sense in conducting theoretical debates when the house is on fire," Schulz told Germany's ZDF television.

Markets and investors, who felt burned by past promises they saw as too weak to solve Europe's debt crisis, want a breakthrough this week to ensure the region's debt crisis doesn't engulf the world economy, but they aren't expecting one. Any breakthrough would hinge on Merkel, who brings the weight of the continent's biggest, strongest economy with her to the meeting in Brussels.

The France-sponsored plan to stimulate growth, and so increase government tax revenues, is relatively modest. Although worth 130 million euro ($162 million), it is expected to consist mostly of European funds already earmarked for development.

Far more urgent, in the short term, is finding a way to keep the cost of borrowing money sustainable for weaker EU countries.

The leaders of Italy, France and Spain are pressing Germany to agree to share debts before markets push the 17-nation eurozone any closer to collapse. The EU's top officials and the International Monetary Fund have argued the same.

Merkel isn't likely to budge. She has argued repeatedly - as recently as Wednesday - that short-term solutions such as pooled debt or a more active European Central Bank are useless unless governments prove they can manage their budgets. She wants a grand, ambitious political union first.

European Parliament head Schulz, who is a member of Germany's center-left opposition Social Democrats, urged the EU leaders to "talk about a debt redemption fund, or we should perhaps talk about a banking license for the European Stability Mechanism, there are solutions other than eurobonds that are possible."

While they may not be able to change Merkel's mind, other leaders who avoided confronting her in the past may not hold back this time.

Italy's Prime Minister Mario Monti, at risk of losing his job because of voter frustration with austerity measures, has been increasingly outspoken.

Speaking in Brussels on Wednesday night, he said Italians have made great sacrifices and gotten their country's deficit under control but the yields on Italian debt have soared to one-year highs anyway.

If Italians become discouraged that their efforts aren't helping, then Monti warned of "political forces which say `let European integration, let the euro, let this or that large country go to hell', which would be a disaster for the whole of the European Union."

Monti said he's ready to work until Sunday night - instead of the scheduled Friday end of the summit - to ensure that leaders produce a growth package convincing enough to calm financial markets.

"The most urgent issue is financing," Mariano Rajoy said. "We can't continue for a long time to finance ourselves with these prices; there are many institutions and financial entities that don't have access to financial markets."

Simon Tilford of the Center for Economic Reform said, "We're seeing the French, Italians and Spanish showing a greater readiness to act as one."

In the past, they were reluctant to isolate Merkel, he said.

"But that flexible approach ... has delivered very little. They have grown alarmed and frustrated," he said. "If anyone is to lead the charge, it may be Monti, he is the one who has the most credibility on the European stage" - and the most to lose if pressure on Merkel fails.

While France has been the traditional partner - and counterweight - to Germany in European dealings in the past, President Francois Hollande has just seven weeks of governing under his belt, and built his career as a consensus-builder. And his country's economy is weaker, with growth forecast at just 0.4 percent this year.

Hollande was grinning broadly Wednesday night at the one concession he has been able to wring from Merkel so far, an agreement to put growth on the European agenda alongside austerity measures.

Merkel, standing stiffly at Hollande's side ahead of bilateral talks in Paris, agreed to push for the 130 billion euro ($162 billion) stimulus package that Hollande has vaunted, even though it is largely just a re-packaging of existing EU funds.

Shortly after his meeting with Merkel, Hollande talked to President Barack Obama about their common push for growth.

Even if leaders of all 26 other EU nations line up against Merkel, she cannot bend very far.

She needs the German parliament to approve the eurozone's permanent rescue fund, the European Stability Mechanism, and a European budget-discipline pact, both expected to happen Friday. And many measures floated as possible solutions could require changes to Germany's constitution.

Amid calls for Greece or other Mediterranean states - and even Germany - to pull out of the euro, Merkel argued Wednesday for greater unity.

"We need more Europe. Markets are waiting for that."

But she also insisted that jointly issued eurobonds - which some experts say would help defuse the prospect of unaffordable bailouts for Spain or Italy by making their debt less expensive to pay off - would be "economically wrong and counterproductive" before governments have shown they can comply with budget rules.

"Supervision and liability must go hand in hand," she said.

CBS News poll: In South Carolina, Biden's lead narrows, with Sanders and Steyer on his heels