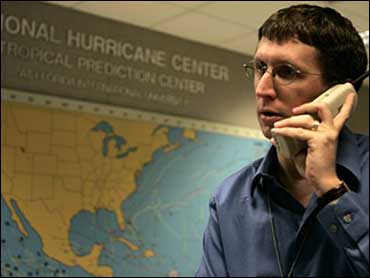 Gamma was expected to sweep along the coasts of Honduras, Belize and Mexico's southern Yucatan peninsula this weekend before heading toward Cuba's western tip and then southern Florida.

The storm wasn't expected to reach Florida until Monday afternoon.

Tropical storm warnings were issued for the coasts of Belize, southern Mexico and Honduras' Bay Islands.

Gamma is on a similar path to last month's Hurricane Wilma, which battered Cancun and Playa del Carmen and left thousands of tourists stranded for days — although Gamma was expected to turn east without hitting those beach resorts.

National Hurricane Center meteorologist Richard Knabb says the system weakened, then regenerated itself – it's barely a tropical storm with winds of about 40 miles per hour, reports CBS Radio News. Gamma is moving erratically, but Knabb says there's a chance is could head toward the sunshine state early next week and that Floridians should restock hurricane kits – just in case.

It spawned rains throughout Central America, including flooding and landslides in Honduras that killed two, left four missing and prompted the government to evacuate hundreds from coastal towns.

In a news conference, President Ricardo Maduro said soldiers are bringing in food, water, medicine and blankets to affected areas.

"The most important thing is to save human lives," Maduro said.

Forecasters said Gamma could dump up to 10 inches of rain on some areas.

In Costa Rica, heavy rains prompted authorities to evacuate 600 people from communities in the south, said Reynaldo Carballo, a government spokesman. The refugees are staying in state-run shelters, he said.

Gamma extended the Atlantic's record-breaking storm season. The previous record of 21 named storms had stood since 1933.