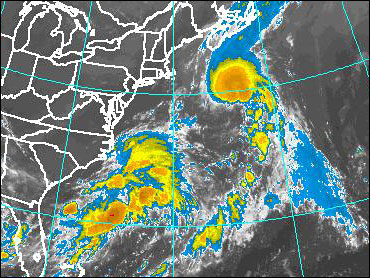 Tropical Storm Chantal strengthened quickly Tuesday between Bermuda and Massachusetts, becoming the third named storm of the Atlantic hurricane season. It could bring heavy rain to Canada but was not expected to threaten the United States, forecasters said.

The storm had top sustained winds of 50 mph at 11 a.m. EDT. It was centered about 660 miles southwest of Cape Race, Newfoundland, according to the National Hurricane Center. It was moving north-northeast at about 29 mph.

Chantal was expected to be short-lived as a tropical storm, possibly weakening later in the day. Its rain could affect Newfoundland late Wednesday or early Thursday, but it will not be very strong, hurricane specialist Eric Blake said.

Federal government forecasters said in late May that they expect a busier than normal Atlantic hurricane season, with 13 to 17 tropical storms and seven to 10 of those becoming hurricanes. A tropical storm has sustained winds of at least 39 mph and becomes a hurricane when those winds reach 74 mph.

Last year, there were 10 tropical storms in the Atlantic and five hurricanes, none of which made landfall in the United States. It was a mild year in comparison with the devastating 2005 season, which set a record with 28 named storms, 15 of them hurricanes, including Hurricane Katrina.

The Atlantic hurricane season, which officially runs from June 1 to Nov. 30, averages 11 named storms, with six of them becoming hurricanes and two major hurricanes.