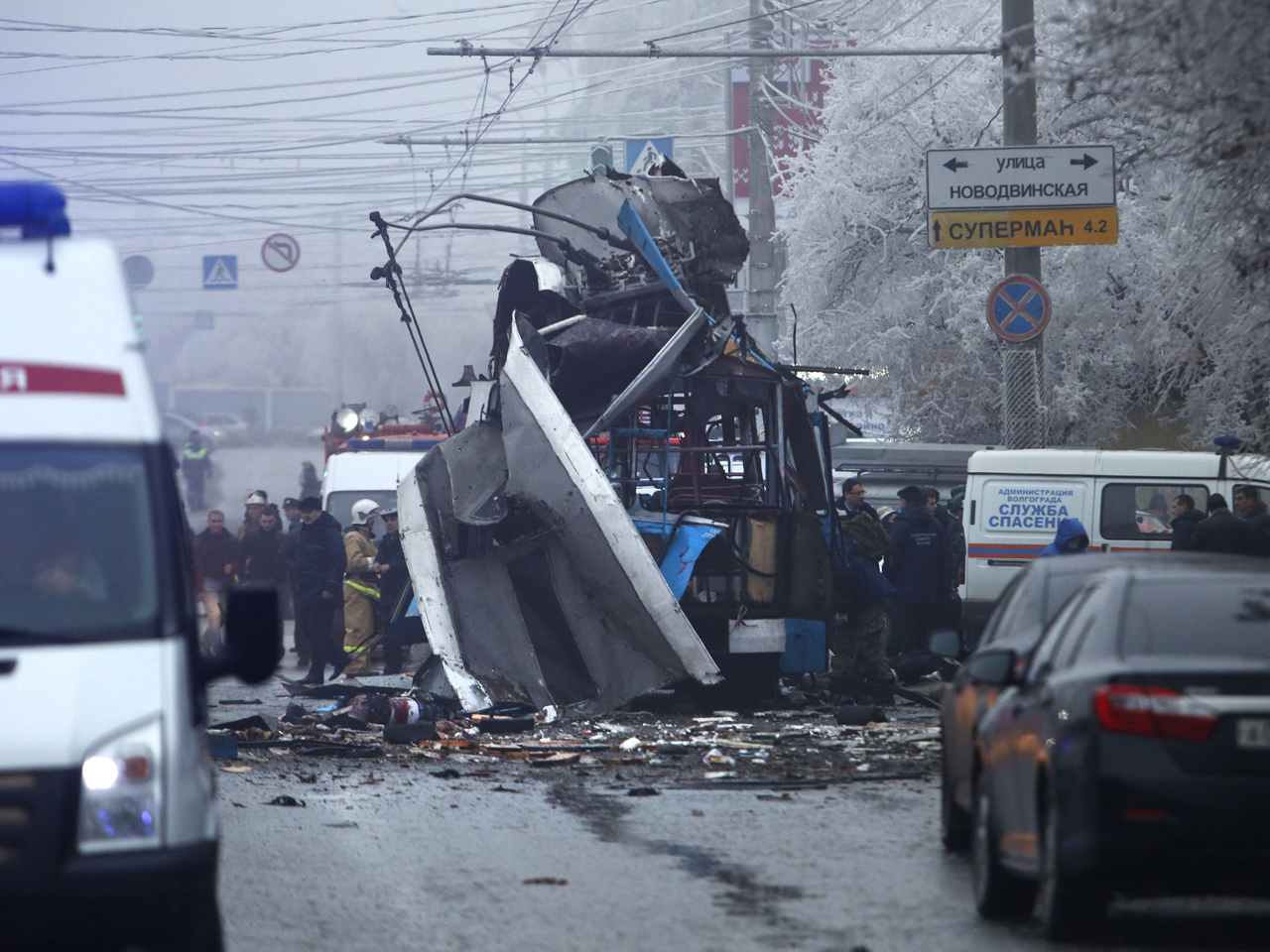 MOSCOW -- A suicide bomber killed 14 people aboard an electric bus in the southern Russian city of Volgograd during the Monday morning rush hour, and authorities believe it was the work of the same group that set off a bomb at the railway station a day earlier.

Together more than 30 people were killed in the explosions,  putting the city of one million on edge and highlighting the terrorist threat Russia is facing as it prepares to host February's Winter Games in Sochi, President Vladimir Putin's pet project. While terrorists may find it hard to get to the tightly guarded Olympic facilities, the bombings have shown they can hit civilian targets elsewhere in Russia with shocking ease.

Putin on Monday ordered law enforcement agencies to increase security in Volgograd and nationwide after the two deadly bombings, the Kremlin said.

Putin issued several instructions to a committee that coordinates counterterrorism efforts "to strengthen security Russia-wide and specifically in the Volgograd region," the Kremlin said. It did not describe the instructions.

The White House said Monday the United States "would welcome" the opportunity for closer security cooperation with Russia for the Winter Olympics following the attacks.

Spokeswoman Caitlin Hayden says the U.S. has already offered "full support" to Russia as it makes security preparations for the games. But she says the U.S. would welcome "closer cooperation" to ensure the safety of athletes, spectators and other participants.

Hayden also says the U.S. condemns the attacks and offers its deepest condolences to the victims' families.

While security in Sochi itself will be incredibly strong, Zarate reports terrorist leaders in the Caucus’ and other unstable regions have talked about hitting softer targets nearby like Volgograd.

Following Sunday's explosion, the Interior Ministry ordered police to beef up patrols at railway stations and other transport facilities across Russia.

Putin on Monday summoned the chief of the main KGB successor agency and the Interior Minister to discuss the situation, and sent the former to Volgograd to oversee the probe.

Volgograd, located about 400 miles northeast of Sochi, serves as a key transport hub for southern Russia, with numerous bus routes linking it to volatile provinces in Russia's North Caucasus, where insurgents have been seeking an Islamic state.

Vladimir Markin, the spokesman for Russia's main investigative agency, said Monday's explosion involved a bomb similar to the one used in Sunday's attack at the city's main railway station.

"That confirms the investigators' version that the two terror attacks were linked," Markin said in a statement. "They could have been prepared in one place."

Markin said a suicide attacker was responsible for the bus explosion, reversing an earlier official statement that the blast was caused by a bomb left in the vehicle's passenger area. At least 14 people were killed and nearly 30 were wounded, according to public health officials.

Officials did not name names and no one has claimed responsibility for either bombing, but they came several months after Chechen rebel leader Doku Umarov threatened new attacks against civilian targets in Russia, including the Olympics in Sochi.

Suicide bombings and other terror attacks have rocked Russia for years, but most recently have been confined to the North Caucasus region. The successive attacks in Volgograd signaled that militants may be using the transportation hub as a renewed way of showing their reach outside their restive region.

The city, formerly called Stalingrad, also serves as an important symbol of Russian pride because of a historic World War II battle in which the Soviets turned the tide against the Nazis.

"Volgograd, a symbol of Russia's suffering and victory in World War II, has been singled out by the terrorist leaders precisely because of its status in people's minds," Dmitry Trenin, the head of the Carnegie Endowment's Moscow office, said in a commentary posted on the organization's website.

Monday's explosion ripped away much of the bus's exterior and shattered windows in nearby buildings. It virtually paralyzed public transport in the city, forcing many residents to walk long distances to get to work.

Russian authorities have been slow to introduce stringent security checks on bus routes, making them the transport of choice for terrorists in the region. A few months ago authorities introduced a requirement for intercity bus passengers to produce identification when buying tickets, like rail or air passengers, but procedures have remained lax and some of the routes aren't controlled.

Even tight railway security is sometimes not enough. In Sunday's suicide bombing the attacker detonated in the crowd in front of the station's metal detectors.

A suicide bus bombing in Volgograd in October killed six people. On Friday, three people were killed when an explosives-rigged car blew up in the city of Pyatigorsk, the center of a federal administrative district created to oversee Kremlin efforts to stabilize the North Caucasus region.

In Sunday's railroad station blast, the bomber detonated explosives just beyond the station's main entrance when a police sergeant became suspicious and rushed forward, officials said. The officer was killed by the blast, and several other policemen were among some 40 people wounded.

The Interior Ministry ordered police to beef up patrols at railway stations and other transport facilities across Russia. Putin on Monday summoned the chief of the main KGB successor agency and the interior minister to discuss the situation, and sent the former to Volgograd to oversee the probe.

Russia in past years has seen a series of terror attacks on buses, trains and airplanes, some carried out by suicide bombers.

Umarov, who had claimed responsibility for the 2010 and 2011 bombings, ordered a halt to attacks on civilian targets during the mass street protests against Putin in the winter of 2011-12. He reversed that order in July, urging his men to "do their utmost to derail" the Sochi Olympics, which he described as "satanic dances on the bones of our ancestors."

The International Olympics Committee expressed its condolences over Sunday's bombing in Volgograd, but said it was confident of Russia's ability to protect the Games.

Russian Olympic Committee chief Alexander Zhukov said Monday there was no need to take any extra steps to secure Sochi in the wake of the Volgograd bombings, as "everything necessary already has been done."

Russian authorities have introduced some of the most extensive identity checks and sweeping security measures ever seen at an international sports event.

Anyone wanting to attend the games that open on Feb. 7 will have to buy a ticket online from the organizers and obtain a "spectator pass" for access. Doing so will require providing passport details and contacts that will allow the authorities to screen all visitors and check their identities upon arrival.

The security zone created around Sochi stretches approximately 60 miles along the Black Sea coast and up to 25 miles inland. Russian forces include special troops to patrol the forested mountains flanking the resort, drones to keep constant watch over Olympic facilities and speed boats to patrol the coast.

The security plan includes a ban on cars from outside the zone from a month before the games begin until a month after they end.