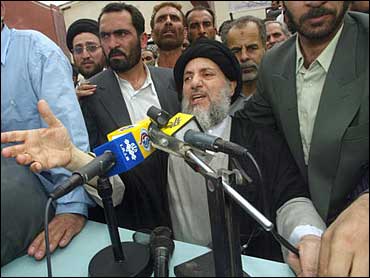 The leader of the largest Iraqi Shiite Muslim group opposed to Saddam Hussein returned to his homeland on Saturday after two decades in exile and called for Iraq to become an Islamic state.

Ayatollah Mohammad Baqir al-Hakim condemned religious extremism in the same speech. He rejected any foreign-installed government for Iraq, but did not mention the United States directly.

Al-Hakim heads the Supreme Council of the Islamic Revolution of Iraq which, reports CBS News Correspondent Elizabeth Palmer, counts among its followers some of the most fundamentalist Muslims in Iraq.

He rolled across the Iranian frontier into Iraq at the Shalamjah border crossing. Al-Hakim had been in exile in Iran and under protection of its Shiite religious leaders since 1980.

"I am a soldier of Islam, serving all the Iraqi people," he told a crowd of about 10,000 supporters hours later in the southern city of Basra, a Shiite stronghold. But, he added, "We don't want extremist Islam, but an Islam of independence, justice and freedom."

But, notes Palmer, his promises ring hollow to both non-Shiite Iraqis and the Bush administration, who point to the 23 years al-Hakim spent in exile close to the radical mullahs in Iran and sending armed militia back from Tehran to organize support in Iraq.

Washington is wary of any Iranian-style theocracy taking control in Iraq, and is particularly jittery about the possibility that a democratic vote might produce a conservative, Islamic-oriented government with close ties to Iran's anti-American Shiite clerics. Washington has accused Tehran of meddling in Iraqi affairs.