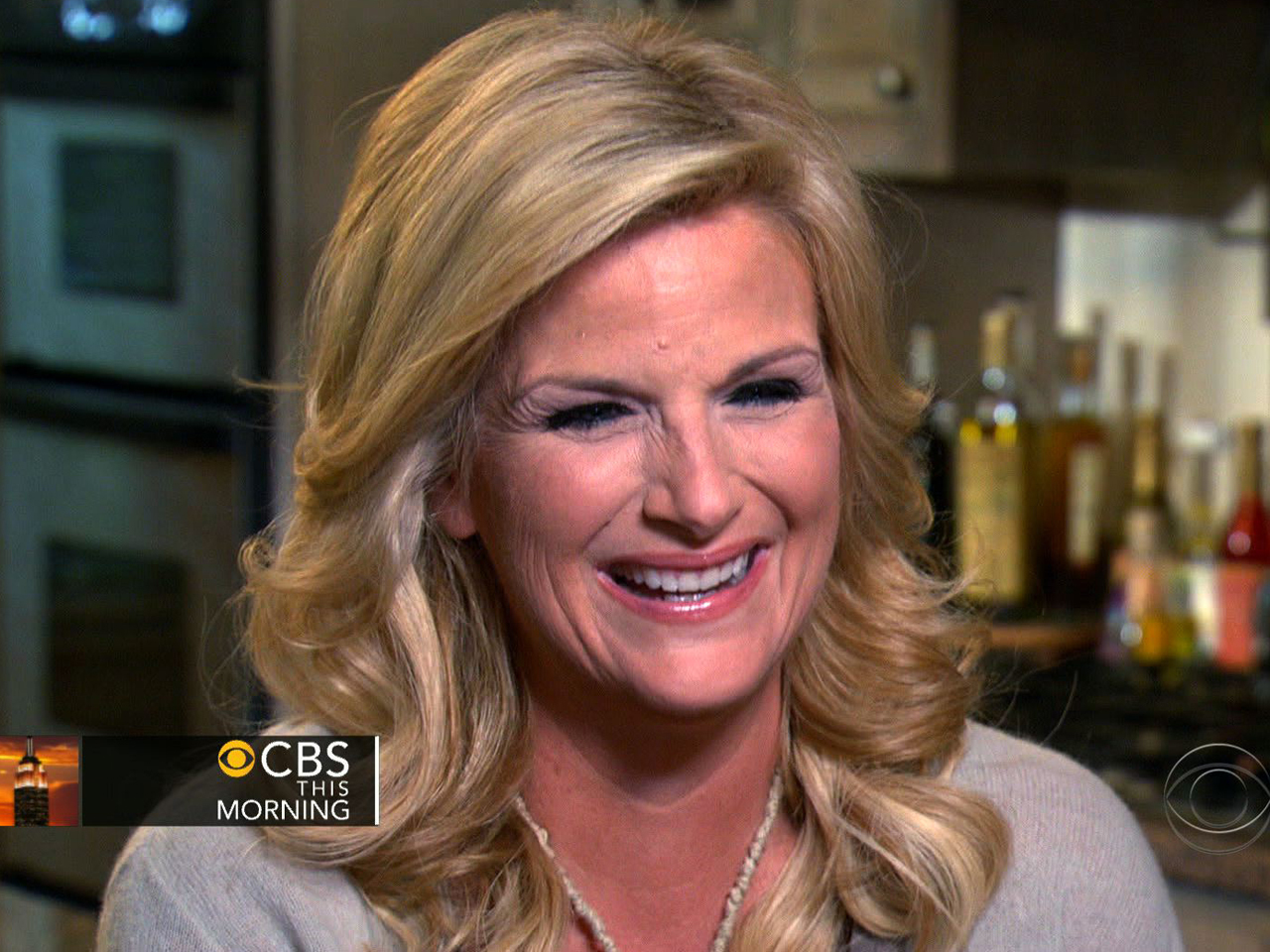 (CBS News) It's a good time to be Trisha Yearwood. For one thing, the country star has changed her attitude toward food -- and it's paying off.

CBS News' Jeff Glor went to Yearwood's home in Nashville to talk about that, and other things country.

Yearwood's best-selling cookbook "Home Cooking with Trisha Yearwood" has just gone to paperback, she has an award-winning cooking show on the Food Network, and her singing career -- which has by design been on the back-burner for a while now -- is beginning to simmer again.

Before she became a country star, Yearwood grew up on country cooking, so when she launched a new phase of her career, it was really just an old part of her life. As a college student at Nashville's Belmont University, Yearwood realized how much she missed simple homemade meals. She called her mother often for recipes.

Yearwood told Glor, "We are the family, like most families, who have those recipes written down on a scrapbook napkin, and it's in a shoebox. I mean, and you look in the shoebox for 10 minutes before you find what you're looking for. I thought, 'We'll have 'em all in one place.' And it turned out to be one cookbook. And then two cookbooks. And now, a show. So it's really been a happy accident."

Most of the recipes she started with were hearty, but not exactly healthy. That's changed recently. Now eight years into her marriage with country superstar Garth Brooks, both have improved their eating. Yearwood has lost 35 pounds.

Glor asked, "Was there a moment when you said, 'I need to get healthier'?"

"Yeah," Yearwood said. "I mean, my mom passed away from breast cancer in October of 2011. I lived with her for a couple of months during that time. And I ate. That was my coping mechanism, you know? I just ate. And for that whole year -- I just -- I just didn't care, you know? It was really just -- I'm just tired of feeling tired. I'm tired of the way I feel. And I really just-- something clicked in me."

She says that click was the realization that not every meal had to be the big meal.

Speaking of some comfort food recipes, Yearwood said, "This is not how you eat every day. This is when you want to indulge. If you're going to have macaroni and cheese, don't have it every day. Have it for a special occasion. And then eat -- eat better most of the time. I think sort of the new South lives that way."

Aske how she would you describe the cuisine of the new South, Yearwood said, "It's a balance. It's, if I'm gonna have something like homemade cake, like, my mother made German chocolate cake. I make it for Garth every year on his birthday. But I don't make it the rest of the year. I go, 'I'm gonna have a piece on your birthday. And I'm gonna enjoy every bite of it. And then I'm not gonna have it'."

Brooks says he has changed what he eats, too. Yearwood said Brooks says he's "Gegan," which, Yearwood said, "means he eats what Garth eats. Because he'll say, 'I don't really-- you know, I don't really do meat. And I don't do much dairy any more.' And then he's, like, eating M&M's. You know, he doesn't really get it. I mean -- you know, I'm sure he's watching. 'I love you honey, but you really don't get it.' So -- but I think for him, it's been an education. I think he is learning."

Yearwood hasn't released a new album in six years. That also is about to change.

She's planning a new solo album, and eventually a tour, she told CBS News, along with Brooks.

Yearwood said, "This will be our third go-around. But -- but it'll be a whole different ball game, you know, as man and wife to go do this together. So I -- I'm looking forward to it."

She also revealed a little more information about an upcoming collaboration.

Glor mentioned a Kelly Clarkson tweet in which she posted a photo showing Yearwood's name and Reba McEntire's name in the studio.

Asked about what's happening, Yearwood said, "I don't know. We have become friends. And I love both of them. And -- and we have been toying with the thought of -- working together. And -- Kelly's working on a little something that we sang on."

Glor asked, "So do you want people to think of you right now as a singer or a cook?"

Yearwood said, "Yes! I mean, if you said, 'Trisha, you have to pick one thing that you can do every day for the rest of your life,' I would pick music. Absolutely. That is what feeds my soul."