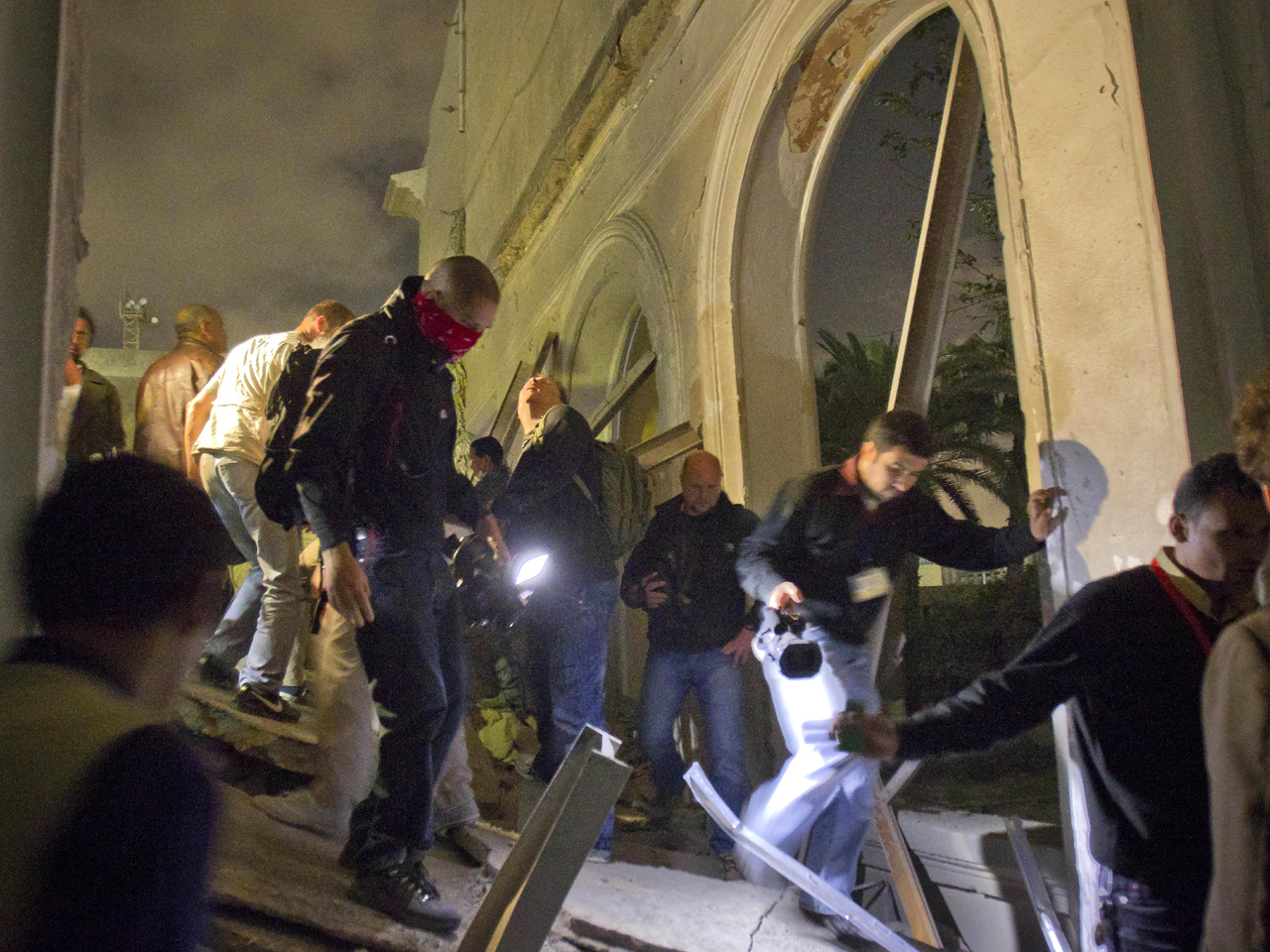 TRIPOLI, Libya - NATO warplanes struck a command center in Tripoli early Tuesday in the heaviest bombing of the Libyan capital in weeks, while rebels — capitalizing on other NATO air strikes — reported battlefront gains that could ease the siege of the port city of Misrata.

The NATO planes struck what the alliance called a command and control facility in downtown Tripoli, according to Italian Brig. Gen. Claudio Gabellini.

"All NATO targets are military targets," said Gabellini, who serves on NATO's planning staff at the headquarters in Naples.

He denied that NATO was targeting Libyan leader Muammar Qadaffi, saying "We have no evidence about what Mr. Qadaffi is doing right now, and to tell you the truth we're not really interested."

Gabellini also said 30 regime military targets have been hit since May 2 around Misrata, which has been under siege by Qadaffi's forces for two months. The targets included 12 tanks, three self-propelled guns, three multiple-rocket-launchers, and various vehicles, Gabellini said.

"Although it's a real challenge for us to strike military targets in and around population centers like Misrata, while minimizing the risks to innocent civilians, we have been working hard to prevent attacks by pro-Qadaffi forces," Gabellini said.

In Misrata, the rebel's only urban stronghold in western Libya, a doctor said rebel forces had pushed outward to Dafniya, a town on western outskirts.

The doctor, who asked not to be identified for fear of reprisals, said fighting was taking place both in Dafniya and near the airport south of Misrata. Were the rebels able to punch through past Dafniya, it would increase the prospects of a further advance through the coastal town of Zlitan and toward Tripoli itself.

The rebels posted video clips calling on Qadaffi's forces in the area to surrender and saying they had advanced about 15 miles (25 kilometers) outward from central Misrata.

"We are after you Qadaffi," one of the fighters in the video said.

In eastern Libya, rebels reported ongoing fighting between the towns of Ajdabiya and Brega.

A rebel commander, Zakaria al-Mismari, told reporters that Qadaffi's forces had advanced on their positions with about a dozen vehicles on Monday, but were beaten back.

The rebel army has been bogged down for weeks near Ajdabiya, unable to move on to Brega, which has an oil terminal and Libya's second-largest hydrocarbon complex.

Planes were heard from Ajdabiya later Monday, after the rebels said they had retreated because they were told NATO was launching airstrikes against Qadaffi forces there.

Rebel appeals for heavier arms from abroad have not met any response, although NATO is carrying out airstrikes on regime forces as many countries demand that Qadaffi — Libya's autocratic ruler for 42 years — relinquish power.

In the latest strike, NATO planes hit at least four sites in Tripoli, setting off explosions that thundered through the city overnight. One strike hit a building that locals said was used by a military intelligence agency. Another targeted a government building that officials said was sometimes used by parliament members.

It was not immediately clear what the other two strikes hit, but one of them sent plumes of smoke that appeared to come from the sprawling compound housing members of Qadaffi's family.

Between explosions, an aircraft dropped burning flares. Some residents responded by raking the sky with gunfire and beeping their horns.

The two sides have been locked in a standoff, with the rebels controlling most of eastern Libya, and Qadaffi most of the west, including Tripoli. Exceptions in the west include pockets of embattled rebel-held towns along the border with Tunisia, and Misrata on the coast.

"We have succeeded in taking out a significant part of Qadaffi's military, we have significantly degraded his war machine," NATO Secretary General Anders Fogh Rasmussen said Monday during a visit to Atlanta. "So far our operation has been a success but there's still work to do."

In Tripoli, government escorts did not allow reporters near the site of one building that was hit in the NATO attack. Residents said the building, which had buckled from the bombing, was used by a military intelligence agency.

Reporters, who may not leave their Tripoli hotel without government escorts, were shown damage done to a nearby hospital. A physician, Dr. Mustafa Rahim, said a 4-year-old boy was badly injured, but would not allow reporters to see him, saying he was in intensive care.

Another strike targeted a building — struck once previously — that two employees said was used by parliament members and housed a library for research into Qadaffi's writings.

A spokeswoman for the U.N. High Commissioner for Refugees, Melissa Fleming, told reporters in Geneva on Tuesday that any boat leaving Libya should be considered "a boat in need of assistance."

Fleming said a senior Somali diplomat in Tripoli told the agency that 16 bodies, including those of two babies, have so far been retrieved from a boat carrying 600 people that sank just outside the Libyan capital Friday.