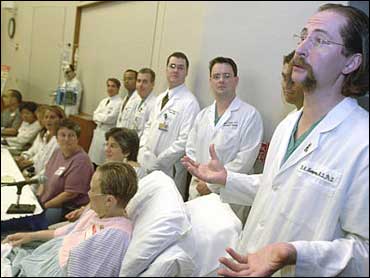 Three kidney donors and the three people who received their organs had an emotional meeting four days after the carefully choreographed transplant surgeries.

"We each have a piece of each other inside us," recipient Germaine Allum said through tears at a hospital news conference Friday.

The meeting came after what is believed to be the world's first simultaneous "triple swap" kidney transplant operation Monday at Johns Hopkins Hospital.

A woman from Miami, a woman from Pittsburgh and a teenager from Maryland, all of whom were on dialysis, came to the Baltimore hospital with donors whose blood or tissue types didn't match their own.

Nurses made matches between the three pairs from a hospital database of about 60 pairs, and doctors performed all the surgeries Monday.

Lead surgeon Dr. Robert Montgomery called the 11 hours of coordinated surgeries, with nurses rushing kidneys in labeled coolers from the donors to the recipients, "logistically, a monumental experience."

"It was really possible because these three donors desperately wanted to see their loved ones receive a kidney and were open to any possibility to make that happen," he said.

The operations were done simultaneously because organs can be damaged the longer they are kept outside the body, without blood circulating through them.

He also said it's important "to avoid any possibility of anyone backing out, someone getting in a car accident, whatever. If all the operations start at the same time, it removes those variables."

Montgomery said the patients and donors were doing well and had cleared the most dangerous time for transplant patients - the first few days after an operation.

The donors were Julia Tower, 57, from Hyattsville; Connie Dick, 41, from Latrobe, Pa.; and Paul Boissiere, 30, from Coral Gables, Fla.

The recipients were Jeremy Weiser-Warschoff, 13, from Silver Spring; Tracy Stahl, 39, from Johnstown, Pa., and Allum, 30, of Coral Gables, Fla.

The process began in October of last year, when Dick offered to donate a kidney to her sister, Stahl.

The sisters had the same blood type, but Stahl had harmful antibodies, or blood proteins, that would attack and destroy Dick's kidney tissue. Doctors tried unsuccessfully to filter Stahl's blood of the antibodies.

Stahl's antibodies precluded her from a match with nearly every patient in the database. But during tests, nurses found that Tower, who had originally wanted to donate her kidney to Jeremy, the son of her friends, had a rare tissue type that was compatible with Stahl's.

"That bond (between Stahl and Tower) became the centerpiece of the whole exchange," Montgomery said. It also made a triple swap necessary, he said, because Stahl's sister, Dick, wasn't a match for Jeremy.

In Jeremy's case, a transplant kidney he received as a baby had begun to fail this year, Montgomery said. Boissiere's blood was incompatible with his fiance, Allum, but his tissue and blood matched Jeremy's, so he became the teen's donor.

Dick had the same blood type as Allum and became her donor.

"It was a eureka-type moment when they solved this puzzle," Montgomery said of the team that matched the pairs. "If one piece fell through, it all would."

The Washington Post points out in its Saturday editions that, "Johns Hopkins was one of the first medical centers in the country to perform paired kidney exchanges, in which a willing donor whose blood or tissue type is incompatible for a sick relative or friend gives to an ailing stranger, and that person's would-be donor reciprocates in kind. Given the 55,000 Americans waiting for kidneys this year and a critical shortage of organs, the still novel approach increases a patient's chance of getting a transplant in time."

But, the Post goes on to ask, "The odds of bringing together six people...?"

And liver transplant surgeon Lew Teppeman of the New York University School of Miedicine cautioned CBS News Correspondent Paul Moniz that acceptance will occur gradually: "People will be concerned -- is the organ that someone else is going to give to my loved one just as good as the one I know i have taken good care of?"

Montgomery said 20 to 30 percent of the people on the waiting list for kidneys have harmful antibodies, which makes it difficult to find a compatible donor.

Tower said there was a special bond between all the pairs.

"I looked into Tracy's eyes (on Friday) and felt a bond that I'd never thought of before," Tower said. "It's wonderful."