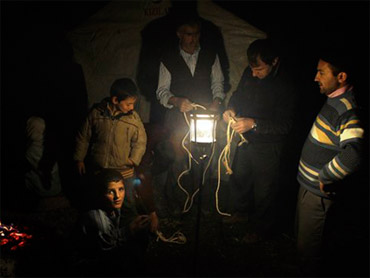 ABC-TV newsman Sam Donaldson described Delbert Paul Posey, his wife and children as a happy, well-adjusted family. They had been running one of his southern New Mexico ranches for more than two years.

So Donaldson knew something terrible had happened at his Chavez Canyon Ranch when he went to check on the family and discovered what Lincoln County Sheriff Tom Sullivan called an "obvious crime scene." Deputies found three bodies in a shallow grave.

The dead are identified as Posey, Tryone Posey and Mary Lee Schmid, 14.

In a statement, Donaldson said he and his wife, Jan, hired Posey to work at the ranch in October 2001. "Jan and I are so very, very sorry about the loss of these fine people," he said.

District Attorney Scot Key said Cody Posey would be tried as a juvenile but could be punished as an adult if convicted. He said punishment could range from probation under juvenile law to 30 years in prison, the standard sentence in New Mexico for an adult convicted of murder.

"We've never seen a triple murder, and the circumstances of a juvenile committing a crime against family members hasn't been experienced here," Key said.

The Donaldsons were in Santa Fe in northern New Mexico during the Fourth of July weekend, when the slayings apparently occurred. Sullivan said the case is still being investigated but it appeared the three had been shot Saturday.

"We didn't see them Tuesday morning or Tuesday afternoon, so I went over - and on the porch was a large stain that was instantly recognizable," Donaldson told Albuquerque television station KOB-TV. He then called the sheriff's office.

Donaldson described Cody Posey as "withdrawn, like any typical teenager."

Donaldson's ranch is in rolling pastureland about 125 miles northeast of Las Cruces.

Donaldson, a journalist with ABC since 1967, owns three ranches in south-central New Mexico and has extensive ties to the state. He grew up on a cotton farm in New Mexico and graduated from New Mexico Military Institute in Roswell.