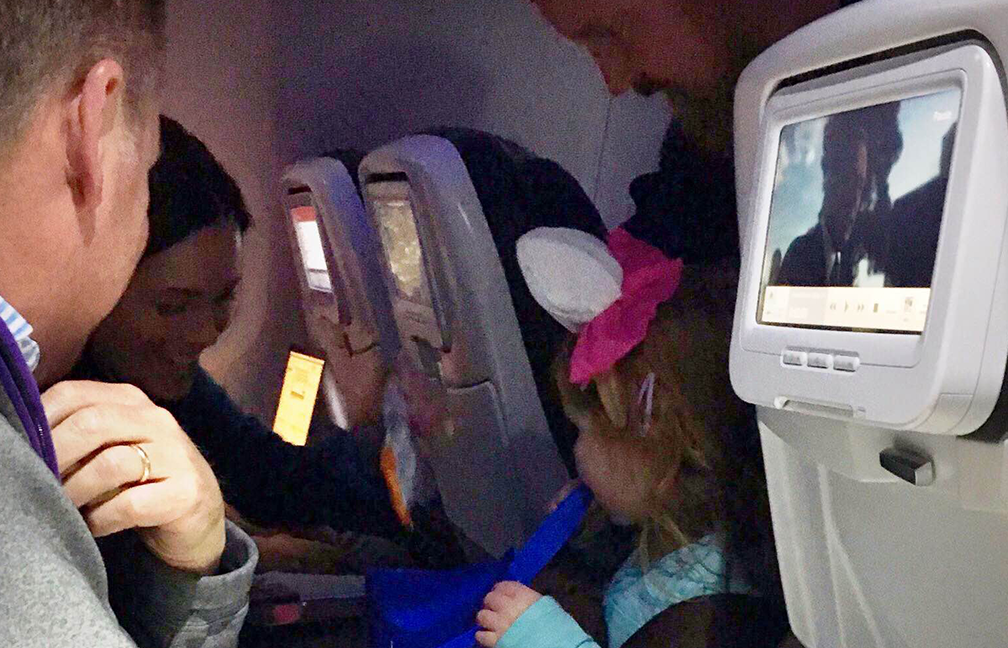 This dad really knows how to make the best out of a bad situation. He wants to remain anonymous, but thanks to a fellow airline passenger touched by his sweet gesture, we can all enjoy the story.

The man’s 3-year-old daughter Molly had been looking forward to going trick-or-treating, but her dad was saddened to realize she might be out of luck.  They would be spending Halloween evening on a flight from Boston to San Francisco.

“When I got on the plane I heard her [Molly] talking about how she couldn’t wait to trick-or-treat,” said Stephanie Kahan. “I felt sad for her because I was thinking it would be so late once we landed that she wouldn’t be able to go trick-or-treating.”

But sometimes when things get tough, getting creative can help, and that’s how this dad decided to solve the problem.

He went up and down the aisle passing out copies of this note, complete with a little treat:

“I was confused when I saw the dad handing things to passengers,” said Kahan. “But once I read the note I thought it was the sweetest thing in the world.”

From the looks of it, not only did Molly get to have a great Halloween, but so did the rest of the passengers.

“I spoke to the dad when the plane landed and he said that people were pretty confused at first but once they read the note everyone was excited to participate,” said Kahan.

Kahan tweeted out the note, along with a picture of this dad’s little “donut,” which was Molly’s costume, and discovered that other people enjoyed it as much as she did. The tweet is currently up to 130,000 likes and 74,000 retweets, but Kahan could tell it was going to go viral soon after she posted it.

“Once I noticed that my tweet had 5k likes, I knew that this was big so I wanted to let him [the dad] know what was going on,” said Kahan. “Since I had tweeted a photo of the daughter, I just wanted to be sure he didn’t want me to delete it or anything.”

The dad had no idea his Halloween plan would garner such a reaction.

“He was really surprised that the Tweet had so much engagement and definitely humbled knowing that his gesture was receiving such positive response,” said Kahan.

In the note the dad let passengers know that their participation would “be making her Halloween,” but that’s one part where he’s wrong. He made everyone’s Halloween.

Virgin America airlines has not yet responded to CBS News’ request for comment.