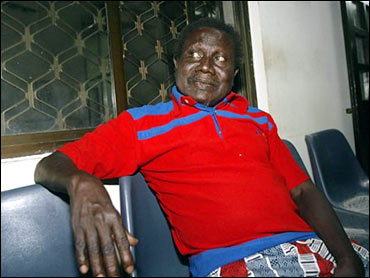 The last few dozen remaining members of an ancient indigenous tribe in the Andaman and Nicobar Islands said they raced up a mountain to escape a devastating tsunami - and avoid extinction.

The tribe was once the largest in the region with an estimated population of 10,000 in 1789. The government says only 43 Great Andamanese remain. The tribal king put the number at 50, 10 of whom are his children.

"No one was hurt. Everyone is all right," Jiroki, the king of the Great Andamanese tribe, said from a hospital in Port Blair, the capital of the Indian-administered territories.

Rescuers last week brought the remaining Great Andamanese tribespeople to Port Blair in the wake of the massive Dec. 26 earthquake and resulting tsunami.

"The water was rushing up very fast. It seemed to be following us," his wife, Surmayee, recalled. "We stayed in the forest for five days. There was some rice. We ate that. Then there was nothing, so we went hungry."

Speaking in broken Hindi, India's national language, Jiroki and Surmayee said that when the earthquake jolted their homes in a forest on Strait Island, in the south of the archipelago, they ordered the tribe to flee.

"I am the king. They follow what I say," said Jiroki, wearing a red T-shirt and shorts. "We asked the wireless operator to send a message to Port Blair. But the machine and battery had been flooded by the water. They were spoiled."

The island's jetty was smashed, so no boats could land. The tribe members' clothes, utensils and other household articles were washed away, Surmayee said.

And contrary to speculation by some anthropologists, she said the Great Andamanese did not sense the impending arrival of the tsunamis.

Anthropologists believe five tribes of the southern Indian archipelago - including the Jarawas, Shompens, Onges and Sentinelese - date back 70,000 years.

The tribe maintains links with government officials. A police officer, a wireless operator and a doctor's assistant live with them on Strait Island. Some members of the tribe work in police and government jobs in Port Blair.

The tribal leaders know their lifestyles are different from those of their ancestors.

"We don't use bows and arrows now, we have given them up. We hunt fish and pigs with spears," Surmayee said.

Surmayee was ready Friday to leave the city and return home.

But her husband, who was seeking treatment for epilepsy at the state-run hospital, disagreed.

"We feel nice interacting with the outside world. Earlier our heart was only in hunting," Jiroki said. "There were no movies, nothing."