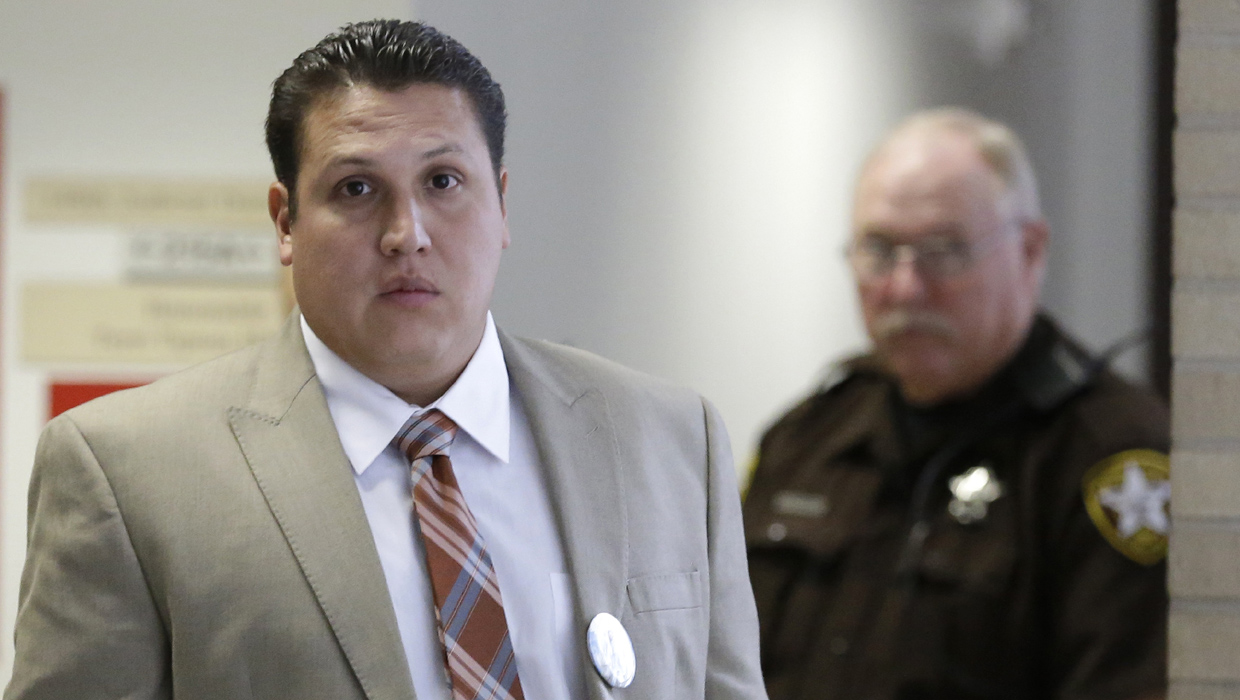 ANGLETON, Texas - An ex-deputy told jurors Wednesday he failed to note in a report that more gunfire had taken place well after a drunken driver was fatally shot in Texas following an accident that killed two boys, a detail a defense attorney says helps point to the innocence of the boys' father who is on trial for murder.

David Barajas, 32, is accused of fatally shooting 20-year-old Jose Banda in December 2012 near Alvin minutes after Banda plowed into a vehicle that Barajas and his two sons had been pushing on a rural road. Twelve-year-old David Jr. and 11-year-old Caleb were killed. Barajas' truck had run out of gas about 100 yards from the family's home.

Barajas' attorney, Sam Cammack, has told jurors his client did not kill Banda and was focused only on saving his sons.

While being questioned by Cammack, Lloyd Anderson, an ex-deputy with the Brazoria County Sheriff's Office, told jurors Wednesday he failed to put in his report the detail about the gunfire he heard after arriving at the crash site. Anderson, who told jurors he was fired from the sheriff's office for not including more details in his reports, said he probably did inform an investigator about the gunfire.

"Do you think that would have been an important thing to put in your report?" Cammack said.

"It probably could have," Anderson said.

Cammack has focused his efforts at Barajas' trial, which began Tuesday, on suggesting to jurors that authorities unfairly zeroed in on a grieving father as the killer without fully investigating other possible suspects. Cammack has suggested the Banda could have been shot by several other people who witnesses reported fleeing the crash site.

Anderson said a search the night of the accident failed to find any individuals who had reportedly fled the scene.

Legal experts say the case will be difficult to prosecute given the lack of hard evidence: no weapon was recovered, no witnesses identified Barajas as the shooter and gunshot residue tests done on Barajas came back negative. If convicted, Barajas faces up to life in prison.

An even greater challenge for prosecutors could be overcoming sympathy for Barajas. Many residents in Alvin, 30 miles southeast of Houston, have supported Barajas. Some have said they might have done the same thing in a similar situation.

Despite no murder weapon, prosecutors have said they have other evidence, including ammunition found at Barajas' home that they say is similar to a bullet fragment found in Banda's car. Cammack says police found a shell casing for a different weapon, a 9mm handgun, at the scene and that Barajas couldn't have had enough time to retrieve a gun from his home and shoot Banda before authorities arrived.

During Anderson's testimony, dash-camera video from his patrol vehicle of the crash site was played for jurors. In the video, Cindy Barajas, the boys' mother, can be heard screaming, "No, not my babies."