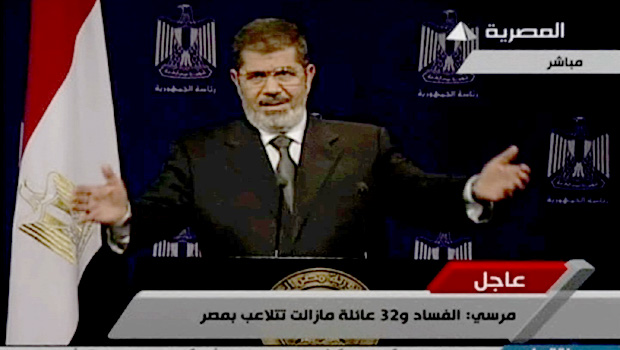 CAIRO Ousted Egyptian President Mohammed Morsi will go on trial on Nov. 4 on charges of inciting the killing of opponents while he was in office, an Egyptian court announced Wednesday.

Morsi was ousted in a popularly backed coup on July 3 and has been held incommunicado at an unknown location and has not been seen since, though he has spoken to his family twice and was visited by EU's foreign policy chief, Catherine Ashton, and an African Union delegation.

Lawyer Mostafa Atteyah said a meeting of Morsi's defense team, planned later Wednesday, was to decide on the course of action and name the head of the team. He said so far the legal team has not seen the case's documents.

"This is like all the other cases. It is a fabricated one," Atteyah said, adding that most cases against Brotherhood members are based on weak prosecution. He said Islamist scholar and former presidential candidate Salim al-Awa is expected to lead the defense team.

The case Morsi was charged in dates back to one of the deadliest bouts of violence during his year in office. At least 100,000 protesters gathered outside the presidential palace on Dec. 4, protesting a decree Morsi issued to protect his decisions from judicial oversight and a highly disputed draft constitution that was hurriedly adopted by the Islamist-dominated parliament.

The next day, Islamist groups and supporters of Morsi attacked protesters who had camped outside the presidential palace, sparking street battles that left at least 10 dead and bring accusation by opponents that Morsi relied on organized mobs to suppress the sit-in.

The prosecution accuses Morsi of inciting his supporters and aides to murder his opponents by forcefully breaking up the sit-in.

Officials from the Brotherhood and its political party denied using violence and said their supporters were defending the palace. They accused opponents of starting the battles and forcing away police that had been guarding the area.

The trial of Egypt's first freely elected president is part of a wide crackdown on the Brotherhood that has eviscerated its leadership and much of its crucial mid-level organizers.

In the last three months, the government has arrested nearly 2,000 people, mainly Morsi supporters, reports CBS News correspondent Margaret Brennan. As a result of those actions and the ongoing political violence on Egypt's streets, the U.S. has suspended hundreds of millions of dollars in aid to an important Middle East ally.

The U.S. has urged the Egyptian government to quickly hold elections and make democratic reforms. Neither have happened, and violence has escalated.

In his U.N. address two weeks ago, President Obama acknowledged the importance of the relationship between the two countries but said that the future of U.S. aid was in question.

"The United States will maintain a constructive relationship with the interim government that promotes core interests like the Camp David Accords and counter-terrorism," Mr. Obama said. "But we have not proceeded with the delivery of certain military systems, and our support will depend upon Egypt's progress in pursuing a democratic path."