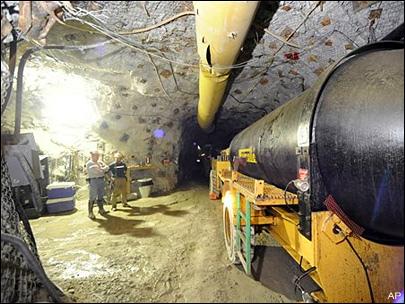 BOISE, Idaho - For nine days, miners more than a mile underground burrowed around the clock to reach one of their own caught in a cave-in — never wavering from calling the effort a rescue mission.

That changed Easter Sunday as officials announced the death of 53-year-old Larry Marek. His body was discovered in a collapsed portion of the Lucky Friday silver mine where he had been working with his brother.

"Words cannot express the deep sorrow we feel at the tragic loss of our friend, colleague and 30-year veteran of the mining industry. Our thoughts and prayers are with his family, loved ones and friends," a Hecla Mining Co. statement said.

Marek, a 12-year company employee, and his brother, Mike, had just finished watering down blasted-out rock and ore April 15 in the northern Idaho mine when the ceiling of a 6,150-foot deep tunnel collapsed. Mike Marek escaped unharmed.

Rescuers worked on the hope that not all of the 75-foot section of tunnel collapsed and the missing miner had perhaps survived in an open space amid the tons of fallen rock and debris.

Efforts to reach that possible area included an attempt to dig through the collapsed tunnel and building a second intersecting tunnel. But dangerous conditions halted the first effort, and work on the second tunnel slowed as crews encountered increasingly difficult obstacles that required a special tunneling technique to prevent the new tunnel from collapsing.

Then drill holes sent forward Saturday to probe conditions at the end of the tunnel — where they hoped to find an open area where Marek was working — found only sand and rubble. Officials said that indicated the entire tunnel collapsed, leaving no space in which the miner might have found refuge.

A company official and a representative of the Federal Mine Safety and Health Administration told the family late Saturday that the rescue mission had changed to a recovery operation.

Sunday morning, the company said it believed Marek was dead. His body was discovered a short while later.

The company said Sunday it was beginning an in-depth investigation to determine how and why the collapse occurred.

Hecla spokeswoman Melanie Hennessey said the last fatality at the mine occurred in 1986.

The mine employs roughly 275 workers, about 50 of whom were underground in various parts of the mine when the collapse occurred.