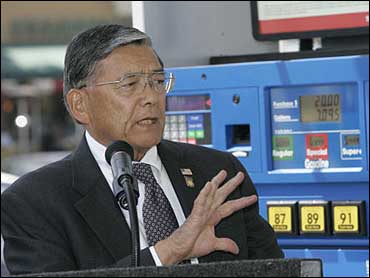 Transportation Secretary Norman Mineta, the only Democrat in President Bush's Cabinet, said Friday that he will step down next month.

In his resignation letter to Mr. Bush, Minetta said, "you have treated me – a Democrat – with great respect and courtesy. ... Over the past five and a half years I would like to think that you and I have demonstrated, even in a small way, that different political affiliations do not have to translate into opposing views on the value of public policy issues or the nobility of public service."

Mineta, 74, was plagued with back problems during his tenure as transportation secretary and spent months working from home and the hospital. But Department of Transportation Press Secretary Robert Johnson said Mineta "felt better than ever," CBS News reports, and that his health was not related to his decision to step down.

Snow, in his daily briefing with reporters, paid tribute to Mineta's long history in public life: his service in the Army, his elections to local positions in California, his 20 years representing California in the U.S. House, and his tours in two Cabinet positions, as Commerce secretary under former President Clinton and now under Mr. Bush.

He offered no other comment about Mineta's departure, which comes weeks after a shake-up in Mr. Bush's top staff and Cabinet had appeared complete.

Mineta had only been expected to stay in the post until major highway funding legislation became law. Congress failed to pass a six-year, $300 billion bill to pay for highway and mass transit programs when the last spending plan expired on Sept. 30, 2003. The previous level of spending was continued until the end of May.