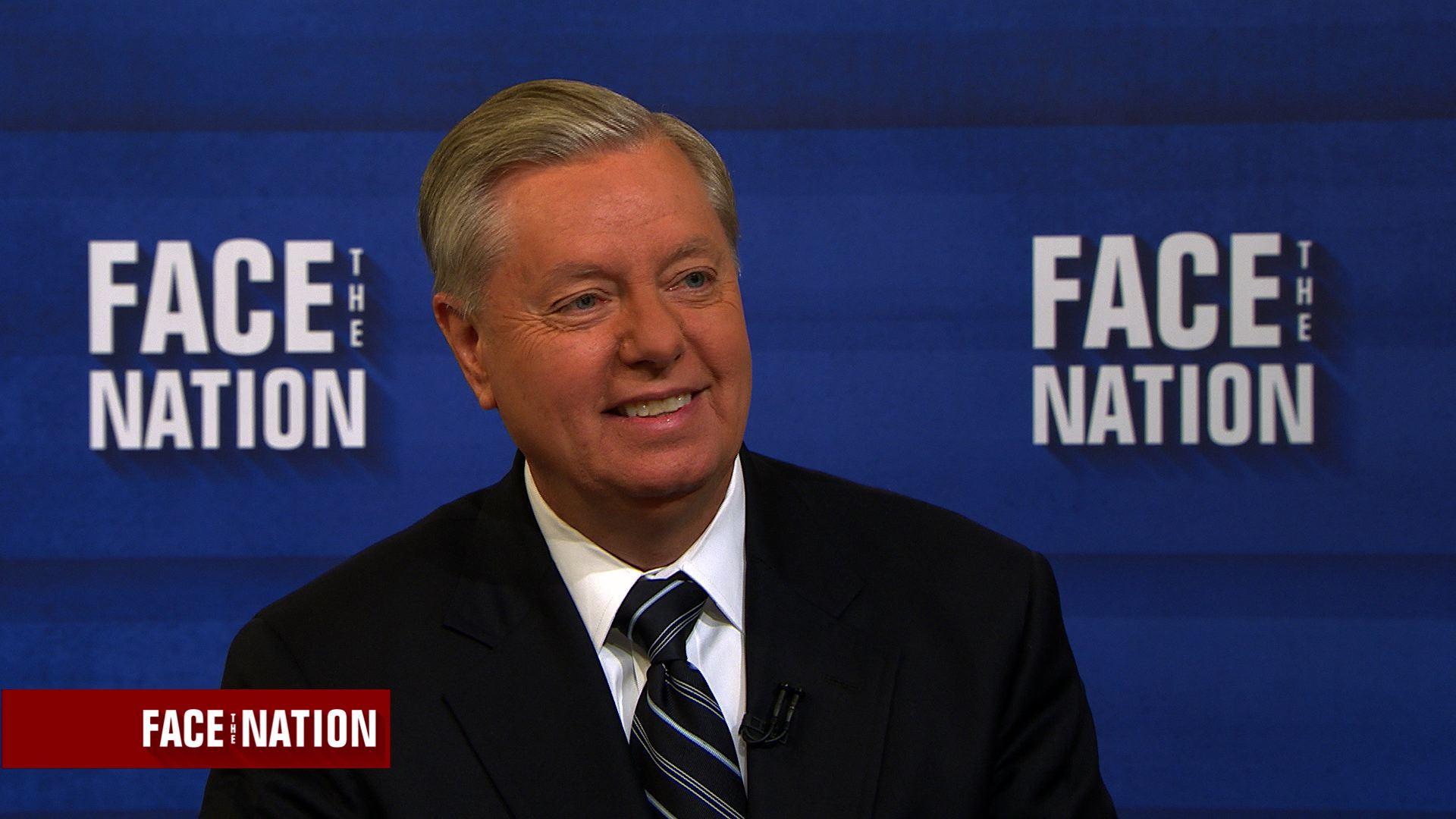 But with multiple investigations into ties between the Trump campaign and Russia hanging over his administration, the statements may be premature.

On Sunday, "Face the Nation" sat down with Sen. Lindsey Graham, R-South Carolina, the top Republican leading the Senate Judiciary Committee's investigation into Russia and the 2016 presidential election. He discussed Comey's testimony and Mr. Trump's remarks about being vindicated.

What follows is a full transcript of the interview, which aired Sunday June 11, 2017 on "Face The Nation."

JOHN DICKERSON: And we start with our first guest this morning, Senator Lindsey Graham. Welcome, Senator.

JOHN DICKERSON: Let me ask you, the president was called a liar by Mr. Comey. The president today has called Mr. Comey a coward. Where are we with this?

LINDSEY GRAHAM: More like a wrestling match than anything else. Here's what I would say. The president got elected by being a fighter, a disruptor. People wanted him to come to Washington and change the place, turn it upside down. I've gotten to know the president better. I like him. He's got a good agenda.

But here's the question. Can you be a street fighter on all things all the time and still be a good president? My advice to the president is every day you're talking about Jim Comey and not the American people and their needs and their desires, their hopes and their dreams, you're making a mistake.

JOHN DICKERSON: Is he getting in the way of his own agenda?

LINDSEY GRAHAM: Yeah, totally. At the end of the day, he's got a good agenda. But this does get in the way of it. So, the hearing was pretty good. No collusion with the Russians yet. I don't think obstruction of justice exists here. But every time you tweet about Comey, it's almost like the wait for the next wrestling match between Comey and Trump. It should be about what can Donald Trump do to help the lives of the American people, and sort of get out of the way here.

LINDSEY GRAHAM: Well, I think it was true that he's not under investigation for colluding with the Russians, and I don't think what was said amounts to obstruction of justice. Now, what the president did was inappropriate. But here's what's so frustrating for Republicans like me.

You may be the first president in history to go down because you can't stop inappropriately talking about an investigation that if you just were quiet, would clear you. It's frustrating for me to want to help a man who I think will do big things no other Republican would do, like immigration.

Believe it or not, I think Donald Trump may deliver us from a broken immigration system. This is not helping. This should be in the judiciary committee. I heard Dianne Feinstein on the show earlier today. You had Comey suggest that the current U.S. attorney general and the former attorney general were playing politics with the investigation.

Lynch and Sessions. That needs to be in our committee. Let me tell you this, to the American people. If the attorney general's office has become a political office, that's bad for us all. So I want to get to the bottom of that, and it should be in judiciary.

JOHN DICKERSON: What do you want to know from Attorney General Sessions?

LINDSEY GRAHAM: Well, I want to know, is it true what Comey said? Did you create an atmosphere there that people believed that you could not fairly render judgment on the president's interactions with Comey? I want to hear from Loretta Lynch, did you say, "Please call it a matter, not an investigation."?

And I want Comey to come to our committee, because I know on two separate occasions, he has told members of the House and the Senate that the main reason he jumped into the election last year and took over the job of attorney general is because he believed there were emails between the Democratic National Committee and the Department of Justice that compromised the Department of Justice, and he thought the Russians were going to release these emails. That's why he jumped in and took over Loretta Lynch's job. I want to know, is that true?

JOHN DICKERSON: Well, now, though, that email, there's been some reporting that that was a fake email, or doctored--

LINDSEY GRAHAM: When he told the House and Senate as late--as early as a month ago, he never mentioned it was fake. I don't know if it's fake or not. But the F.B.I. called me about this, John, and said that they wanted to brief me because I've got some of this wrong.

I saw the Washington Post story. I doubt if it's fake. Maybe it is. But I don't want to be briefed by myself. I want Democrats and Republicans on the judiciary to be briefed together. Our committee has been together and we're going to stay together.

JOHN DICKERSON: So since, we'll stay in the past here a for moment, move into the present. So you would have former attorney general Loretta Lynch come before the judiciary committee--

JOHN DICKERSON:--to answer for these questions about--

LINDSEY GRAHAM: Absolutely. And Sessions, too. And, you know, I think it's inappropriate for the president to testify publicly. But if you're so obsessed about-- and I know you're frustrated. He doesn't believe he did anything wrong with the Russians, and I tend to believe him. He can't collude with his own government. Why do you think he's colluding with the Russians?

So there's a part of this that genuinely frustrates the president. But Mr. President, let's don't make a circus out of your presidency. If you want to come to the judiciary committee and testify under oath, we'll put Comey right by you. It'd be the highest-rated TV show in the history of the world, but it's not good for our democracy.

JOHN DICKERSON: Isn't the challenge to the president not the collusion question, but the interference question? And wouldn't that be the tough questions for him?

There will be a bill passed this coming week to punish Russia for interfering in our elections. They hacked into the DNC. Podesta's emails, it was the Russians. They're providing arms to the Taliban to kill American soldiers. They colluded with Assad so he could keep his chemical weapons.

JOHN DICKERSON: What do you think he'll do?

LINDSEY GRAHAM: I think he'll sign it. And if he doesn't sign it, we're going to override his veto. Mr. President, the Russians did this. They're doing it all over the world. They're providing arms to the Taliban to kill our soldiers. You're the commander in chief. You need to stand up to Russia. We're never going to reset our relationship with Russia until we punish them for trying to destroy democracy. And that starts with more sanctions.

JOHN DICKERSON: The RNC chairwoman, Ronna McDaniel, said that the congressional investigations into this question of collusion should go away. They're a fishing expedition. What's your response to that?

There's zero evidence that President Trump did anything wrong with the Russians. There's overwhelming evidence that Russia is trying to destroy democracy here and abroad. And if you forgive and forget with Putin, you're going to get more of the same and you're going to entice Iran and China to come in 2018 and 2020.

So to any Republican who believes Russia didn't do it, you're wrong. To any Democrat who wants to impeach President Trump because of Russia, you're wrong. All I can say is there's a lynch mob mentality about the Trump administration in the press. They're about as fair as a lynch mob. But these tweets that he does feeds that lynch mob. You're your own worst enemy here, Mr. President. Knock it off.

JOHN DICKERSON: And let me ask you a question here about--about healthcare, which is moving through. I don't want to leave without talking about this.

JOHN DICKERSON: Mitch McConnell has said he wants to get something passed by--by the Fourth of July. On healthcare, you had said, "We're trying to do too much too quick as Republicans. We're running through stop signs." Is by July Fourth running through a stop sign?

10% of the sick people in this country drive 90 percent of the cost for all of us. Let's take those 10 percent of really sick people, put them in a federal managed care system so they'll get better outcomes, and save the private sector market if we can't do this by ourselves. That's a good place to start.

JOHN DICKERSON: All right. We're going to have to end it there. Senator, thank you so much for being with us.