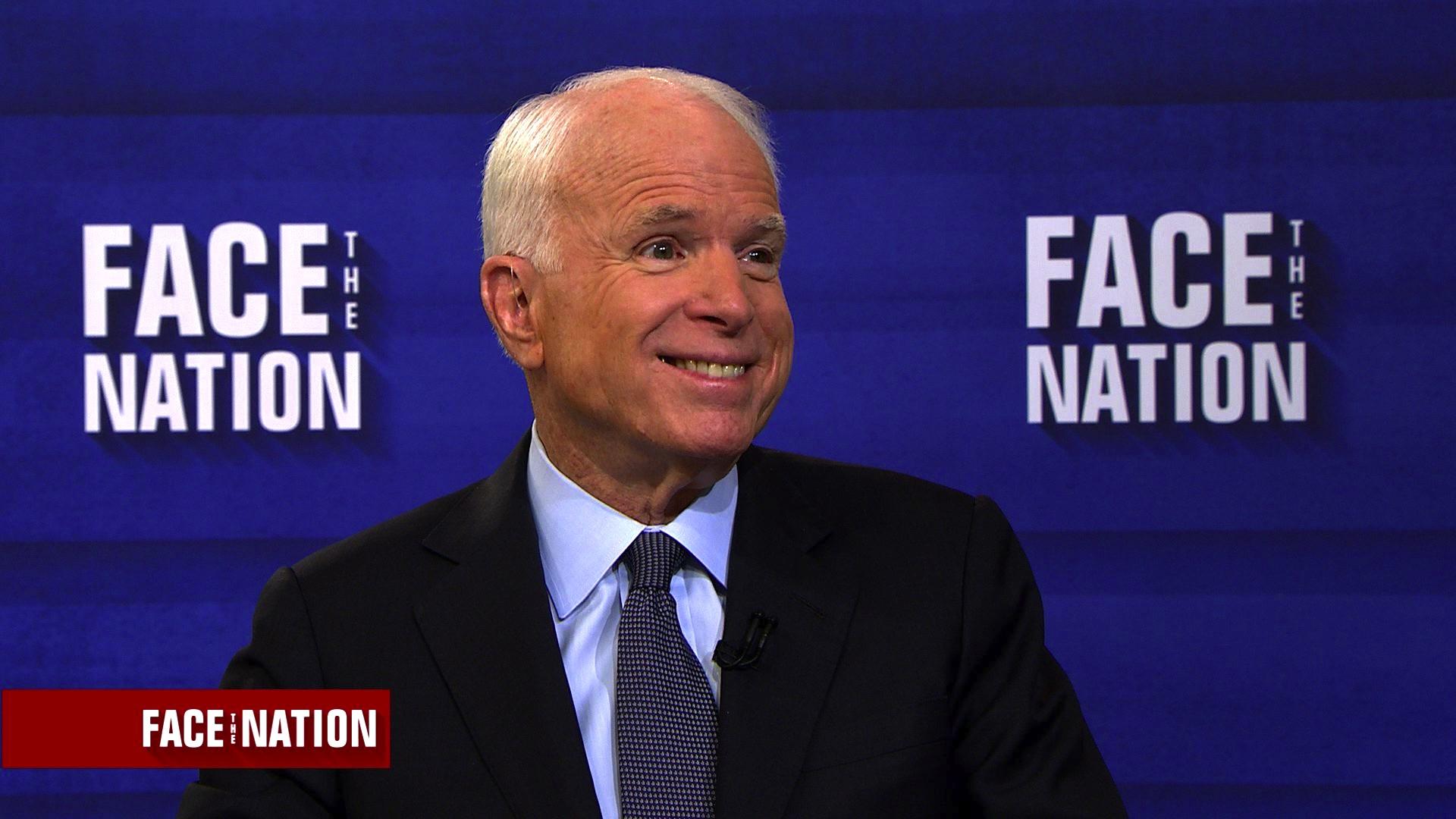 While President Trump was overseas at the G-20 summit in Europe, he engaged with some uneasy U.S. allies and came face to face with Russian President Vladimir Putin for the first time since taking office.

On Sunday, "Face the Nation" sat down with Arizona Republican Sen. John McCain, the chairman of the Armed Services Committee, to discuss the flash points on America's radar -- from Russia to the Middle East.

What follows is a transcript of the interview, which aired July 9, 2017, on "Face the Nation."

JOHN DICKERSON: We turn now to the chairman of the Senate Armed Services Committee, Arizona's John McCain. Senator, I want to jump all over the world here. But let's start--

JOHN MCCAIN: It's a lot of ground to cover.

JOHN DICKERSON: That's right. We don't have a globe, but let's start with Russia. So the U.N. ambassador said in terms of consequences for Russian interference in the election she said, "Don't think this is over." And she suggested consequences could come. But the president this morning is tweeting. And he said the following. "Now it is time to move forward in working constructively with the Russians." That seems to suggest no consequences.

JOHN MCCAIN: Well, so far the interesting aspect of this whole issue is we know that Russia tried to change the outcome of our election last November. And they did not succeed. But there was really sophisticated attempts to do so. So far they have not paid a single price for that. We passed a very good bill through the Senate on sanctions and we also have other proposals out there. But as far as a specific penalty for what they did, there has been no penalty. So if you were Vladimir Putin, who I've gotten to know over the years, you're sitting there and you got away with literally trying to change the outcome not just of our election. French election. Tried to overthrow the government of Montenegro, a beautiful little country. I recommend it. And there has been no penalty whatsoever. Time to move forward. Yes, it's time to move forward. But there has to be a price to pay.

JOHN DICKERSON: Why not? Why does there have to be a price?

JOHN MCCAIN: Otherwise he will be encouraged to do so again. Obviously. I mean, does anyone doubt his intentions of undermining American supremacy, undermining democracy, the principles of freedom, and all of the things that have epitomized Europe and the world since the end of World War II? For the last 70 years we've had a new world order. And that is now under severe stress not only in Europe but all over the world.

JOHN DICKERSON: The president announced and the White House says this is a significant achievement of their meeting. The president, again, tweeting this morning, said, "Putin and I discussed forming an impenetrable cyber security unit so that election hacking and many other negative things will be guarded." What do you--

JOHN MCCAIN: I am sure that Vladimir Putin could be of enormous assistance in that effort since he's doing the hacking. I mean it's, look, I support this president. I did not support him, okay? But he is the president. I've tried to work with him wherever I can. In Armed Services, we passed a defense authorization bill which maybe we'll get to later on that is bipartisan, comprehensive, 27 to nothing through the committee in the normal process. We considered over 200 amendments. So instead, we decide on this path where we're going to ram through a Republican proposal that requires 60 votes for a number of important provisions of it. I don't understand it. What do we need to do now? Go back to the beginning. Introduce a bill.

JOHN MCCAIN: Introduce a bill, move it through, bring it to the floor, vote on it. That's the normal process. And if you shut out the adversary or the opposite party, you're going to end up the same way Obamacare did when they rammed it through with 60 votes. Only guess what? We don't have 60 votes, John.

JOHN DICKERSON: So what happens now on health care? Next week, everybody comes back.

JOHN MCCAIN:  I think my view is it's probably going to be dead, but I am- I've been wrong. I thought I'd be president of the United States. But I think - I think I fear that it's going to fail. And then we should convene a Republican conference, say, "What are we going to do?" Introduce a bill. Say to the Democrats, "Here's a bill." It doesn't mean they don't, that they control it. It means they can have amendments considered. And even when they lose, then they're part of the process. That's what democracy is supposed to be all about.

JOHN MCCAIN: There you go.

JOHN DICKERSON: I want to ask you about Syria. Let's listen to something that Secretary of State Tillersonsaid about the Russians, who have interests in Syria, and the United States. Let's listen to the secretary.

REX TILLERSON: By and large, our objectives are exactly the same. How we get there we each have a view. And maybe they've got the right approach and we've got the wrong approach.

JOHN DICKERSON: Do the Russians have the right approach?

JOHN MCCAIN: You can't make that up. You can't make that up. These are the same people that use precision-guided weapons to strike hospitals in Aleppo where sick and wounded people are. This is just- You know, I'm preparing myself mentally to be on this show. I said, "John, you're not going to get upset. You're not going to get emotional." But I've met the White Hats. I know what the slaughter has been like. I know that the Russians knew that Bashar Assad was going to use chemical weapons. And to say that maybe we've got the wrong approach? Look, I agonized over voting for or against Tillerson for secretary of state. Not that I didn't admire his success and all the great things he's done. But the things that he'd said in the past. He has divorced a fundamental of American democracy. The reason why we are the shining city on the hill, as Ronald Reagan used to say, is because they look up to us because of our principles, and our beliefs, and our advocacy of freedom- for freedom. That's what America's supposed to be all about. Not whether they're right and we're wrong. We know who's--

JOHN DICKERSON: Do you regret--

JOHN MCCAIN:--right and who's wrong here.

JOHN DICKERSON: Do you regret that vote for Tillerson?

JOHN DICKERSON: Finally, you were just recently in Afghanistan. What's your sense of the picture there?

And, you know, we all know what the problem is. It's in the White House. They've got to get their act together, announce a strategy. That has to be done by the president, by the way. And tell the American people, "We've got to win there. Don't forget 9/11. And here is what we need to do to get there." Unfortunately, there is so much disarray within the White House. But I am confident the United States of America, the best and strongest nation on earth, can do it.

JOHN DICKERSON: All right. Senator McCain, thanks so much for being with us.