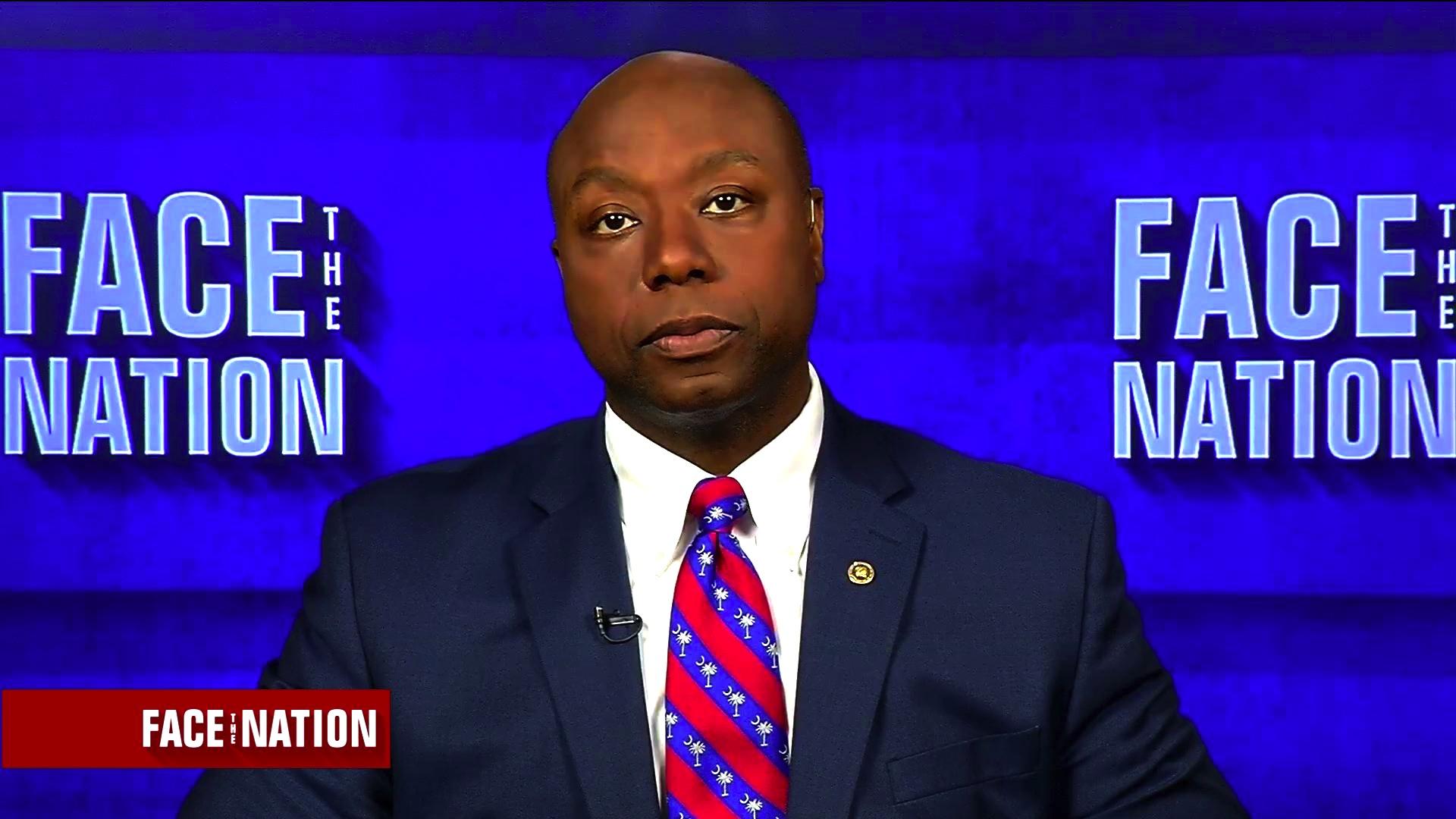 President Donald Trump faced widespread backlash from members of both political parties after a press conference at Trump Tower on Tuesday during which he reverted to his original statement on the deadly violence last weekend in Charlottesville, Virginia. The president blamed "both sides" for the violence.

What follows is a transcript of the interview with Scott, which aired Sunday, August 20, 2017, on "Face the Nation."

JOHN DICKERSON: To talk about the week and address these issues- these larger issues of presidential leadership, we're joined by Republican Senator Tim Scott. He joins us from Mount Pleasant, South Carolina. Welcome, Senator. I want to start with your remarks about the president and the idea that his moral authority is compromised. What does that mean?

SENATOR TIM SCOTT: That means that as we look to the future, it's going to be very difficult for this president to lead if, in fact, that moral authority remains compromised. He went into office. Sometimes you have positional authority, and that is very hopeful. But the reality of it is this nation responds to moral authority when we believe that our president has the entire nation's best interests at heart.

His comments on Tuesday that erased his positive comments on Monday started to compromise that moral authority that we need the president to have for this nation to be the beacon of light to all mankind.

JOHN DICKERSON: What should the president have said?

SENATOR TIM SCOTT: Well, I think what he said on Monday was fantastic. It would have been even better had he said it on Saturday. What he said on Tuesday was just really challenging. What the president should do before he says something is to sit down and become better acquainted- have a personal connection to the painful history of racism and bigotry of this country.

It would be fantastic if he sat down with a group of folks who have endured the pain of the '60s, who have- the humiliation of the '50s and the '60s. This would be an opportunity for him to become better educated and acquainted with the living history of so many folks, from John Lewis to my mother and so many others who have gone through a very painful part of the history of this country, so that when he acts, when he responds, and when he speaks, he's not reading the words that are so positive that he's breathing the very air that brings him to a different conclusion, a conclusion that comes from the wells of his heart.

That's what America wants to see. That's what we're seeing in so many of the counter-protests. We're seeing America rise in a way that it did not in the '60s, which, I think, is powerful and symbolic to the rest of the world that we reject the darkness and we embrace the light. These are good times for those who believe that darkness must be put out and light must shine even brighter.

JOHN DICKERSON: Another thing that the president could have said, and might say, is, to those white supremacists, "I don't want your support." And I raise this because two Republican Senators have suggested, perhaps, a reason he hasn't.

The first is Ben Sasse, who wrote, quote, "There are some whispering in the president's ear that racial division could be good politics for them." Senator Corker, from Tennessee, said, "Helping inspire divisions because it generates support from your political base is not a formula for causing our nation to advance." Do you believe that that's part of what's at play here? And should the president say, "I don't want those votes in any form"?

SENATOR TIM SCOTT: Well, I assume that's automatically the obvious answer, that we do not want the support of those folks who want to divide in order to conquer this nation. The fact of the matter is that the Republican party is the party of Abraham Lincoln and Ronald Reagan. We believe that all men and women are created in the image of God.

We believe that we were all equally created. So the fact of the matter is that we should assume, by default, that we reject the support of those who do not support the theory, the notion, the fact that all men are created equally. So that, to me, seems like the starting point and should not be a leap.

JOHN DICKERSON: Should the president, though, be a little more clear about this, 'cause can the leader of the party of Lincoln, the president, also be the person who's being praise by former imperial wizard of the KKK, David Duke?

SENATOR TIM SCOTT: Yeah, we should bask in the criticism of our enemies. We want those who believe that this country is better with a superior race and thoughts of inferiority pervasive through this nation- that has been rejected. It should be rejected by the president and every single person. I've said several times that, from my house to the White House, we all must reject hatred, racism, and bigotry, and do it in such a clear and unambiguous way that there leaves no doubt, period.

JOHN DICKERSON: You've worked on these issues for a long time. Charleston had, of course, the horrible shooting more than two years ago. What can the president do beyond, sort of fixing the remarks from last week? What more would you expect him to do to reach and deal with some of these larger issues?

SENATOR TIM SCOTT: At this point, it's not what the president says next. It's what he does. We are in a very critical and sensitive time in this nation. We need our president to sit down with folks who have a personal experience. A deep connection to the horror and the pain of this country's provocative racial history. If the president wants to have a better understanding and appreciation for what he should do next, he needs to hear something from folks who have gone through this painful history. Without that personal connection to the painful past, it will be hard for him to regain that moral authority, from my perspective.

JOHN DICKERSON: When you and I talked about this before, you had suggested that this was something the president could do at the start of his administration, spend more times in communities of color. Why do you think he hasn't?

SENATOR TIM SCOTT: Well, it's hard to say why he has not. I can tell you that I stand by those comments back in January that, if, in fact, our president's going to regain that moral authority, if he's going to remain on the high ground, if we're going to make progress in this nation, it's not simply the issues that we fight for, it's understanding the people that we are fighting for, and those issues that best represent a better future for those folks. That's one of the reasons why I have suggested that coming into some of the most challenging economic communities in this nation is in his best interest. It's in the nation's best interests that we fight for the issues that encourage and improves the outcome for those folks that are economically most disadvantaged, and frankly, socially, feel like they're left out.

SENATOR TIM SCOTT: I think that's definitely a local issue. But I am certainly wanting to be clear. One of the most powerful pictures I've ever been a part of, from a racial progress standpoint, was seeing President Obama standing in front of the Pettus Bridge. Not the Selma Bridge, but the Pettus Bridge. Someone who stood for hatred, bigotry, and oppression. Having an African-American president stand in front of that bridge said so much about the darkness of the human soul in the past and how much progress that has been made in this country. Here at home in South Carolina, John C. Calhoun was a United States senator and famously a part of the notion of oppression and bigotry in this country. For the--

SENATOR TIM SCOTT: --voters of South Carolina to evolve to the place where they elect someone like myself to be in the same seat of John C. Calhoun says what is possible in America and it started in South Carolina. I think we are on the right path overall.

JOHN DICKERSON: All right. Senator Scott, we're going to have to leave it there. We're out of time. We're so grateful for you being with us.