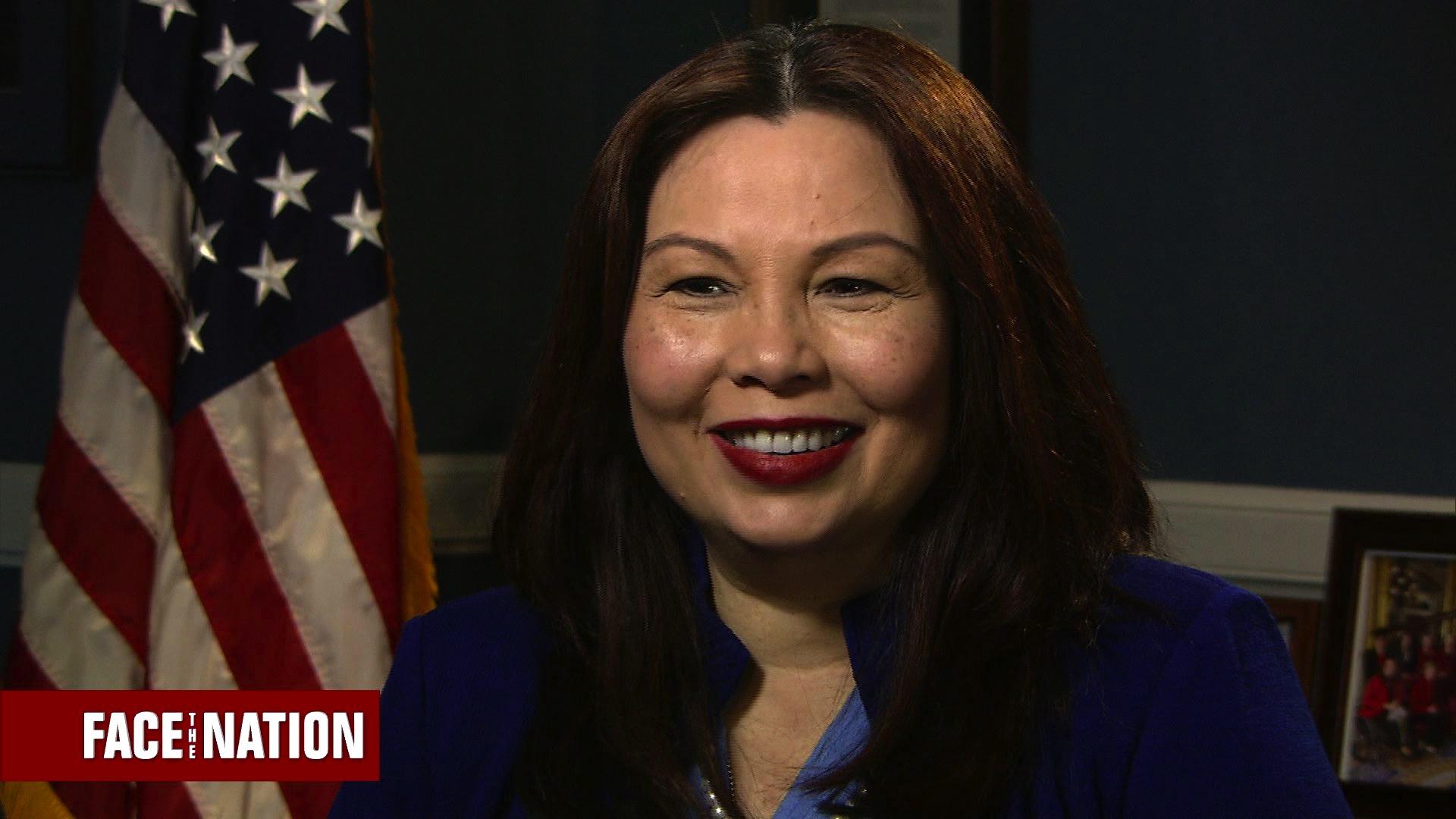 Democratic Sen. Tammy Duckworth of Illinois announced some heartwarming news this week: she's pregnant with her second child, a girl who is due to arrive in April. Duckworth will become the first senator in history to give birth while in office.

Duckworth joined us to discuss her career, her pregnancy and arcane Senate rules about children in the chamber.

The following is a transcript of the interview with Duckworth that aired Sunday, Jan. 28, 2018, on "Face the Nation."

NANCY CORDES: Senator Tammy Duckworth is an Iraq War veteran, a double amputee, and soon she'll be the first senator to give birth while in office.

The Illinois Democrat announced this week that she is expecting a second baby girl in April, a few weeks after her 50th birthday.

She wants other women struggling with infertility to know what she went through: 10 years of trying to conceive her first child, and a miscarriage this time, while campaigning for the Senate.

NANCY CORDES:  What did you doctor say to you about your chances of getting pregnant at 49?

SENATOR TAMMY DUCKWORTH: Well he said it's the new 40. He said 50 -- a 50-year-old mom is the new 40. I have the most wonderful fertility doctor and he helped me with Abigail and he said if you're willing to go through the process with me step-by-step, it will seem like it takes a long time, but we want to do this right. And he was right, I just had to be patient and go through that. It's kind of like being a mom, you have no control.

NANCY CORDES: I remember that feeling when I had one I felt like a supermom and then once you have the second one, all those illusions are shattered.

SENATOR TAMMY DUCKWORTH: Well, we'll see, yeah, I didn't feel like a supermom during the first baby. I decided to run for the United States Senate when I was on maternity leave, which was a leap of faith to do that. So I was a congresswoman, I was trying to breastfeed, travel, campaign, do my job as a United States congresswoman, and it was really, really tough.  There were a lot of tears, and a lot of "why am I doing this?", and I just wanted to be home with my daughter but then I would come across a situation that needed to be fixed like legislation that I could pass and I realized, "No, I have to do this, this makes me a better legislator."

NANCY CORDES: One of the things you noticed when you were doing all that traveling was that a lot of airports didn't have anywhere for you to nurse.

SENATOR TAMMY DUCKWORTH:  No. And I would go into airports and well, it's the handicapped stall in the public toilet, and I was like, "That's disgusting. You wouldn't eat a sandwich there, why would you think I should nurse my baby there or pump breast milk there?"  That's wrong. It was humiliating, and -- so I tried to pass some legislation on it and it's out of committee, mandatory nursing rooms for moms, at airports and hopefully we'll get an FAA bill and it will become law.

NANCY CORDES: Did you dream of going into politics before all of this happened?

VOICEOVER, NANCY CORDES: (Duckworth was a helicopter pilot in the National Guard.  Her call sign: Mad Dog.  Shortly after she deployed to Iraq in 2004, her Black Hawk was hit by a rocket-propelled grenade. As she was recovering, she got a surprise invitation -- thirteen years ago this week.)

SENATOR TAMMY DUCKWORTH: It was Senator Durbin who found me in the hospital. He invited all Illinois servicemen and women at Walter Reed all wounded warriors to go to the State of the Union and I was one of two who was well enough to go it was my first trip out of the hospital just -- it was very emotional to go into that gallery and look down and see this democracy that I had just sacrificed for. It was overwhelming I mean it still gets to me that feeling.  And I was missionless. I was missionless. I was a helicopter pilot with no legs and I was trying to find a way to serve my country. And we were having issues at Walter Reed.

I just became an advocate for my buddies because I happened to be the highest ranking amputee patient. And so I met Senator Durbin that night and he made the mistake of giving me his personal phone number. And I just started calling him, I didn't know any better. And after about ten months of this he called me up and said, "You need to run for Congress." And that's how I got into this. It's crazy.

NANCY CORDES:  And now you're standing on the floor of the Senate.

NANCY CORDES:  And taking on the president on military issues.

VIDEO, SENATOR TAMMY DUCKWORTH ON SENATE FLOOR: (I have a message for Cadet Bone Spurs: If you cared about our military, you'd stop baiting Kim Jong-un into a war that could put 85,000 American troops -- and millions of innocent civilians -- in danger.)

NANCY CORDES: You called him a "five deferment draft dodger."

SENATOR TAMMY DUCKWORTH: Four for school and one for medical reasons that he can't even remember what foot the bone spur was in. I can still feel the hangnail in my right foot, and it's missing!  And-- and you know, we have a guy that says he had a bone spur that kept him out of Vietnam and he can't remember where it was.

NANCY CORDES: Do you think that disqualifies him from being commander-in-chief or making decisions about the military?

SENATOR TAMMY DUCKWORTH: No, I think he was elected rightfully to be president of the United States. But I don't think that he has the right to question other people's support for our military, especially those of us who have served.

VOICEOVER, NANCY CORDES: (Duckworth is the first disabled woman in the Senate and the first member of Congress of Thai descent.)

NANCY CORDES:  How does that feel?

SENATOR TAMMY DUCKWORTH: Unintentional. Well the whole being the first sitting Senator to give birth I think is ridiculous. It's 2018, we need more female senators, there are only 22 of us. But I've been a little overwhelmed by how landmark it is when it shouldn't be -- it's the 21st century.

VOICEOVER, NANCY CORDES: (But even someone used to breaking barriers runs into obstacles now and then.)

SENATOR TAMMY DUCKWORTH: I was the tenth one in the House, so there was a policy in the House, but I'm the first in the Senate. So I have to figure that out.

VOICEOVER, NANCY CORDES: (She recently discovered that children are still prohibited on the Senate floor. Which complicates her plans for maternity leave.)

SENATOR TAMMY DUCKWORTH:  I'm going to take the time that I need with my daughter, but in the middle of that, there might be days when I have to, you know, we have a lot of close votes right now, that I need to come in and -- and not let the people of Illinois down.

SENATOR TAMMY DUCKWORTH:  But then what do I do with my baby? (LAUGHTER)

NANCY CORDES: So the Senate is behind the times, is what you're saying.

SENATOR TAMMY DUCKWORTH: The Senate is behind the times. So we're going to work on that. (LAUGHTER)

NANCY CORDES: And we'll be back in a moment.