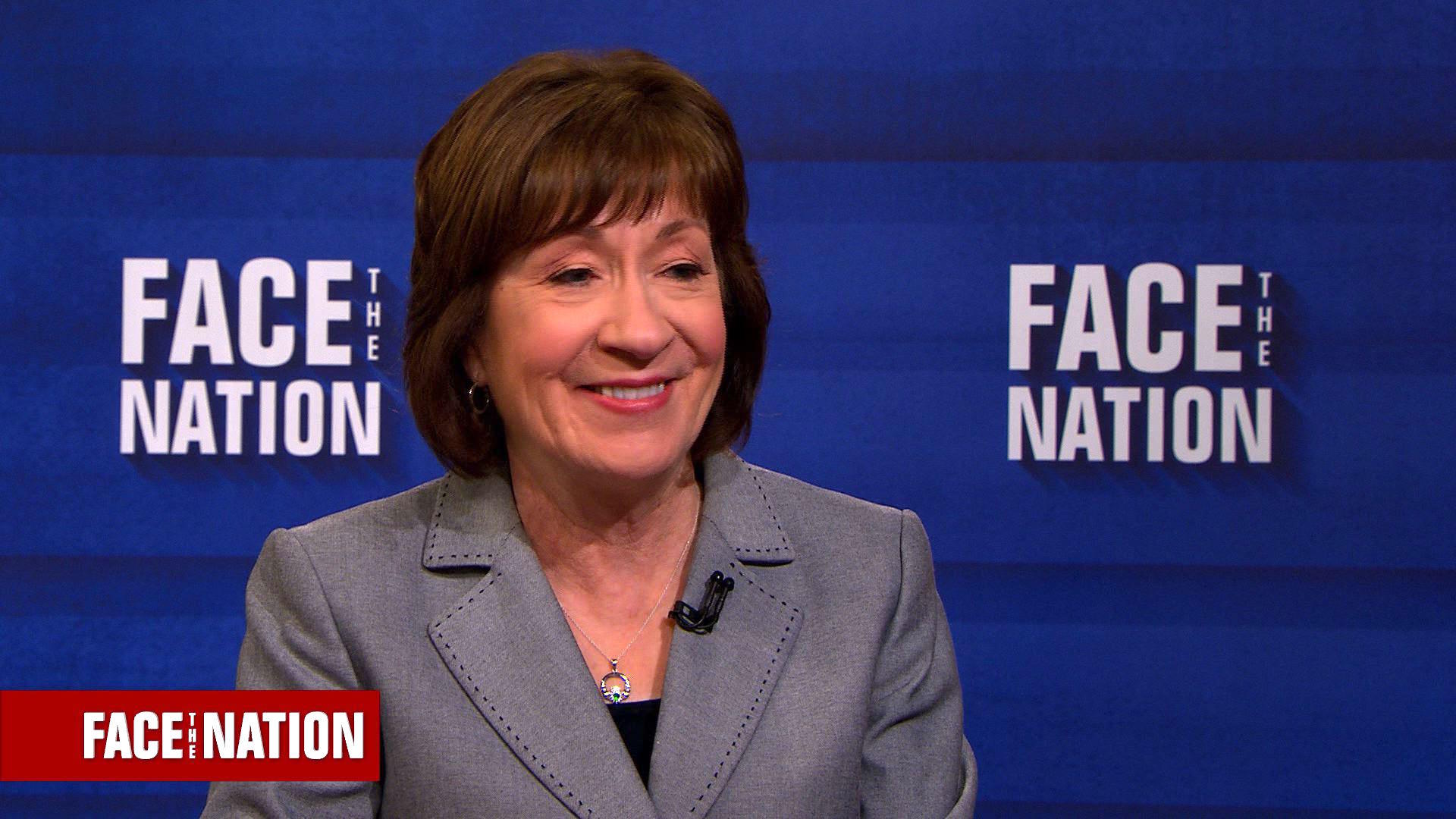 The White House is set to unveil its legislative framework for an immigration bill on Monday, the day before President Trump's first State of the Union address. The administration will call for a pathway to citizenship for 1.8 million "Dreamers" in exchange for increased spending on border security and cuts to legal immigration.

Republican Sen. Susan Collins from Maine was one of the senators who helped bring the government shutdown to an end with a promise to tackle immigration in the Senate. She joined us to discuss the president's immigration proposal and her work on a bipartisan immigration bill.

The following is a transcript of the interview with Collins that aired Sunday, Jan. 28, 2018, on "Face the Nation."

NANCY CORDES: Good morning and welcome to Face the Nation. I'm Nancy Cordes. We've got a lot of ground to cover today and we begin with the Republican Senator from Maine, Susan Collins. She led a bipartisan effort to reopen the government last Monday and her group of about 25 senators is now working to influence negotiations over a bill to protect children of undocumented immigrants and increase border security. Senator, welcome.

NANCY CORDES: I want to talk to you all about immigration, but first I want to get your reaction to the latest news that was first reported in The New York Times that despite months of White House denials, the president actually did express a serious interest at one point in firing special counsel Robert Mueller.

SENATOR SUSAN COLLINS: I think it's important to understand that the president cannot directly fire Mr. Mueller. The only person who has that authority is the deputy attorney general, Rod Rosenstein, and he's the one who appointed Mr. Mueller in the first place. I asked him about that at a hearing last year, and he was adamant that he would resist any White House pressure to fire Mr. Mueller.

NANCY CORDES: But doesn't it sound like the president was at least trying to obstruct justice?

NANCY CORDES: So, there's a big difference between wanting to fire someone and actually going through with it. You have not weighed in yet on these two bipartisan bills that would essentially protect Robert Mueller from an undue firing. Does this latest news change your calculus?

SENATOR SUSAN COLLINS: First of all, I commend the two groups of senators, Senator Tillis and Senator Coons, plus Senator Lindsey Graham and Senator Booker, for working on bipartisan legislation to have a strength and safeguard in the law to protect the special counsel from a firing. And that was what used to be in the law many years ago when we had an independent counsel law. It expired in the late '90s. I was one of the few senators who wanted to extend it at that time. So, I'm totally open to adding that safeguard.

NANCY CORDES: You are on the Senate Intelligence Committee, where a lot of these interviews have taken place so far behind closed doors. Would you support open hearings with big players like Jared Kushner or Donald Trump Jr., so the American public could hear what they have to say?

SENATOR SUSAN COLLINS: I think more open hearings is a good idea. We've had 12 already, and they've been very interesting hearings, but my interest is making sure that we don't compromise in any way the special counsel's investigation. So, we have to be careful to coordinate testimony to make sure that we're not interfering in that way.

NANCY CORDES: Now to immigration. After weeks of confusion over the president's position on the so-called Dreamers, the White House has now issued a list of what it wants to see in a bill that would provide legal status to that population. And here's the highlights.

NANCY CORDES: A path to citizenship for up to 1.8 million young people, 25 billion dollars to pay for a border wall and additional security, an end to family-based migration for all but spouses or children under 18, and an end to the diversity visa lottery. These are some major changes to the immigration system in exchange for protecting this narrow slice of the immigrant population.

SENATOR SUSAN COLLINS: It's helpful to know what the four pillars are that the administration is looking for. Congress has got to work its will, and ultimately we'll see what the president is willing to sign. It seems to me that the two important things to tackle right now and that our group will be making some recommendations to those who have legislative authority in this issue on is to protect the Dreamers and also to strengthen border security. The other two issues are very important issues. They're very complicated issues as well.

NANCY CORDES: Why do you think the White House suddenly came out embracing a pathway to citizenship?

SENATOR SUSAN COLLINS: I talked directly to the president about this issue, and I found that he was very sympathetic to a case that I told him about of someone in Maine who came to this country at age four, didn't even know that he was not a citizen until he went to apply for a driver's license and then his parents told him.

SENATOR SUSAN COLLINS: And it's pretty compelling when you know that the average Dreamer was brought to this country through no fault of his or her own at age six. And to say that those young people should be shipped back to a country that they have no memory of, that they don't know, is really a pretty difficult position to take.

NANCY CORDES: But do you trust the president to stick with this position? He's already getting a lot of blow back from conservatives who call it amnesty.

SENATOR SUSAN COLLINS: I give the president credit for putting  in writing and saying that this is what he wants to see happen despite the criticism. Look, there's going to be criticisms from both sides on whatever we come up with.

NANCY CORDES: So, you've now got 25 Senate moderates all squeezing into your office periodically. And they're hoping to influence this immigration negotiation that's primarily going on now between the number twos, or the whips, in the House and Senate, this group of four. But it seems like those four leaders are going to be much more focused on what House Republicans can live with than what Senate moderates can live with.

SENATOR SUSAN COLLINS: Well, we hope to have an influence on the process, but we don't control the pen. And Senator Durbin and Senator Cornyn are the leads in the Senate, but they've been very open to input. And I think ideas will be funneled to them, and we'll see what they come up with. But if they agree, I have a feeling that that will be a bill that can go all the way to the president's desk, and that's our goal.

SENATOR SUSAN COLLINS: I am.

NANCY CORDES: Senator Susan Collins of Maine, thanks so much for being with us.