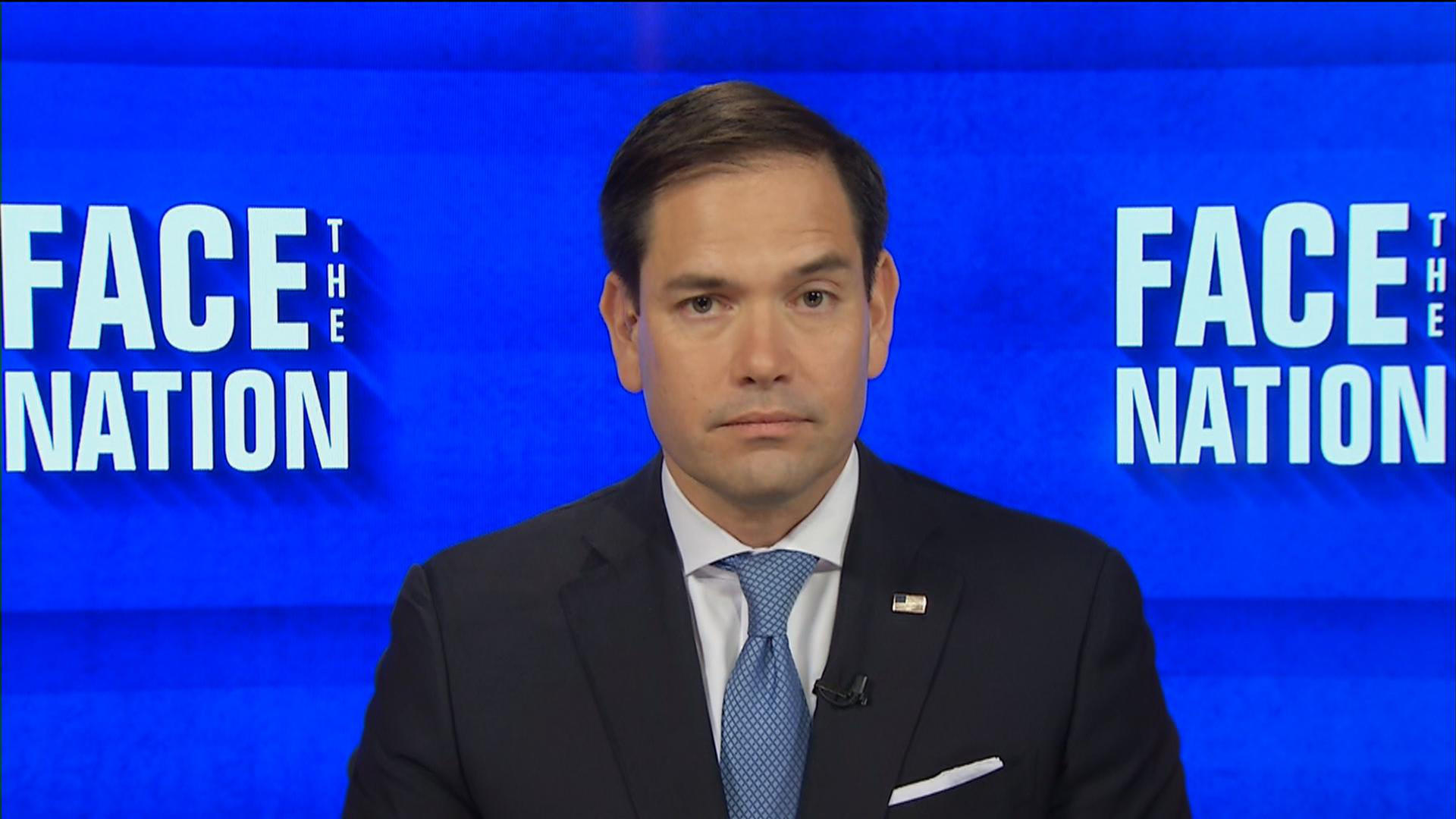 The probe into possible collusion between Russia and the Trump campaign took a dramatic turn when the Justice Department appointed former FBI Director Robert Mueller to lead an independent investigation.

The development followed President Trump's decision earlier this month to fire FBI Director James Comey, as well as subsequent reports about a memo Comey wrote that suggested the president asked him to drop an investigation into former National Security Adviser Michael Flynn.

What follows is a full transcript of the interview, which aired Sunday May 21, 2017 on "Face The Nation."

JOHN DICKERSON: We turn to Republican Senator Marco Rubio, who joins us from Miami, Florida. Welcome, senator. I want to--

JOHN DICKERSON: --start with former Director James Comey. He will testify in front of the Intelligence Committee, which you are on. What do you want to know from Director Comey?

MARCO RUBIO: Well, obviously, look, these media reports that are out there raise questions and deserve answers. What did the president say?

JOHN DICKERSON: What did you make of the New York Times report which apparently came just from the notes taken by White House note takers in the meeting between the president and the Russians in which the president said, "I just fired the head of the F.B.I. He was crazy, a real nut job. I faced great pressure because or Russia. That's taken off"?

MARCO RUBIO: Well, I haven't seen the notes. I told people earlier this week I had a conversation with the White House. People that were in that meeting, they denied that anything had been said in that meeting that could compromise sources, methods, or information with regards to intelligence.

And that's why it's important that the Intelligence Committee and those conducting this inquiry look at them.

JOHN DICKERSON: That's right. And there were two elements of that meeting with the Russians. One, possible classified information that was handed over. The other, this question about what may have been said about James Comey. Is one thing you're interested in at least with respect to Comey though whether there was an attempt to interfere with the investigation by the president?

I think virtually everyone has full confidence that he's going to conduct a thorough and fair investigation and a look at all of these things and give answers. And we're now going to look at it and continue to look at it from a counter-intelligence perspective. And that's our job.

JOHN DICKERSON: I wanted to get your response to something the White House said about Director Comey that bears on foreign policy. Now, Sean Spicer, the press secretary, said that by grandstanding and politicizing the investigation into Russian actions James Comey created unnecessary pressure on our ability to engage and negotiate with Russia. Do you think that's right?

MARCO RUBIO: Well, that may be the White House's opinion. I don't necessarily share that 100%, assuming that that's in fact what Director Comey was doing. I don't think that that does. Because at the end of the day, the United States of America remains a major factor, if not the major factor, on the global stage.

And American foreign policy resides not solely in the hands of the White House but also the Congress. As you know, there is plenty of votes in Congress for additional sanctions. So I don't necessarily believe that it undermined our ability to deal with the Russians. That's my view of it. Obviously the White House has a different take.

MARCO RUBIO: But I don't think that.

JOHN DICKERSON: Isn't it, senator, also the fact that the Russians by trying to meddle in the election undermined the U.S. ability to negotiate with the Russians?

MARCO RUBIO: Well, certainly, I mean, it's a factor in our relationship. There is no doubt. And that should be the core focus of the Intel Committee's work, is to lay out to the American people not just what Russia did. I think we have a pretty good view of that already. But how they did it, and what it means for the future, and what we should be doing about it.

JOHN DICKERSON: Let me ask you about this report that classified information was given. The president said he was giving information to the Russians in that meeting in order to help them, quote, "Greatly step up their fight against ISIS and terrorism." Do you think that's a possibility? That by giving them information that the Russians will step up and help with ISIS?

MARCO RUBIO: Well, two things. First of all, I don't know what the Russians knew already, number one. Or at least I won't discuss that. Number two, I'm not sure that's what the president did, that he gave them that sort of information. Everybody that was in the room that I've spoken to denies that that's what happened.

But obviously that'll be a focus of the inquiries as we move forward. And, number three, I think the Russians, if they cooperate against terrorism, it will be to the extent that it's in their interest vis-à-vis their view of the United States. Who they define as terrorists is not simply ISIS.

They also define as terrorists virtually any group on the ground that is confronting Assad. We're focused on radical jihadists. They're focused not just on that but anybody who is trying to get rid of Assad.

JOHN DICKERSON: Senator McConnell, a Republican leader in the Senate, said that he'd like a little less drama out of the White House. Do you share that view?

MARCO RUBIO: Well, look. I mean, I don't understand why people are that shocked. This president ran a very unconventional campaign. I was there for a big part of it at the beginning alongside being one of his competitors. And that's what the American people voted for. And in essence, you know, this White House is not much different from the campaign.

I mean, people got what they voted for. They elected him. Obviously it's in the best interest of this country to try to help him succeed. As far as the drama's concerned, yeah, I mean, it's unique. It's different from anything we've ever confronted. I think our job remains to do our work.

We'll have to deal with these issues. These issues come up, these questions every single day. And I do think the White House would benefit from some systems in place that perhaps avoid some of the unnecessary friction points that come up on a daily basis. But this is also the political environment we now live in, too. I mean, politics are covered this way.

And politicians also behave in this way because they know they can get attention for saying things one way or the other. It's just the way politics has moved. I don't think it's good for the country. But that's where we're headed for now apparently.

MARCO RUBIO: Well, it's not an approach that I entirely agree with. I certainly believe that we need to confront Venezuela, and Cuba, and Iran, and all the human rights violators in the world. And the White House is willing to do so publicly for nations that are hostile towards the United States. They believe- And it's a point of disagreement.

But they believe that on the countries that are cooperative with us on other issues, like Saudi Arabia, like Egypt, we should privately confront them on the issues of human rights, that you'll get a better result that way. Now, I have a different take on it. I believe human rights are important for us to speak about publicly.

The human rights activists in those countries would agree because they're demoralized when they don't hear it. But in fairness, the White House has gotten results. I remember raising the issue of Aya Hijazi repeatedly with the White House. They raised it in private with Egypt. She was released.

Sandy Phan-Gillis was being held unjustly ion China. I raised it with the White House. They raised it privately with the Chinese. She was released. So I do want to acknowledge they have gotten results through their approach. But I think from a broader perspective I disagree with it.

I've told them that. They know it's a point of disagreement with me. Because I believe that these countries, Egypt, Saudi Arabia, and the like, are not sustainable in the long term if they continue to systemically violate the rights of their people.

JOHN DICKERSON: Okay. Senator Marco Rubio, thanks so much for being with us.

MARCO RUBIO: Thank you. Thanks.