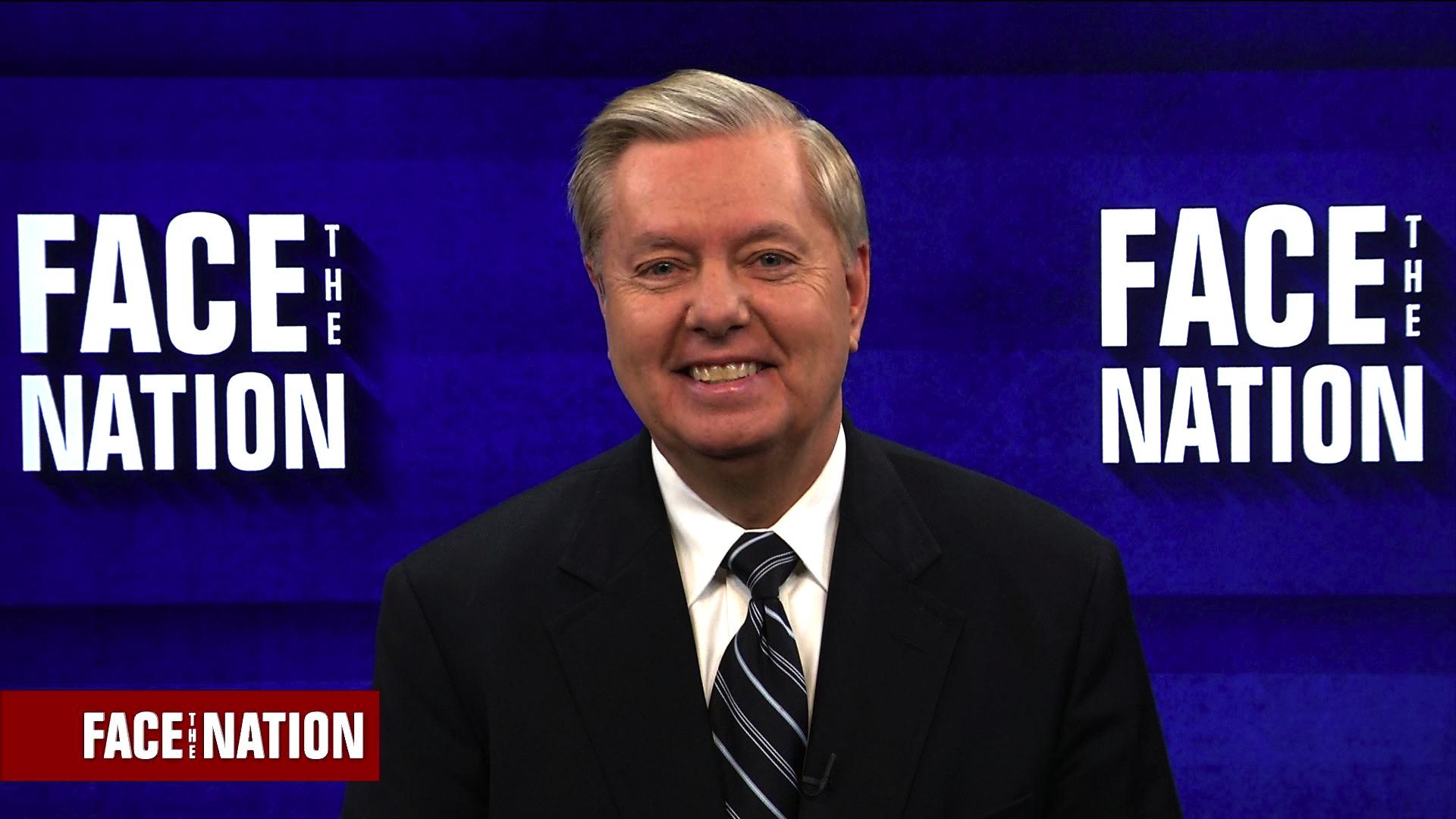 In one of the most tumultuous weeks in Washington in recent memory, President Trump bucked many in his own party on gun control, saw the departure of one of his closest aides and announced new tariffs on steel and aluminum that roiled global markets.

Sen. Lindsey Graham, R-South Carolina, joined us to talk about the prospects of new gun legislation, whether he has confidence in Mr. Trump's staff and the economic effects of the new tariffs.

The following is a transcript of the interview with Graham that aired Sunday, March 4, 2018, on "Face the Nation."

MARGARET BRENNAN: At an off camera press dinner last night, the president made light of the chaos joking that it had been another calm week at the White House and it's finally running like a fine-tuned machine. And with that, we begin this morning with South Carolina Republican Senator Lindsey Graham. He joins us from Clemson, South Carolina.

SEN. LINDSEY GRAHAM: You got to be kidding me.

MARGARET BRENNAN: Senator, where- where do we begin?

MARGARET BRENNAN: Do you have a message to the president after this week?

SEN. LINDSEY GRAHAM: Yes. As to guns, you have an obligation to give us a package to consider regarding school safety and guns. You did a good job talking in front of the country about the problem. Let's come up with solutions that are bipartisan, propose something Mr. President and I think Republicans have an obligation to work with Democrats to make it law if we can. So that's guns. On trade, you correctly identified the problem of China dumping steel throughout the world destroy the American steel industry. Your solution is let China off the hook. It's only going to hurt American consumers and our allies. Please reconsider your solution.

MARGARET BRENNAN: Well, sir, on the issue of personnel confusion and some policy confusion that you referred to there--

SEN. LINDSEY GRAHAM: Can't help you on the personnel front.

MARGARET BRENNAN: Well, do you still have faith in Chief of Staff John Kelly? And now there are rumors once again about the fate of the National Security Adviser H.R. McMaster. Are you confident in him?

SEN. LINDSEY GRAHAM: I'm very confident in H.R. McMaster I think he's learned as much about the war on terror from fighting  it than anybody that I know. I think he's really smart on North Korea and Iran. I hope the president will keep him around. But it's up to the president. He can fire anybody he likes but I have a lot of confidence in General McMaster and John Kelly to me has created an order out of chaos initially, is kind of backsliding now. But I think John Kelly is the right guy to continue to help the president organize his agenda. Have a lot of faith and trust in John Kelly, hope he stays.

SEN. LINDSEY GRAHAM: The last thing on my mind right now is the peace process. We're about to have a war between Israel and Hezbollah in southern Lebanon. Iran is winning and we are losing. So I went to Israel and Jordan. The king of Jordan is under siege because we have no policy as the United States regarding the Russian Iranian axis, southern Lebanon is a rocket launching site against Israel. They're developing precision guided weapons so I would focus on containing Iran rather than pushing a peace process that's broken. If we don't come up with a strategy against Iran we're going to make Israel go to war here pretty soon with the Hezbollah elements in southern Lebanon.

MARGARET BRENNAN: Well you're referring there though to the outgrowth of the war in Syria. The president was very clear we are there just to get rid of ISIS and get out. Does he need to reconsider that policy? How do you fix the problem you identified?

SEN. LINDSEY GRAHAM: Well, he said he did not want to turn Iran - Syria over to Iran. We don't have a strategy to contain Iran. They're about to take over Damascus. He's done a good job fighting ISIL. But Iran is now dominating the Mideast. Hezbollah elements being supplied by Iran have over 100000 missiles pointed at Israel. The king of Jordan has suffered mildly from the Syrian civil war if we don't push Iran out and come up with an agreement in Geneva that gives Syria back to the Syrians. This war never ends. So Mr. President it's just not about defeating ISIL. If you leave Syria in the hands of Russia and the Iranians this war never ends. And our friends in Israel and the world are hurt.

MARGARET BRENNAN:Do you know where the president's red line is on chemical weapons which the Assad regime continues to use?

SEN. LINDSEY GRAHAM: I thought it did. But I don't any longer. Clearly he did use chemical weapons yet again. What I would like to see is a no fly zone inside of Syria where people could go back to Syria from the surrounding neighborhood, and we would train Syrian Democratic Forces to take Assad on. And tell the Russians and the Iranians if you bomb these people you do so at your own peril and try to level out the chaos in Syria go to Geneva to get a peace agreement. You'll never get an agreement in Geneva as long as Assad's winning on the battlefield. Our policy in Syria is a complete mess. We're AWOL when it comes to containing Russia and Iran and Syria as a real threat to the region.

MARGARET BRENNAN: I want to get back to what you referred to there in regard to the president's surprise announcement on trade tariffs on steel and aluminum. You know BMW has its largest plant in the world in your home state and now the president is talking about putting taxes on European cars. What are you going to tell the president to do about this? Are you calling for a full reversal?

SEN. LINDSEY GRAHAM: Bad idea, you need...Here's what I would tell the president. The reason our steel industry has been decimated is because of China dumping. China produces more steel than the world consumes for several years in a row. China is your problem, Mr. President. Taxing European car imports hurts BMW because do the same thing does. BMW makes more cars in Greenville, South Carolina than any plant in the entire BMW family. Volkswagens come to South Carolina. We've got a steel plant in South Carolina. We got we make more tires than any place in the United States. 32 percent of the tires exported from the United States comes from South Carolina. This tariff on steel is going to hurt them. So go after China.

MARGARET BRENNAN: So you want -- you want your president to revise this to be more targeted specifically at Beijing and perhaps expand with certain countries.

SEN. LINDSEY GRAHAM: You're letting China off the hook. China wins when we fight with Europe China wins when the American consumer has higher prices because of tariffs that don't affect Chinese behavior. If you want to affect China get back in the Trans-Pacific Partnership, be present in Asia, hit them on intellectual property theft, hit them on currency manipulation, hit them about steel dumping. China is winning and we're losing with this tariff regime. You are letting China off the hook. You're punishing the American consumer and our allies. You're making a huge mistake here. Go after China, not the rest of the world.

MARGARET BRENNAN: On the issue of gun policy, you seem to think there was something possible to get done. I understand you're introducing a bill this week regarding so-called red flag policy that would allow authorities to seize guns before people commit violence. What kind of prospects do you see for this?

SEN. LINDSEY GRAHAM: Really good prospects. The president did a good job talking about we should be able to do something to stop shootings like this. We tell our citizens if you see something say something. Well, everybody saw something and everybody said something but the government did nothing. So under this bill you could go to a federal judge law enforcement people could family members could petition for a restraining order. You got to make the case, give due process. This person's about to blow up here. They're becoming mentally unstable. Create a system that would intervene. This guy was visited by the cops 30 times. People called the FBI, nobody did a damn thing. So this bill would allow judges to take guns away from a guy like this before it's too late. I hope the president will get behind this, because it worked in Indiana and elsewhere we modeling our law to Indiana.

MARGARET BRENNAN: Very quickly sir do you have any idea if Republican leadership will take this to the floor. And it's a controversial issue an election year.

SEN. LINDSEY GRAHAM: If we don't we're going to get hurt, because most Americans believe we should solve problems that Americans are facing like gun violence and school safety problems. If we don't take this up and if Democrats don't work with us we'll all suffer. And we should.

MARGARET BRENNAN: Senator Lindsey Graham, thank you for joining us this morning from South Carolina.