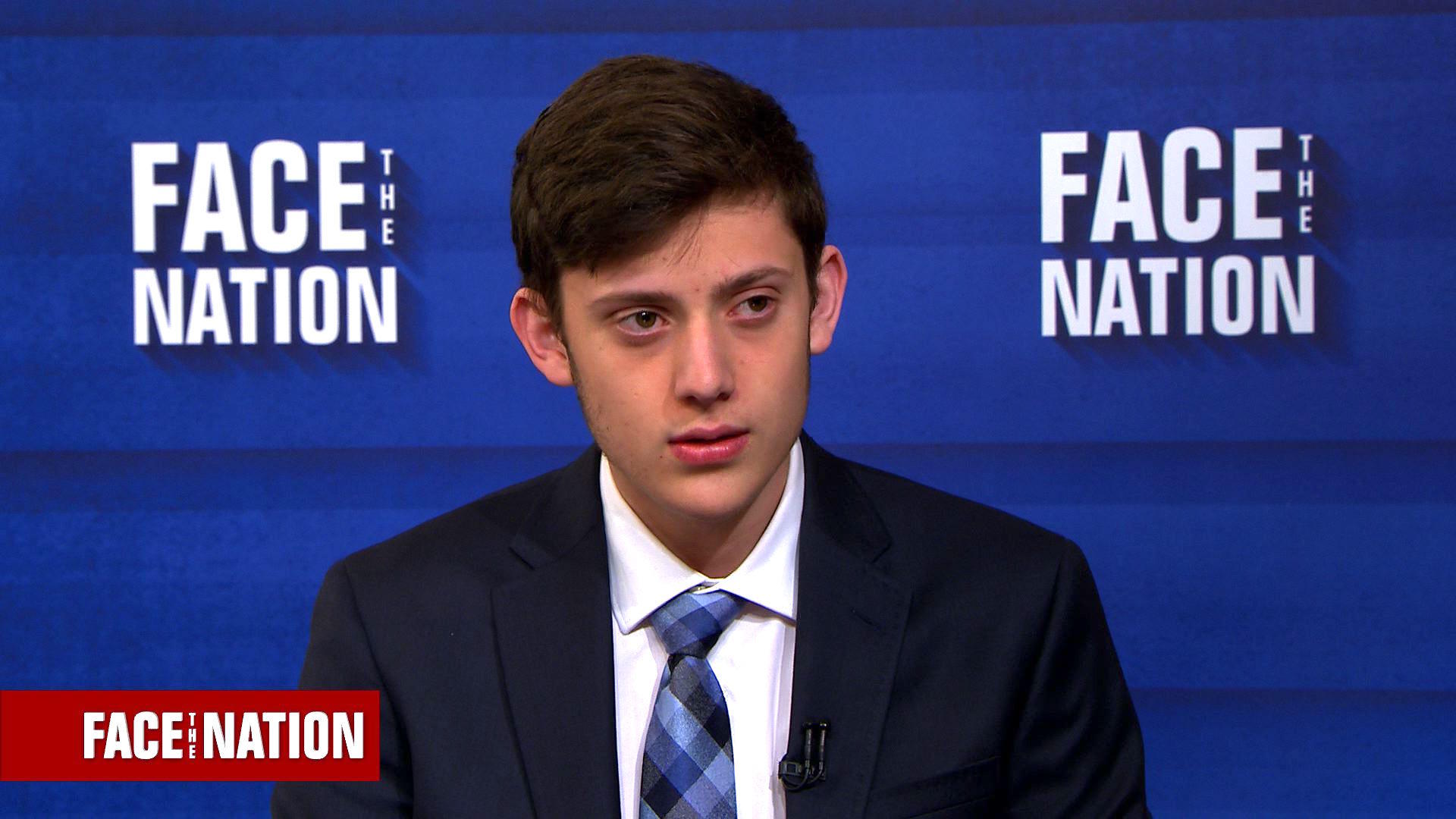 Hundreds of thousands of people took to the streets Saturday to call for tighter restrictions on guns in the March for Our Lives. More than 200,000 people marched in Washington, D.C., and listened to students from Marjory Stoneman Douglas High School in Parkland, Florida, where 17 people were shot and killed 40 days ago.

Kyle Kashuv is also a student at Parkland, but has a different view than most of his classmates. A supporter of the Second Amendment, Kashuv has been meeting with lawmakers in Washington to discuss solutions to curb school shootings and gun violence without infringing on gun rights.

The following is a transcript of the interview with Kashuv that aired Sunday, March 25, 2018, on "Face the Nation."

MARGARET BRENNAN: And Kyle Kashuv is here with us today. Kyle welcome to FACE THE NATION.

BRENNAN: Now you don't necessarily support the march that just happened. But tell me why you're here in Washington.

KASHUV: Well look I'm here for one very simple reason I don't want to see this ever happen again. And what I saw at the march yesterday which really frustrated me is that I have a different point of view, but what really concerned me was that how come I wasn't invited to speak at the march because as Americans we all have different point of views. And it's important to represent them all equally.

BRENNAN: And your point of view is what? You don't agree with the agenda that they're laying out there in terms of restrictions on assault weapons?

KASHUV: Well, yeah. I mean I talked to senators and I looked at all the facts and they all point in the same direction the a ban on assault weapons will not solve this issue. It's simply um-

KASHUV: That won't solve the issue. What we've seen is that there are certain things such as having - enforcing the regulation that's currently in law. I mean we've seen on so many different levels that the cowards of Broward failed, the FBI failed, Sheriff Scott Israel failed. So many different multilayered levels failed in Parkland and it's absolutely reprehensible that I didn't see one single poster yesterday at the march that said F the NRA, sorry. That said F Sheriff Scott Israel.

BRENNAN: So you are a survivor. You lived through this assault yourself. What do you think would have prevented another student like you from going through something similar?

KASHUV: Well look I mean this kid was flagged. He was flagged by the child protection services--

KASHUV: Yeah. I don't like to say his name out. I- I prefer not to. He was flagged by the FBI. He was flagged so many different times by the Broward Sheriff's Office. And it's - We need to see that we have to hold our government accountable. We have to, because this can happen again if our government does not do what it's supposed to do. And I find it ironic that after all this and we've seen so many different government failures, we want to trust the government even more.

BRENNAN: Do you have any points of agreement with your classmates?

KASHUV: I agree with them completely that this cannot happen ever again. But I differ with them on what policy needs to be made.

BRENNAN: So you've been here in Washington. You actually-- you were welcome to the White House. The first lady invited you as well. Do you think that you're going to stay politically involved?

KASHUV: Well look I'm going to do everything that I have to do to make sure this will never happen again and to ensure American's safety.

BRENNAN: So have you considered, I mean give me a sense when you go back to- to Parkland and you have to go to school and sit in the same classroom with some of these people you're disagreeing with. How many other fellow students support your way of thinking?

KASHUV: There's a very-- there's a silent minority at Stoneman Douglas who agrees with me completely. Something called the Marshal Program which was registered and implemented in Florida and which would allow properly trained officers and- and veterans and unemployed veterans to acquire the training to protect our schools because we've seen in Maryland that the only way to stop a bad guy with a gun is a good guy with a gun. And it really concerned me as to how come we did not see a single person-

BRENNAN: You would have liked more armed guards at the school?

KASHUV: Absolutely, I mean we saw it Maryland. He- he stopped the shooter. He did his job and had the cowards of Broward done their job, I think that the count in Parkland would have been much lower. We saw that in Maryland that a good guy with a gun stopped the bad guy with the gun. The only way to stop an active shooter on campus is to have another person to- to eliminate him.

BRENNAN: So in your meetings with people on Capitol Hill and at the White House did you get any promises to take action? Did they tell you anything would be done to follow through on what you're laying out?

KASHUV: Every single senator that I've spoken with does not want to see this happen. I spoke with Senator Marco Rubio-

KASHUV: He cares so much about this and it pains me to see how he's being represented in the media.

BRENNAN: But did they promise to do any of the things that you're asking for?

KASHUV: They promised to fight tooth and nail to make sure this will never happen again. But we have to make sure that the laws that we're enacting don't hurt America on a national scale. And that's why I think that we have to sit down with all members of this issue. Okay, sit down with- with me and David Hogg or Cameron Kasky and debate this and find a common middle ground because that's the only way that we're going to protect the American people.

BRENNAN: Kyle, thank you for coming on.

KASHUV: Thank you for having me.