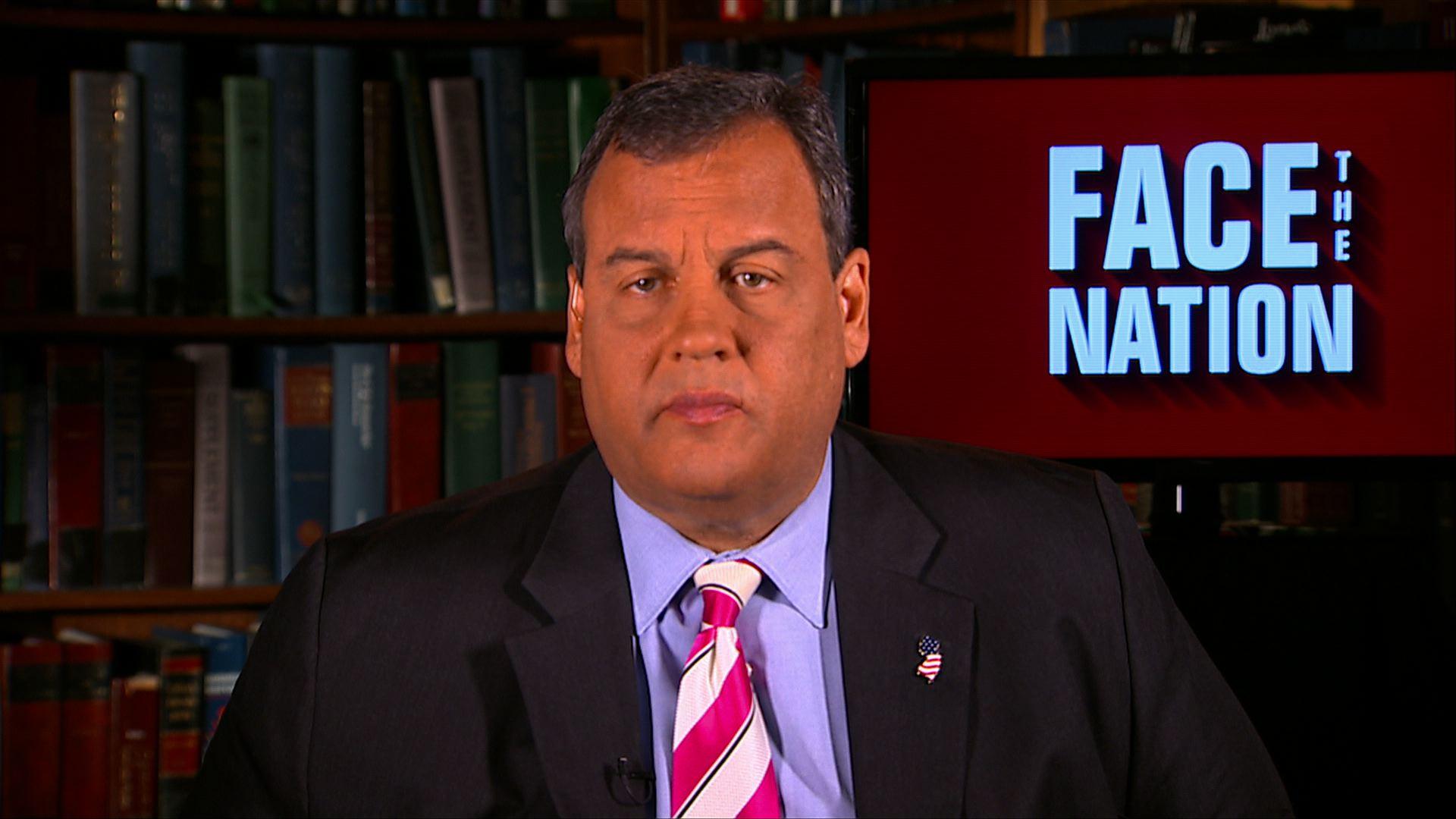 President Trump declared a public health emergency Thursday with the aim of curbing opioid abuse. Questions and criticism, however, have sprung up over the funding and implementation of the administration's push to "be the generation that ends the opioid epidemic."

JOHN DICKERSON: We turn now to New Jersey Governor Chris Christie. Governor, we have a lot to get to. But as a former federal prosecutor I want to start with this news about what Robert Mueller, the special counsel, may be up to. Help us put in context the sealed indictment. Is that a big deal?

GOV. CHRIS CHRISTIE: Well, it's typical to do it that way in my experience and especially if you want to get certain things organized before you confront the potential defendant. So - But I think one of the things to be concerned about here, John, is that there are strict laws against any of this type of leaking of grand jury activity. And so, you know, the idea that we may know in fact that there has been some activity done already depending upon who leaked that information, that could be a - that could be a criminal violation as well. So we have to be very careful about this stuff. Grand jury secrecy is very important to the effectiveness of a grand jury investigation.

JOHN DICKERSON: Let me ask you about it as a prosecutor. The president has said this is a witch hunt. He has questioned whether Mr. Mueller is compromised. As a prosecutor how would you have reacted to those kind of questions?

GOV. CHRIS CHRISTIE: Well, listen. I think that, you know, you're always going to be questioned as a prosecutor. That's what you have to always be ready for. And you have to go out, and do your job honestly, forthrightly, and let the evidence lead you to conclusions. Not have conclusions beforehand and look for evidence that confirm it. And so what I would say the important thing about today for the American people to know is the president is not under investigation.

JOHN DICKERSON: All right. We'll switch to the opioid issue. This week the president took action. He had previously said he wanted to spend a whole lot of money on the opioid crisis. One of the criticisms of the actions he took this week though is that there is not enough money. What's your response to that?

GOV. CHRIS CHRISTIE: It's a totally misplaced criticism, John. And let me tell you why. We recommended in our first commission report that he use either the Public Health Safety Act or the Stafford Act to be able to declare a national emergency. He did that under the Public Health Safety Act. Now it is incumbent upon Congress to be able to appropriate money into the public health emergency fund. There's only $57,000 there right now. Nothing the president can do about that. Congress appropriates.

And I believe from talking to bipartisan members of Congress that this is not something that's going to take very long at all. They're going to react to this emergency like they've reacted to funding Puerto Rico, funding Texas. This is that type of emergency. Let me put it in context for you, John. 175 people are dying a day in America. If those people were dying at the hands of a terrorist organization, how much money would the United States Congress be willing to spend to make it stop? And that's the type of emergency we're dealing with. And I'm sure Congress is going to approach it with that type of urgency in concert with the president.

JOHN DICKERSON: And the president though didn't say what you said in September in New Jersey when you were addressing this issue. You said, "I don't want you to worry about money. I want a wish list." Why didn't the president say something like that?

GOV. CHRIS CHRISTIE: Well, I think he laid out things that are going to cost real money, John. If you listened to what he said this week at the White House, you know, he talked about waiving certain Medicaid rules that will open up literally thousands of treatment beds to poor folks across this country who need treatment who right now can't get access to it.

He talked about increased training for physicians. He talked about increased regulation on physicians.  And then this week we'll bring him a final report with even more recommendations on how to deal with this problem. We have to stop our people from dying. And I know the president's committed to this. And everyone who listened to him this week with the personal story that he told about his brother understands that this is just not a policy issue for the president. This is personal. And I'm proud of him.

JOHN DICKERSON: One of the things the president said that he said it was the most important part of what was he proposing was a massive advertising campaign to get people, he said, especially children, not to want to take drugs in the first place. You've worked on this issue a lot. Is that really going to do it? Or I've heard you tell stories about your mother's smoking habit and your friend who had died from addiction. Would they have been stopped by just being told, "Don't do it"?

GOV. CHRIS CHRISTIE: Listen. I think that's part of what we need to do. In New Jersey, John, we've done this. We've spent $25 million in the last six months on an advertising campaign in New York and Philadelphia to eliminate the stigma around treatment and to encourage people to reach out and get help.

And we are now working on another $25 million campaign just in New Jersey for advertising to young people to talk to them about the dangers of prescription jobs and why even if it's given to you by a doctor, doesn't mean it's good for you, doesn't mean it's safe. So I think that's an important part of it. It's only part of it, but it's a very important part of it because we need people to understand that this crisis started not on a street corner somewhere.

This crisis started in the doctor's offices and the hospitals of America. We consume 85%, John, of the world' prescribed opioids. That's outrageous. Our medical community and our pharmaceutical companies have a lot to do with that along with our insurance companies. So everybody has to pitch in to turn this around.

JOHN DICKERSON: Okay. We're going to take a short break. We'll be back in a minute with more from Governor Christie.

JOHN DICKERSON: And we're back with Governor Chris Christie. Today is the fifth anniversary of Super Storm Sandy. Damages were over $35 billion in the state of New Jersey alone, and dozens were killed. Governor, given your experience with that hurricane, I wondered if you could reflect on the response to Puerto Rico. You know about federal-state coordination. The president gave himself a 10, gave his administration a 10 out of 10 in that response. Do you think it deserves that grade?

GOV. CHRIS CHRISTIE: Well, I gave him a grade this week of a B+, so it's close. But what I would say is the federal government has brought the resources to bear on Puerto Rico that's needed to be brought to bear. The real problem, John, is that, you know, unlike where New Jersey was from an infrastructure perspective back in 2012, Puerto Rico's infrastructure because of its bankruptcy was degraded significantly before the storm.

And so, for instance, I've heard stories. We've sent more folks than any other state in America to Puerto Rico to help. 1,100 National Guardsmen and state police, all of who have Sandy experience. And as they've started to come back and rotate new folks in, what they've told me is the big problem is not having enough supplies. It's that literally there are no roads that are passable outside San Juan in many regions.

And so they're having to airlift things there. And it's delaying things significantly while they try to rebuild these roads and get the infrastructure back up on power.

And so all of those things make it more logistically difficult. But I've spoken to Tom Bossert, the Homeland Security advisor, on a number of occasions and Governor Rossello on a number of occasions. And I think they both believe that all the resources that need to be brought to bear are being brought to bear. And we're just going to have to work even harder at Puerto Rico because of how bad of shape it was in from an infrastructure perspective before the storm hit.

JOHN DICKERSON: All right. Governor Chris Christie, thanks so much for being with us.

GOV. CHRIS CHRISTIE: Thank you, John. Thanks for having me.

Esper: January 6 committee "needs to get to the bottom of the truth"