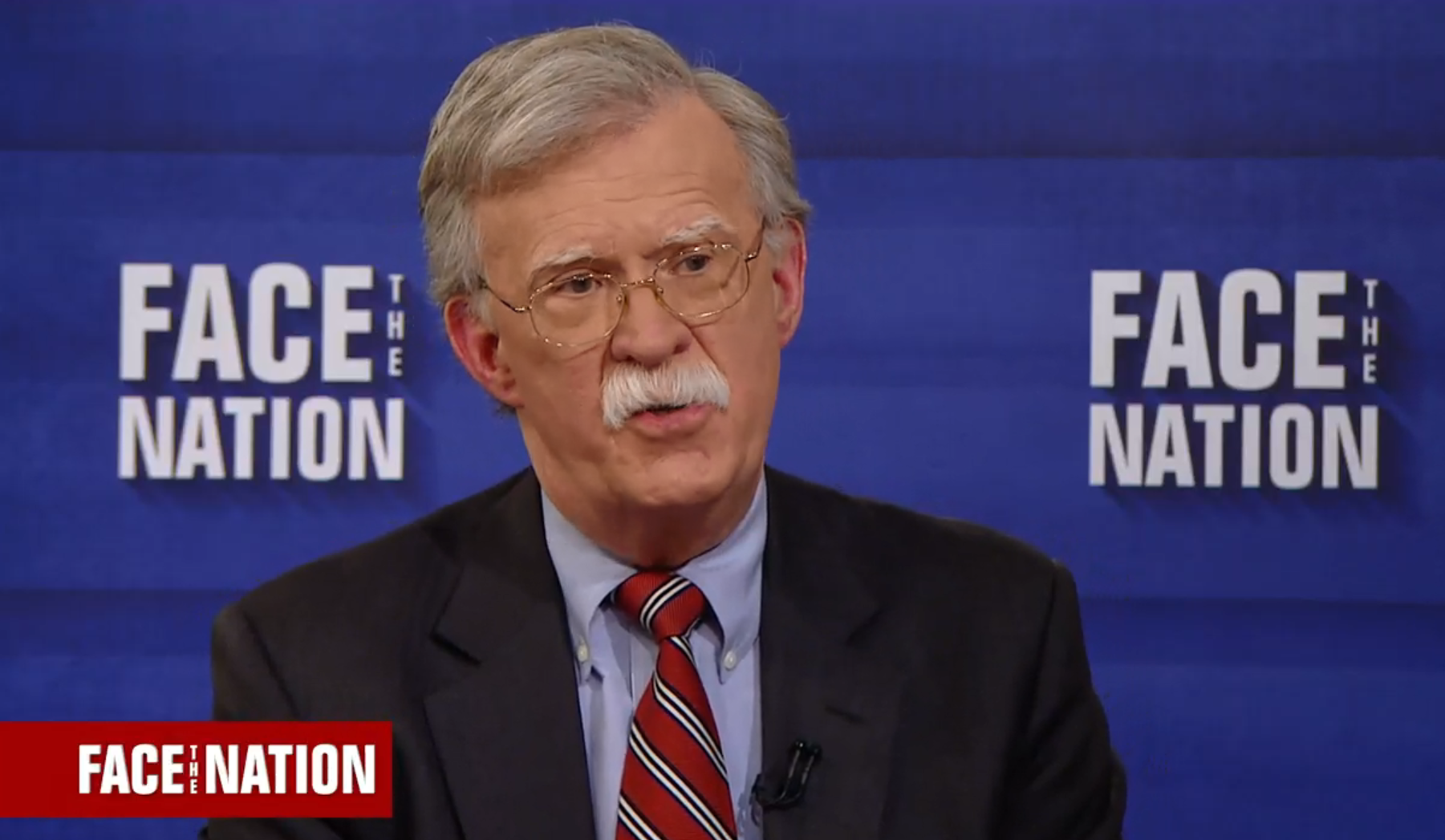 "It's never gone this far," the president said on Friday, adding later that "this isn't like past administrations, we don't play games." The talks set the stage for Mr. Trump's own upcoming high-stakes summit with Kim, where he hopes the U.S. will make history in striking its own deal with the regime.

The following is a transcript of the interview with Bolton that aired Sunday, April 29, 2018, on "Face the Nation."

BOLTON: Glad to be with you.

BRENNAN: You're just about three weeks on the job now you have this South Korean led diplomatic breakthrough. Do you believe that Kim Jong Un is ready to negotiate away his weapons or is he just trying to soften his image?

BOLTON: Well I don't think we know at this point. I think if he has made a strategic determination that- that North Korea would be better off without nuclear weapons then I think we've got something to talk about and I think the president would be eager to capitalize on the opportunity. But I think it's clear we're here where we are today because of the pressure that the Trump administration has put on North Korea. Economic pressure, political, military pressure. I think this is widely recognized president Moon of South Korea himself has repeatedly said the opportunities for the Olympics, the opportunity for the North-South summit would not have occurred without this pressure campaign. The Prime Ministers of Japan and Australia, the president of France, the chancellor of Germany have all said the same thing. So that's why we're here now. And I think it's up to the North Koreans to show us that they really do intend to give up nuclear weapons.

BRENNAN: Well arguably North Korea also walks in in a position of some strength- economic weakness perhaps but this nuclear program is further along than any past administration has encountered. So are-

BOLTON: Well because of the mistakes of 25 years of past administrations-

BRENNAN: -but is it a requirement that Kim Jong Un agree to give away those weapons before you give any kind of concession?

BOLTON: I think that's right. I think we're looking at the Libya model of 2003, 2004. We're also looking at what North Korea itself has committed to previously and most importantly I think going back over a quarter of a century to the 1992 joint North-South denuclearization agreement where North Korea committed to give up nuclear weapons and committed to give up uranium enrichment and plutonium reprocessing. Now we've got other issues to discuss as well; their ballistic missile programs, their biological and chemical weapons programs, their keeping of American hostages, the abduction of innocent Japanese and South Korean citizens over the years. So there's a lot to talk about.

BRENNAN: Will the U.S. accept this invitation from the North to inspect their nuclear site when it's taken down in May as promised?

BOLTON:  Well we'll see exactly what that is, you know the-the

BRENNAN: Well the South says that's what the North promised

BOLTON: the North- the North. Well it's- it's interesting because we've been to this place before. I hope it's a sincere commitment by the North. But I'll just read you a sentence if I may. "In a gesture demonstrating its commitment to halt its nuclear weapons program, North Korea blew up the most prominent symbol of its plutonium production Friday. The destruction of the cooling tower bore witness to the incremental progress that has been made and U.S. led multilateral efforts to end North Korea's nuclear weapons program." June 27, 2008, New York Times. Now the selfsame New York Times last month reported that President Trump is going to have difficulty with North Korea because new satellite evidence suggests that North Korea is expanding its plutonium production. So- we want to see real commitment. We don't want to see propaganda from North Korea.

BRENNAN: You haven't seen such act-actions so far?

BOLTON: You've- They've said that they're going to give up nuclear testing and ballistic missile testing. They haven't conducted any recently. That's true. That could be a very positive sign or it could be a sign that they've reached the level of development where they don't need testing now. We've seen this in other contexts as well. President Trump is determined to see this opportunity through. Hopeful that we can get a real breakthrough, but we're not naive in the in the administration and-and a lot's going to ride on this meeting with with Kim Jong Un.

BRENNAN: So there are these headlines that-- from South Korea saying Kim Jong Un would abandon his weapons if the U.S. promises not to invade his country. Are you going to make any kind of promise like that?

BOLTON: Well, we've heard this before. This is- the North Korean propaganda playbook is an infinitely rich resource.

BRENNAN: But it puts a burden on the United States.

BOLTON: I don't think it does really. I think that if you look at the decision to give up nuclear weapons as a real strategic decision that North Korea has to make. What we want to see from them is evidence that it's real and not just rhetoric. In the case of Libya for example and it's a different situation in some respects those negotiations were carried out in private they were not known publicly. But one thing that Libya did that led us to overcome our skepticism was that they allowed American and British observers into all their nuclear related sites. So it wasn't a question of relying on international mechanisms. We saw them in ways we had never seen before.

BRENNAN: That sounds like you want inspections beca- before any kind of sanctions relief.

BOLT: Well I think it would be a manifestation of the strategic decision to give up nuclear weapons doesn't have to be the same as Libya but it's got to be something concrete and tangible it may be that Kim Jong Un has some ideas and we should hear him out.

BRENNAN: According to CBS' reporting, Singapore is the preferred location for this meeting between President Trump and Kim Jong un. When will you make this determination on location and how important is it?

BRENNAN:  He said within the next few weeks. Three to four.

BOLTON: He- the president is ready to go on this. And- and so we're eager to come to a conclusion so we can do all the logistical planning but I don't want to preempt any any news that that he may want to make. We just don't have we don't have it pinned down yet.

BRENNAN: Is there any update on the three Americans that are being held prisoner in North Korea? I mean are they essentially going to be held hostage to the success of this diplomacy or do they need to be released before the president walks into that room?

BOLTON: Well I don't want to get into the discussions that-that we've had. I'll just say this. These three Americans are at the top of the president's mind. And in- in exchanges between normal nations these people wouldn't even be held. So I think North Korea should look at this very seriously.

BRENNAN: This is a gesture though that they're not required to take before the meeting?

BOLTON: It would be a demonstration of their sincerity. We're waiting to see what their decision is.

BRENNAN: Can you tell us anything about their status?

BOLTON: Well I'd rather not get into the discussions-- at this point but it's very much on the president's mind.

BRENNAN: I want to ask you as well about this other big decision upcoming on the Iran nuclear deal. You've been very public in the past about your skepticism and it's led diplomats in private to say and to question whether you're going to be a broker here who could actually present another option to the president. If the Europeans can pull off a side deal a fix to the nuclear plant, do you actually think it's possible to keep it?

BOLTON: Well it's the president's decision. I mean one thing people have to keep in mind is that I've changed roles here. When I was a private citizen I could say whatever I've wanted to it was a great a great luxury but --

BRENNAN: In March you said it cannot be improved and it simply blew smoke and mirrors to think we can fix it. That wasn't that long ago.

BOLTON: So I don't - What I said was what I believed I don't back away from them. But that's not my job now. My job is to give advice to the president. He'll make that decision. It's his call. I'm the national security adviser not the national security decision maker. And in fact on the Iran nuclear deal issue I have presented him with options and I'll continue to do it right up until he makes the decision. I think that's critical for the proper functioning of the national security system and it's my obligation to do that.

BRENNAN: So if Secretary Pompeo can craft a side deal you are open to accepting and to keeping the Iran nuclear deal?

BOLTON: I think it's a question of the president being open to make the final decision. It's the job of his advisers to give advice. He's the decision maker.

BRENNAN: So is the U.S. put sanctions back on Iran on May 12th, does that mean the U.S. has withdrawn?

BOLTON: Well there are a variety of things that could happen and I don't want to get into a discussion of what the hypotheticals might be but certainly withdrawal is under consideration. The president has said this repeatedly. His views on the nuclear deal have been uniform consistent and unvarying since the campaign of 2016, and we'll see what happens.

BRENNAN: Well the world is watching. Thank you so much.

BOLTON: Glad to be with you --

BRENNAN: John Bolton. Thank you for coming on "Face the Nation." Hope to have you back soon.

BOLTON: Thank you very much.