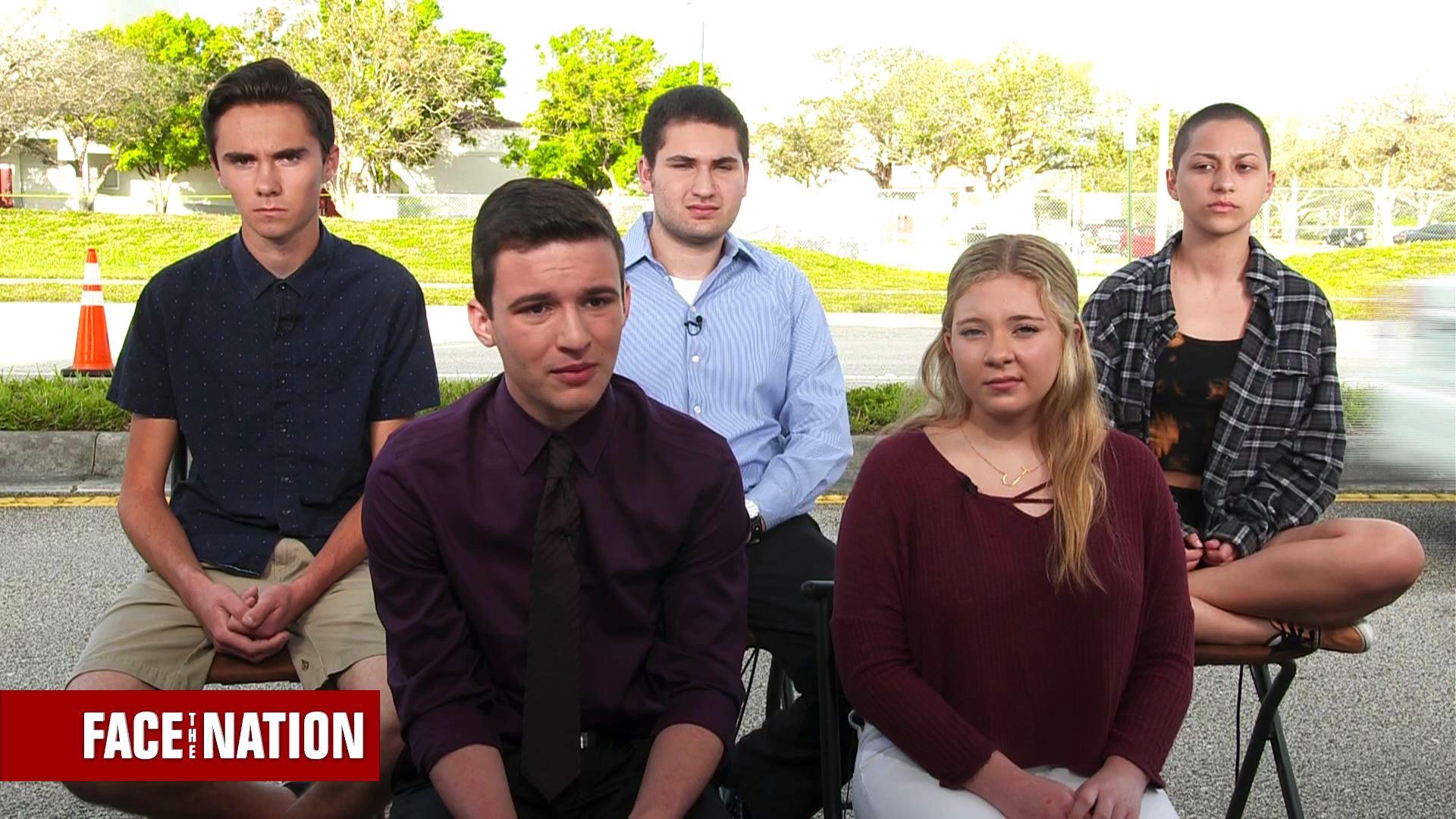 In the wake of last week's deadly shooting at a Parkland, Florida, high school that left 17 people dead, students at Marjory Stoneman Douglas High School have taken to the airwaves and social media to demand tighter gun laws. Their advocacy and anger serve as a stark new facet in the all-too-familiar routine following mass shootings in the U.S.

The students say they will organize and march to hold lawmakers who take money from the National Rifle Association accountable. David Hogg, Alex Wind, Emma Gonzalez, Cameron Kasky and Jacqueline Coren joined us to discuss the shooting, their plans for a march on Washington and what kind of legislation they want to see passed in the wake of the shooting.

The following is a transcript of the interview with the students that aired Sunday, Feb. 18, 2018, on "Face the Nation."

NANCY CORDES: Joining me now are five students from Parkland, Florida who attend Marjory Stoneman Douglas High School. They are David Hogg, Alex Wind and Emma Gonzalez, plus Cameron Kasky and Jacqueline Coren. Thanks so much to all of you for joining me and Cameron, I'll start with you. You say the adults have let you down.

CAMERON KASKY: Well, the adults in office have let us down. Absolutely. And fortunately we have a lot of support from the older generations here, but what we're trying to do here March for Our Lives is say, the adult politicians have been playing around while my generation has been losing our lives. If you see how they treat each other in the office, if you see the nasty, dirty things going on with them, it's- it's sad to think that that's what they're doing while seventeen people are being slaughtered, gunned down only yards away from where we're sitting right now. And March for Our Lives has support from everybody. And at the end of the day this isn't a red and blue thing. This isn't Democrats or Republicans. This is about everybody and how we are begging for our lives and we are getting support. But we need to make real change here and that's exactly what we're going to do.

NANCY CORDES: So, Emma, what is the plan? You say you want to spark a national movement. It's one thing to talk about it. It's another thing to actually make it happen. What are you going to do.

EMMA GONZALEZ: Well what we have set up right now we have a website, March for Our Lives. We're going to be doing a march in March on Washington where we get students all over the country are going to be joining us. These kids are going to make this difference because the adults let us down. And at this point I don't even know if the adults in power who are funded by the NRA I don't even think we need them anymore because they're going to be gone by midterm election. There's-- there's barely any time for them to save their skins. And if they don't turn around right now and state their open support for this movement they're going to be left behind. Because you are either with us or against us at this point.

CAMERON KASKY: We are giving a lot of the politicians that we feel neglected by a clean slate because that's the past and we understand that. But from here on, we are creating a badge of shame for any politicians who are accepting money from the NRA. It is a special interest group that has most certainly not our best interests in mind. And this cannot be the normal. This can be changed and it will be changed. And anybody who tells you that it can't, is buying into the facade of this being created by the people who have our blood on their hands.

NANCY CORDES: David, a lot of people saw the reporting that you did from inside the school while the shooting was taking place and I'm truly sorry that that all of you had to live through that. But I want to read to you what President Trump said last night. He said that it's actually the Democrats that have let you down because they didn't pass legislation when they controlled Congress. Does he have a point?

DAVID HOGG: President Trump you control the House of Representatives. You control the Senate and you control the executive. You haven't taken a single bill for mental health care or gun control and passed it. And that's pathetic. We've seen a government shutdown. We've seen tax reform but nothing to save our children's lives. Are you kidding me. You think now is the time to focus on the past and not the future to prevent the death of thousands of other children. You sicken me.

NANCY CORDES: So what kinds of laws do all of you think should be on the books that aren't right now?

DAVID HOGG: Well what I think needs to be on the books right now that isn't is literally any law that's from either side of the political spectrum. If you're a Republican that supports mental health care we want you out there making your voice heard because that's just as important as gun control or gun safety laws at this point because Democrats also want gun safety rules and we can't get into any more debates. We need discussion. We've had the debates and people have died as a result children have died and will continue to if we don't stop now and look at both sides of this because we can't wait around any longer. Children are dying as a result. And we need to take action. And I call on President Trump and the Republican controlled House and Senate and Executive Branch to work together, get some bills passed and stop taking money from the NRA because children are dying and so is the future of America as a result.

CAMERON KASKY: And I just want to say something I've heard a lot is the word gun rights and that has the connotation that we are trying to strip people of their rights. Well first of all, we have the right to live. And second of all here at March for Our Lives at least for me. We don't want to take the guns away from Americans. My father is a police officer. He has guns and I understand that having concealed weapons is good for protecting yourself. But an AR 15 is not needed to protect your house from robbers. It's not needed to hunt bears, an AR 15 is a weapon of war and a 19 year old who is mentally challenged and has problems was able to buy an AR 15 easily. We don't want to disarm America. We want to make America have to work for their weapons. And we have to make sure that everybody who has this kind of power in their hands has been cleared to have it. Because if Nikolas Cruz had gone through five minutes with any medical professional they would have said this person does not need an AR 15. This person needs a counselor and 17 people would not have needed graves.

NANCY CORDES: Alex, your own Senator Marco Rubio says that more gun laws won't do anything. That anyone who wants to commit violence is going to find a way to get a gun.

ALEX WIND: If you think that, Senator Rubio, then change the way it's easier to get a gun. OK? If you think it's too easy to get a gun to do something about it make it not easier to get a gun. March 24th on the March for our Lives is only the beginning. This is the first march. But I can guarantee it will not be the last. We will be marching for the 17 we lost at our school. We will be marching for everyone we lost at the Newtown Sandy Hook shooting, at Columbine, at Virginia Tech in San Bernardino, Orlando at the Pulse shooting and at Las Vegas. This is only the beginning and March 24th things are going to change.

CAMERON KASKY: It's not our job to tell you, Senator Rubio, how to protect us. The fact that we even have to do this is appalling. Our job is to go to school, learn and not take a bullet. You need to figure this out. That's why you were unfortunately elected. Your job is to protect us and our blood is on your hands.

NANCY CORDES: Well, I know that millions of people are watching to see where you take this movement. You've already got tens of thousands of followers online. And we'll be watching to see if you're able to change a pretty entrenched political dynamic here in Washington. Thank you so much, to the five of you, for joining us today.

DAVID HOGG: Thanks for having us.

NANCY CORDES: And we'll be right back.