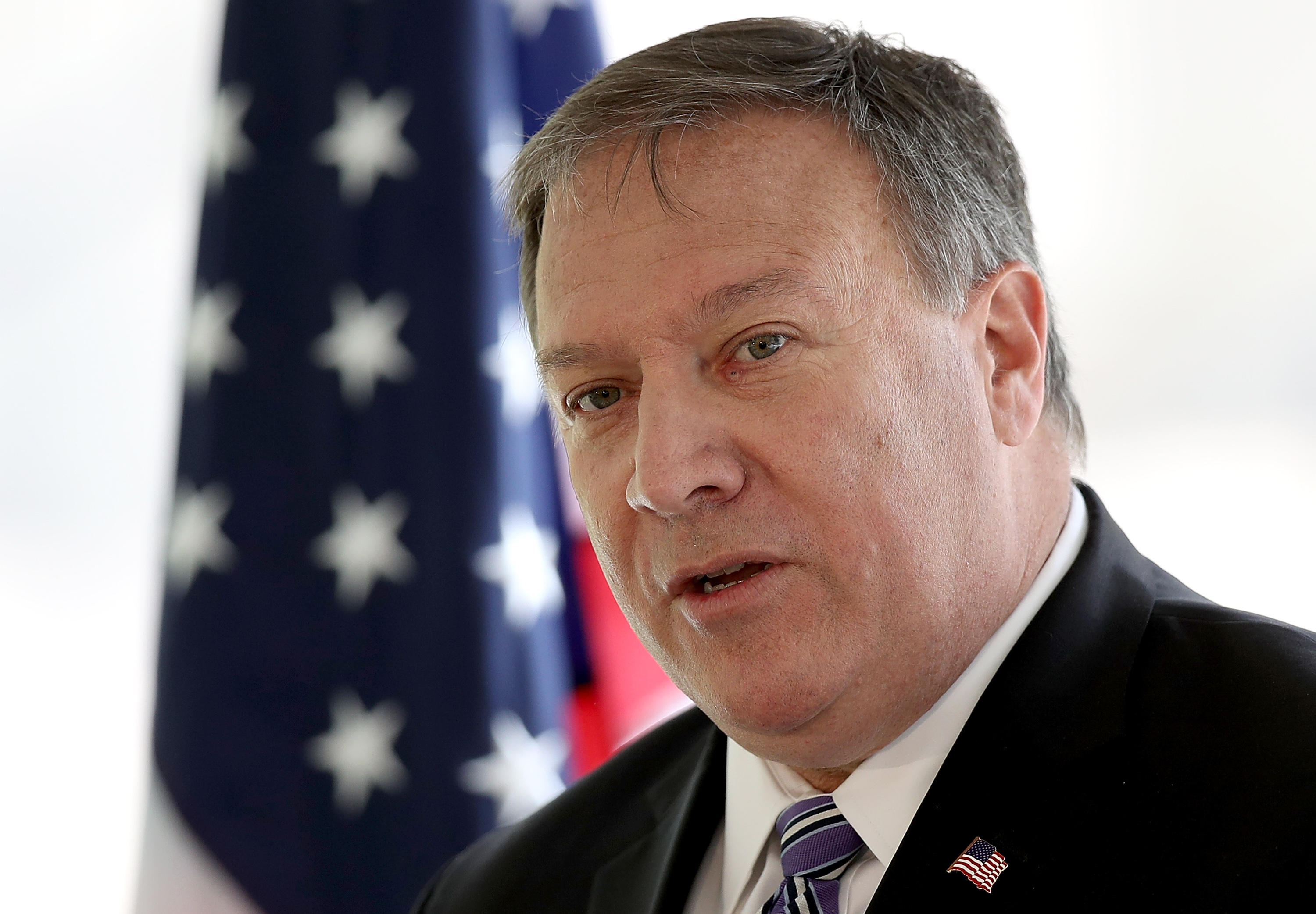 Trying to discern how much of North Korea's threatening language is backed up by  genuine military capability is, in large part, the mandate of CIA Director Mike Pompeo, who sat down on Sunday with CBS News in Washington to discuss that, and the violence in Charlottesville, Virginia.

JOHN DICKERSON: And we want to welcome the director of the C.I.A., Mike Pompeo, to the broadcast. Welcome, Mr. Director. Thank you for being here.

JOHN DICKERSON: You've thought a lot about terrorism in your career. Republican senators Rob Portman, Cory Gardner, Marco Rubio, Fran Townsend, who was the terrorism advisor to George Bush, have all labeled this terrorism in Charlottesville. What's your view?

MIKE POMPEO: Well, let me begin by adding my personal condolences for the lives that were lost in Charlottesville. It's an absolute tragedy. With respect to the event, the car ramming, there's a civil rights investigation that began last evening or this morning by the Justice Department that will make a determination about whether it's appropriate to charge this as a act of terror. I have great confidence that they will investigate that with enormous rigor and get to the right outcome.

JOHN DICKERSON: What's your personal view though of this? I mean, if this - if terrorism is using violence to send a political message, do you think that's what this is?

MIKE POMPEO: Yeah, I think it's best for the C.I.A. director to leave this to the Justice Department.

JOHN DICKERSON: Let me ask you. When you - when you were in Congress in October of 2016, three men were charged with trying to attack Muslims in your state. And - And this is what you said about bigotry at the time. "We should deal with it quickly, harshly and ensure it doesn't grow." That was very specific and tough. Should the--

JOHN DICKERSON: --president have been that specific yesterday?

MIKE POMPEO: I think he was just as specific. He said bigotry is unacceptable. Hatred is unacceptable in any form, whether that's the form that was I referring to that, that day in Kansas or the events that happened yesterday in Charlottesville. I think the president was, frankly, pretty unambiguous about what his Justice Department is going to do, the way he views how utterly inappropriate it is for this hatred and bigotry. I think the president's remarks were very clear.

JOHN DICKERSON: The criticism is that he's been tough on the media, on, on all kinds of people quickly and without, you know, much restraint. In this case he said, "On all sides." People marching with Nazi flags, that's not really on all sides.

MIKE POMPEO: No, I agree. It's, it's - when someone marches with a Nazi flag, that is unacceptable. And I think that's what the president said yesterday. I think he was speaking very directly to the incident there. We've all seen the videotape. And I think he was speaking directly to that and condemning the hatred and the bigotry that was on display yesterday.

MIKE POMPEO: Yeah, I can't answer that. First, it won't be my decision. It'll be the president's working closely with the intelligence that we provide him. But suffice it to say I'm, I'm familiar with the facts. We're - We're not at an imminent risk of that taking place today. An attack from North Korea is not something that is imminent. And the American people should know that this administration is doing everything with its power. The president has enabled the intelligence community and the Department of Defense to be sure that we're protecting America from this threat.

JOHN DICKERSON: You said you didn't want to weigh in what would trigger, but the president seemed, seemed to this week. And I think that created some confusion. The president said, "North Korea best not make any more threats to the United States. They will be met with fire and fury like the world has never seen." That seems to be a president saying, "If they make a threat, the following thing will happen." They made a threat. Nothing happened. Explain that to people. Wasn't that a red line he was drawing?

MIKE POMPEO: No, I don't think so at all. In fact, this administration has done a fine job of not drawing red lines that we're not prepared to enforce. I think what the president was doing there was very effective. He was communicating to many audiences. Certainly the rogue leader in North Korea. Communicating to him that the strategic patience of the past decades is no longer. We're just too close to him having this capacity to hold America at risk.

I think secondly he was communicating to the world, to China and to others who can influence the outcome there. We had - we had a great success. We have the whole world voting to sanction North Korea, something that hasn't happened for an awfully long time. This is real progress as a direct result of what President Trump has done and the way that we have communicated the threat not only to America, and to Japan and South Korea, but to the entire world from this rogue leader.

JOHN DICKERSON: Is it U.S. policy that North Korea will not be allowed to have a weapon with a nuclear warhead that can reach the United States?

MIKE POMPEO: The president has made very clear. I'm with him.

MIKE POMPEO: He has, he has made it--

JOHN DICKERSON: Can you just say it--

MIKE POMPEO: John, he has--

MIKE POMPEO: He has made it very clear. John, he's made it very clear. The president, I'm with him almost every day, giving him his daily intelligence briefing. He has made very clear that the United States finds it unacceptable for a rogue leader like Kim Jong-un to have the capacity, a ballistic missile with a warhead that is integrated and fully deliverable to the United States and hold America and the world at risk. He finds that unacceptable, and he is simply not going to permit it to happen.

JOHN DICKERSON: The president was very critical of the Iraq war. He said it's the great blunder of American, in American history. It was based on intelligence. He's going to make a decision on the red line you just drew on intelligence. How is he going to know the intelligence is right in this case when he's been so critical about that previous instance when a president took action on intelligence?

MIKE POMPEO: Yeah, thanks for the question, John. That's actually not true. It's not moving faster than policy makers knew. As I said, you're going to have Director Panetta and I think Mr. Morell, former acting director, on. It was their good work that has been tracking this all along. The intelligence community has actually had a pretty good picture. Can we predict days or weeks? No, certainly not. But we have certainly had a pretty good handle on the work that's been done to develop these system of systems.

JOHN DICKERSON: What picture do you have about the North Korean leader and his predictability? In a sense he is following a very familiar North Korean script. And if he follows the script, doesn't that suggest that he has a plan and he's not irrational and therefore wouldn't use weapons irrationally?

MIKE POMPEO: So, I've described him as rational. One can - one can debate that term. It's got lots of different meanings. He - he does respond to external stimulus. That is, we have seen that he listens to clear communications. He understands that his primary goal of staying in power, keeping the regime intact has to--conducts a-- requires a balancing act.

And to the extent we can isolate him, we can get the Russians, and the Chinese, and even-- you-you the president had a phone call with President Macron earlier this week. This is a global problem. To the extent we can get the world to work on this, we'll provide good intelligence so that we can make the right decisions to get that regime to the right place, a denuclearized peninsula.

JOHN DICKERSON: The U.S. contained the Russians. Pakistan has nuclear weapons and has contained them. Why not contain North Korea?

MIKE POMPEO: This regime is different. This regime's different. I've heard - I've heard some say, I think Susan Rice said, "We just need to learn to live with this." President Trump finds that unacceptable. This is - this is not a leader for whom containment is a policy that makes sense for American national security.

JOHN DICKERSON: Let me ask you about that leader. You said on the one hand, you said out in Aspen, "The most important thing we can do is separate these two," meaning the North Korean nuclear program from the leader. But Secretary of State Tillerson said, "We do not seek regime change." Those two things seem to be in tension.

MIKE POMPEO: Not at all. Those are the same statement uttered by two men who used simply different words. I was getting to the exact policy that Secretary Tillerson was. We cannot have Kim Jong-un in possession of the capacity to hold America at risk from an ICBM that is nuclear armed. That's the mission set the president has given his national security team. Add to that ballistic missile defense, and that is the mission that the president has demanded that his team deliver to him.

JOHN DICKERSON: Thanks for being with us. And when we come back in a minute, we'll take a closer look at the president's response to the clashes in Charlottesville yesterday.