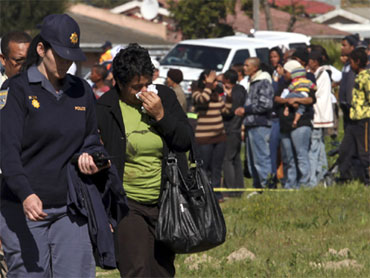 A driver taking children to school went around a closed railroad crossing gate Wednesday, then was hit by an oncoming train that killed at least nine pupils and injured five others, police and witnesses said.

Parents sobbed at the scene as grieving families stood near the completely smashed van that had been transporting 14 children at the time of the collision in the Blackheath area of Cape Town.

"The other five children, all boys, sustained serious to critical injuries. They were taken to Red Cross and Tygerberg hospitals respectively," Jones said. "Nobody was injured inside the train during the incident."

Jones said police are investigating a case of homicide against the van driver, who is at the hospital in critical condition.

A preliminary investigation at the scene indicated that the crossing gate was down when the van crossed the railway track, police said.

"We have launched a culpable homicide investigation to determine circumstances surrounding the incident and whether anyone can be held criminally accountable for the deaths of the children," Jones said.

Railway officials released a statement that said "the crossing is protected by road signs, flashing lights and booms, which were confirmed to be in working order."

South African road fatality rates are among the highest in the world.