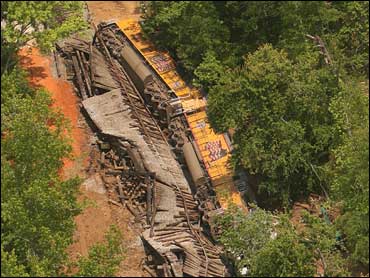 One of the cars, carrying one fully fueled rocket section, overturned, reports CBS News correspondent Bob Orr. But there was no fire, no explosion and, NASA says, no danger.

The cause of the bridge collapse is under investigation.

The shuttle's twin boosters are 150 feet tall and consist of four propellant segments each. They are used during liftoff and the first two minutes or so of flight to help the spacecraft break free of Earth's orbit, and are then jettisoned into the sea, after which they are recovered, refurbished and reused.

It was a leak of burning gas between two segments of a solid booster rocket that caused the Challenger shuttle explosion, which killed seven astronauts in 1986.

NASA spokesman Kyle Herring said the segments were not scheduled for use during the next shuttle flight, the liftoff of Atlantis on June 8, but for missions in October and December. NASA's solid rocket boosters and their parts are freely interchangeable.

Space experts on the scene say it won't be difficult to clear the wreckage, and even if the rockets are damaged, that shouldn't interrupt the shuttle's flight schedule, adds Orr. But any delay could threaten the space agency's ability to complete the International Space Station by its 2010 deadline.

The Alabama Emergency Management Agency said the train landed on its side on the ground in the woods next to the tracks, none of the cargo spilled, and there appeared to be no fire.

It was the second time in less than a week that the train jumped the tracks while carrying the booster segments across the country from the manufacturer, ATK Launch Systems Group of Promontory, Utah, to Cape Canaveral, Florida, Herring said.

Last Friday, two axles on one car came off the tracks for unknown reasons about 60 miles west of Salina, Kansas, while the train was traveling at less than 20 mph, Herring said. The train was back on the tracks after several hours, the spokesman said.

A spokesman for the manufacturer, Bryce Hallowell, said the rocket company had two employees and a contractor on the train Wednesday, and they suffered non-life-threatening injuries. The condition of the other three was not immediately released.

"It's our understanding the motors are stable," Hallowell said. After an inspection, he said, the company will work with the railroad to safely remove them.

NASA officials said two locomotives, a train car behind them, and one car with a shuttle booster overturned. The fuel in the rocket, aluminum perchlorate, has the consistency of a rubber eraser and there was no danger of it igniting, according to NASA.

Hallowell said the train was taking the same route to the Kennedy Space Center that has been used for 30 years or more. The train trip can take more than a week.

The accident was the latest in a run of bad luck for the space agency.

In February, astronaut Lisa Nowak was arrested on charges of trying to kidnap a romantic rival. Later that month, a freak hailstorm caused thousands of dents in space shuttle Atlantis' external tank as it sat on the launch pad, delaying the flight for months.

Last month, a worker at NASA's Johnson Space Center in Houston shot a colleague to death and then killed himself.