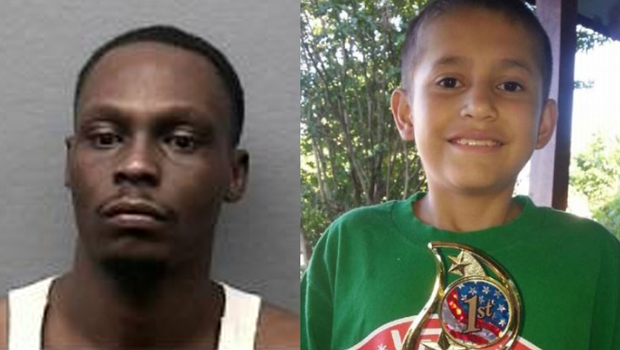 He is charged with murder in the death of 11-year-old Josue Flores, a sixth-grader at Marshall Middle School.

The boy was attacked and stabbed to death on his way home from school Tuesday night in north Houston. He had stayed late to participate in the school's science club.

Police said Calhoun was walking down Fulton near James Street when he stabbed Flores several times for unknown reasons. The suspect fled, and the victim was taken to the hospital where he later died.

Police provided no information Wednesday on a possible motive or relationship between Josue and Calhoun.

The boy's sister said he was walking home with just a backpack and didn't have a laptop or cell phone on him. She doesn't know why he was attacked.

Another sister, Guadalupe Flores, said her family was sad and confused.

"I'm trying to wrap my mind around it," she said Wednesday. "I hope that my parents' pain can be eased a little by our family and friends coming over."

"He wanted to be a doctor, he wanted to help people," Sofia Flores added.

The school had extra police on campus Wednesday morning as concerned parents brought their children to class. The principal met with the Flores family on Wednesday to personally express condolences.

"This is an incredibly sad time for the school," the Houston Independent School District said in a statement. "We extend our support and sympathy to the family and friends of this student, as well as the school community."

Court records show Calhoun was born in Michigan and that his criminal record in Houston goes back to 2012 when he pleaded guilty to a reduced charge of making a terroristic threat for threatening to stalk and assault someone. He was sentenced to 150 days in jail.

Among several criminal cases involving Calhoun in Harris County, Texas, a woman who identified herself as Calhoun's common-law wife accused him in 2013 of hitting her in the face and biting her head twice. He pleaded guilty and accepted a two-year deferred adjudication sentence.

His most recent conviction was in October 2015 when he pleaded guilty in Harris County to another charge of making a terroristic threat and was sentenced to 15 days in jail.