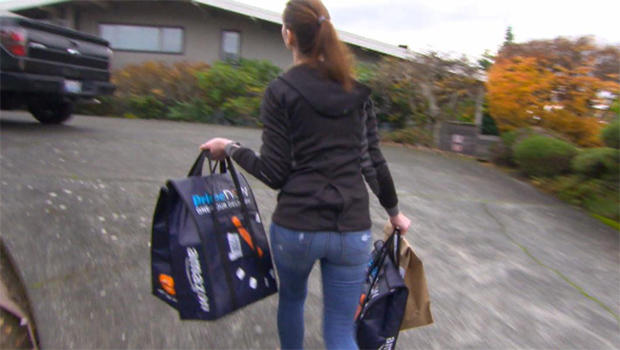 “We deliver” is the boast of online companies that bring food, of even entire meals, to your home. So could this make your local grocer a thing of the past? Our Cover Story is reported by Anna Werner:

Why go to the supermarket when it can come to you?

“My husband and I both will stay up late to watch TV after the baby’s in bed. And we think what ice cream we can order?” she laughed.

Her items come to her in just one hour.

“What it really is about is saving your time,” said Stephenie Landry, who heads up Prime Now. “There’s lots of people who don’t want to be in lines.”

Landry walked Werner through an Amazon facility (which she called “organized chaos”), where workers take those online orders and fill up brown paper bags for delivery. “We are usually carrying somewhere between 20,000 and 40,000 items,” Landry said. For larger orders, the company also offers Amazon Fresh, an online grocery store with even bigger warehouses.

And it’s not just Amazon: grocery chains (like Safeway and Whole Foods) and even Google are among at least 50 major outlets offering online delivery. Sales are up 15% from 2015, and could top $12 billion this year.

But the new shopping options aren’t limited to plain groceries. Meet the meal kit: Three dinners in a box for the week, complete with recipes, pictures, and precisely-measured ingredients, from the country’s largest kit seller, Blue Apron.

“It’s not a fad to cook at home,” he said. “And what we think we’re doing is just making cooking at home more affordable, more efficient, higher quality, and better for the environment than the way that people cook at home today, which is going to a grocery store.”

Want to cook like Martha Stewart? Well, she sells meal kits, too. So do Plated, Peach Dish and even The New York Times.

New York City mother of two Lucy Blatter gets hers from a company called Hello Fresh. “I think It’s just, for me, most about not having the time to go through all the aisles, and if I take my kids, that’s really stressful. Taking kids shopping is super-stressful. They ask for everything. And it just makes it simple and super-convenient.”

She gets three meals a week for about $60.

And she lives across the street from a grocery store.

So with all these new services, profits can’t be far behind, right? Not so fast, says retail analyst Kurt Jetta. He says the proliferation of online grocery services is a sign of what he calls the “Sheep Effect”:  “They’re just, ‘Well, they’re doin’ it, they’re doin’ it ...’ But, like, just stop and think: Is that right for you?”

For example, trying to buy a can of baked beans online: “At any one time, you’re getting six [on screen]. You can’t really tell the size, you don’t have a frame of reference.” Whereas in your grocery store, Jetta said, “I have it all. I just see it all at once. I’m usually familiar with the layout. I can just go and do it, and on to the next category.”

Plus, online shopping may save you time, but not money. Prices can be up to 25 percent higher -- and Jetta says data shows 90% of consumers still prefer the traditional grocery store.

Shopper Nancy Bailey is one of them: “I like, personally, being able to see the sales. I love going up and down the aisles and seeing the ones that I didn’t get to see. It just makes me feel good to see the products.”

Werner asked Jetta, “By trying to move this process out online, are they essentially solving a problem that doesn’t exist?”

“I would say they are. And they’re also shooting themselves in the foot. So they’re trying to invest in something [where] they make less money, and undermines a business that is successful and people are generally happy with.”

But don’t tell that to Amazon’s Stephenie Landry. “Because I see real solutions to people’s problems and lives today which are very busy, very hustle-bustle,” she said. “And I think that we’re providing a solution that makes people’s lives better.”

So maybe on a Thanksgiving to come, your cooking will be out of the box.

Definitely good enough to eat, but in the long run, will the recipe last?