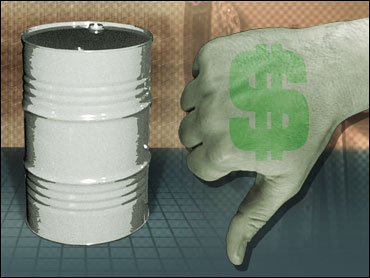 The Commerce Department reported that the imbalance between what America sells abroad and what it imports rose to $58.8 billion in June, an increase of 6.1 percent from the May deficit of $55.4 billion.

So far this year, the trade deficit is running at an annual rate of $686 billion, 11 percent higher than last year's all-time record of $617.6 billion. The trade performance has presented President George W. Bush with a political headache as critics have charged that the soaring imbalance represents the failure of the administration's free trade policies.

The June deficit came as U.S. exports of goods and services rose by $52 million to a record of $106.8 billion, reflecting higher sales of telecommunications equipment, aircraft engines and chemical fertilizers.

Imports, however, rose a much larger $3.44 billion to also set a record at $165.7 billion, reflecting an increase in both the price and volume of petroleum shipments and higher imports of toys, clothing and other consumer goods.

More than half of the trade deterioration in June reflected America's surging foreign oil bill, which hit a record high of $19.9 billion, an increase of 9.8 percent from the May level. Analysts say that figure will rise even higher in coming months, reflecting a continued surge in global oil prices, which set a new record of $66 per barrel on Thursday.

With bullish sentiment unabated and crude prices hitting five consecutive highs in just as many days this week, analysts expect front-month crude contracts to test the $70 a barrel threshold.

Drivers are likely to see the price of gas raise, and airlines are hiking fares to combat the rising oil prices. CBS' Stacy Tisdale reports that carriers including United, Delta, U.S. Airways and American will raise fares on domestic flights by $10 to $20 per round trip.

The average price of a barrel of imported crude oil jumped to $44.40 in June, the second highest monthly average for imports on record, exceeded only by a $44.76 average in April.

Much of the deterioration reflects a flood of clothing and textile shipments from China since Jan. 1, when global quotas expired. Responding to pleas of American textile manufacturers about job losses and plant closings, the administration has moved to re-impose quotas in several clothing categories.

The administration also announced on Thursday that it would begin negotiations next week aimed at reaching agreement with China on a comprehensive cap on Chinese clothing and textile imports.

Responding to rising protectionist pressures in Congress, the administration has also increased pressure on China to revalue its currency. The Chinese last month did announce a small 2.1 percent revaluation of the yuan but American manufacturers argue that the Chinese currency is undervalued by as much as 40 percent, giving China a huge competitive advantage over American products.

With the record trade deficits and the continued loss of jobs in manufacturing — declines that total 3 million since mid-2000 — the administration has found it harder to sell new free trade agreements in Congress.

Last month, Bush won passage of the Central American Free Trade Agreement by a slim two-vote majority in the House after a hard fought campaign in which critics contended that the trade deals were opening American workers to unfair competition from low wage countries.

The new trade report showed that America's deficit with Mexico hit a record high of $4.8 billion. Mexico and Canada are partners with the United States in the North American Free Trade Area.

The capsule containing the rock samples created a stunning fireball before landing in the Australian outback on Saturday.