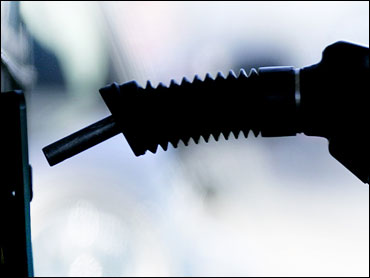 Crude oil prices remained in record territory after soaring to new highs Friday past $66 a barrel as reports of new U.S. refinery outages rekindled fears that gasoline supplies in the world's biggest consumer would struggle to meet rising demand.

The U.S. trade deficit increased sharply in June as surging oil prices pushed petroleum imports to an all-time high, the Commerce Department reported Friday — and that was when a barrel of oil was only an average of $44.40.

Irene's potential threat to land was still uncertain, as its path had shifted east, according to forecasters at the National Hurricane Center in Miami. Forecasters said the storm could strike the coast anywhere from South Carolina to New Jersey.

Along Northern California's scenic Highway 1, reports CBS News Correspondent John Blackstone, a gallon of premium gasoline costs more than $4 a gallon. $3 a gallon is common in San Francisco, and the effects are trickling down: Cab drivers in many cities now may add a fuel surcharge, airlines are adding as much as $20 a ticket to cover high fuel costs, and FedEx has increased its express delivery charges.

Analysts said gasoline demand, currently at its peak in the U.S. summer driving season, was pushing crude's gains. Last week, U.S. gasoline demand picked up by 1.4 percent from a year ago, according to government data.

It's the "law of supply and demand," truck stop owner Steve L'Ecluse told CBS News. "When you have more demand than you have supply, it's going to go higher."

"People fear there won't be enough gasoline at a time when it's so greatly demanded, so they're just buying, buying and buying," said Tetsu Emori, chief commodities strategist at Mitsui Bussan Futures in Tokyo.

Oil prices are almost 50 percent higher than a year ago, but they would need to surpass $90 a barrel to exceed the inflation-adjusted peak set in 1980.

"The refinery breakdowns are a big issue, they're happening at a time when gasoline supplies are already very tight," Emori said.

Among the latest refinery outages: several units at ConocoPhillips' 306,000 barrel-a-day Wood River, Ill., refinery were shut after a thunderstorm caused a power failure at the plant.

Also, BP PLC shut down a hydrogen recovery unit Aug. 10 at its massive 470,000 barrel-a-day Texas City refinery, following a decision by the company to keep high-pressure units off line until they can be proven safe, BP Spokesman Scott Dean said Thursday.

The three other high-pressure units at the refinery — the residual hydrotreater, the ultracracker and the gas oil hydrotreater — were already off line Wednesday and will be kept down pending investigations, Dean said.

The incidents are the latest in a string of outages to hit about a dozen U.S. refineries that together can process 2.7 million barrels a day of crude oil, some 16 percent of total U.S. refining capacity.

But so far those extra costs don't seem to be shrinking demand or slowing the economy.

"If you want significantly lower oil prices in the short run, the only sure way to do that is to have significantly weaker economic growth," said oil analyst Bill O'Grady of A.G. Edwards.