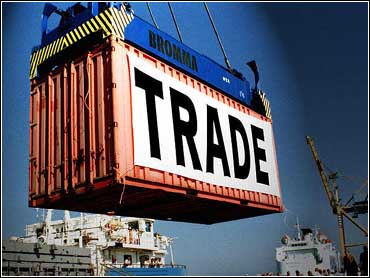 The U.S. trade deficit unexpectedly rose to an all-time high in October as oil shipments soared and the United States set deficit records with China, Europe, Canada and Mexico.

The Commerce Department reported that the gap between what America sells overseas and what it imports rose by 4.4 percent in October to $68.9 billion, surpassing the old record of $66 billion set in September.

So far this year, the trade deficit is running at an annual rate of $718 billion, far surpassing last year's $617.6 billion imbalance. Critics say the soaring deficit is evidence that President Bush's policy of pursuing free trade deals around the world is not working.

To counter the attacks, the administration has stepped up pressure on Europe and Japan to boost economic growth as a way of increasing demand for U.S. exports. It is also pressuring China on a number of trade issues, from textile imports to the country's currency, which American manufacturers say is being manipulated to give Chinese producers unfair trade advantages.

The deterioration of the deficit in October caught analysts by surprise. They had been forecasting that the imbalance would improve, reflecting a fall in global oil prices.

The average price per barrel of imported oil did decline slightly to $56.29, down from an average of $57.32 in September, but the volume of shipments shot up to 9.8 million barrels per day. The total bill for imports in October hit a record of $25.8 billion, up 7.8 percent from September.

A surge of Chinese shipments of televisions, toys and computers pushed America's deficit with China to a new monthly record of $20.5 billion. Through October, the deficit with China is running at an annual rate of $200 billion, far exceeding last year's imbalance of $162 billion, which had been the biggest deficit ever recorded with a single country.

On recent trips to China, both Bush and Treasury Secretary John Snow have lobbied Chinese officials to provide greater flexibility for their currency, the yuan, to find its proper value in relation to the U.S. dollar. American manufacturers contend that the Chinese are artificially depressing the yuan's value by as much as 40 percent as a way to make Chinese goods cheaper in relation to U.S. products.

While the Chinese did allow the yuan to rise by 2.1 percent this past summer, the currency has been essentially unchanged since that time.

The administration did reach an agreement recently to re-impose quotas on a wide range of clothing and textile products to stem what had been a flood of imports this year since global quotas were lifted last January. For October, imports of Chinese clothing and textiles declined by 10.9 percent from September but for the first 10 months of this year, Chinese imports are up by 47.6 percent compared to the same period in 2004.

Critics blame the soaring trade deficits for a loss of 3 million manufacturing jobs since mid-2000 and they argue that Bush's push to strike free trade agreements eliminating all trade barriers between the United States and other nations has opened American workers to unfair competition from low-wage countries.