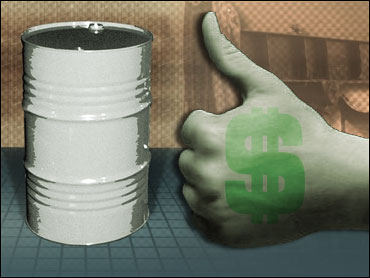 The trade deficit soared to a record in September as the Gulf Coast hurricanes helped push America's foreign oil bill to an all-time high. The politically sensitive deficit with China also set a record.

The Commerce Department reported Thursday that the deficit jumped to $66.1 billion in September, 11.2 percent higher than the $59.3 billion imbalance recorded in August. It was a far bigger increase than analysts had been expecting and reflected in part a record $23.8 billion in oil purchases as the price skyrocketed, reflecting widespread shutdowns of production facilities following hurricanes Katrina and Rita.

So far this year, the deficit is running at an annual rate of $706.4 billion. This puts the country on track to far surpass the old deficit record of $617.6 billion set last year and gives critics ammunition to argue that President Bush's trade policies are not working.

In other economic news, the government reported that the number of Americans who have lost their jobs because of the string of devastating Gulf Coast hurricanes rose to 542,000 last week. Last week's increase included 15,000 applications for jobless benefits related to Katrina and Rita and 6,000 attributed to Hurricane Wilma.

The 11.4 percent increase in the deficit reflected the fact that imports jumped by 2.4 percent to a record $171.3 billion in September, driven by the higher oil bill and a big increase in imports of consumer goods such as televisions, clothing and toys.

U.S. exports actually fell by 2.6 percent to $105.2 billion in September, the biggest monthly decline in four years. However, analysts cautioned that the drop-off was heavily influenced by a strike at aircraft-maker Boeing which sharply curtailed shipments of jetliners during the month.

The deficit with China jumped by 8.9 percent during the month to a record $20.1 billion and through September is running at an annual rate approaching $200 billion, far above last year's record deficit of $162 billion, which was the highest imbalance ever recorded with a single country.

The increase of 21,000 hurricane-related jobless claims came out of a total of 326,000 new applications for jobless benefits filed last week, an increase of 2,000 from the previous week. That was a worse-than-expected showing. Analysts had been expecting overall claims to decline last week.

The soaring deficit with China has increased calls in Congress for the administration to take action against what critics complain are China's unfair trade practices such as manipulating its currency to gain trade advantages, rampant piracy of American movies and other copyrighted material and state support to the country's textile industry.

On Tuesday, the administration announced that it had reached a three-year agreement with China to limit imports of clothing and textiles, something that the U.S. industry said was desperately needed to halt a surge that began in early January and has already cost thousands of American textile jobs.

The figures for September showed that a series of "safeguard" quotas that the administration has been imposing on various categories of Chinese imports had resulted in a 5.2 percent drop in imports of Chinese clothing and textiles in September, when compared to August. However, these shipments were still up by 50.4 percent for the first nine months of this year, reflecting the surge that had occurred in earlier months before the quotas were imposed.

U.S. purchases of foreign oil rose by 4.4 percent in September with the average price for a barrel of imported crude oil hitting an all-time high of $57.32, up from a $52.65 per barrel average in August.

After Katrina struck, crude oil prices briefly topped $70 per barrel, sending gasoline pump prices over $3 per gallon for a time. However, as Gulf Coast production has come back on line, those prices have moderated although they are still well above levels of a year ago.

The increase in petroleum imports reflected a jump in price. The volume of shipments fell by 9.2 percent during the month, reflecting in part port shutdowns along the Gulf Coast because of the hurricanes.