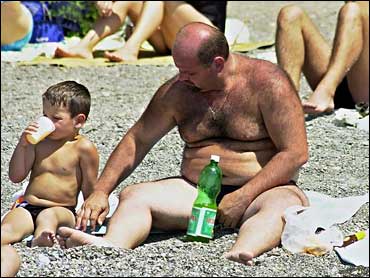 From the seemingly slim to the truly chubby, all children should have their body-mass index measures evaluated yearly as part of efforts to identify and prevent obesity, the American Academy of Pediatrics says.

Prompted by worrisome data on the prevalence of obesity and obesity-related disorders in children, the academy has developed its first-ever policy statement dealing solely with identifying and preventing the problem.

It's been suggested that obesity-related health costs "may outstrip the costs of cigarette smoking, so I don't think we have a choice but to find ways to deal with it," said Dr. Marc Jacobson, a pediatrician at New York City's Schneider's Children's Hospital and co-author of the new policy. "It's not just pediatricians who can solve this, it's going to be the whole society."

While most pediatricians already track children's height and weight, the new policy asks doctors to keep obesity prevention in mind as they're doing so and to specifically measure body-mass index, a height-to-weight ratio. This will help them spot unusually rapid growth that might signal an increased risk of obesity, Jacobson said.

In adults, a BMI of 30 or higher is considered obese but in youngsters the index depends on gender and age.

Recent data indicate that about 15 percent of U.S. youngsters aged 6 through 19 are severely overweight or obese based on their body-mass index, or BMI - a doubling of the rate over the past two decades. Studies also have shown increasing rates in children of obesity-related diseases including adult-onset diabetes.

In addition to yearly BMI checks, the new policy encourages pediatricians to: