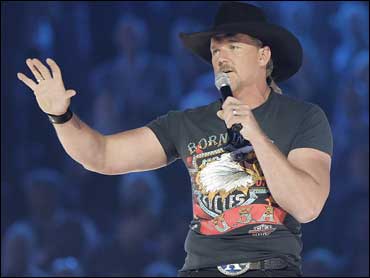 Trace Adkins, a former oil roughneck, has written and recorded a song called "Black Gold" that will open an upcoming truTV series of the same name.

The show, which premieres at 10 p.m. EDT June 18, follows three drilling crews in their quest for oil in West Texas.

Before he was a country star, Adkins, 46, of Sarepta, La., worked as a roughneck and derrickman on offshore drilling rigs in the Gulf of Mexico.

"Trace knows that the men featured in "Black Gold" are drilling for oil on our soil, an important but dangerous job, where loss of life or limb is not uncommon. His understanding of these men and what they face really comes through in his lyrics," said Marc Juris, executive vice president and general manager of truTV.

Adkins has kept a high-profile in recent months. He was runner-up on NBC's "Celebrity Apprentice," appeared in CBS' "The Young and the Restless" and won best male video for "I Got My Game On" at the Country Music Television awards.

The singer's other hits include "You're Gonna Miss This," "Honky-tonk Badonkadonk" and "Ladies Love Country Boys."