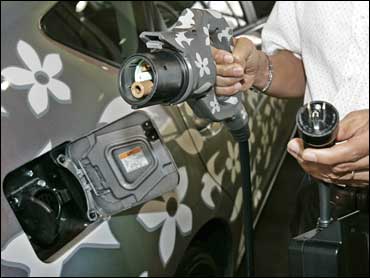 Toyota Motor Corp. said Wednesday it has developed a plug-in hybrid vehicle for public road tests in Japan and plans tests for the U.S. and Europe.

Plug-in hybrids, whose batteries can be recharged via a standard wall outlet, are also being developed by other major automakers like U.S.-based General Motors Corp. and Ford Motor Co.

Like most hybrids now on sale, which are powered by electric motors and gasoline engines, the new model — called Toyota Plug-in HV — also gets recharged by converting energy from braking and when the wheels spin.

But the advantage of the plug-in variety is that it runs longer on electricity than regular hybrids. Electric cars use no gas and emit no pollution.

Toyota is the first manufacturer to receive government approval to conduct tests for a plug-in hybrid on Japanese public roads, it said, and will collect information about the tests from eight plug-in vehicles for the government about emissions and fuel efficiency.

Masatami Takimoto, the Toyota executive in charge of technology, declined to say when Toyota will bring a plug-in hybrid to market. Innovation in battery technology is needed, he said.

"We still need some time," he said.

The Plug-in HV displayed Wednesday runs on the same nickel metal hydride battery as the Prius and has a cruising range of 8 miles on just electricity. Takimoto said tests will help in deciding the range consumers want.

The maximum speed of Plug-in HV is 62 mph as an electric vehicle. The batteries require about 1.5 hours to recharge at 200 volts and three or four hours at 100 volts, and the company recommends recharging overnight when power costs are cheaper in Japan.

In a short test-ride for reporters after the news conference, the vehicle zoomed along a course as a quiet electric car as long as the driver didn't accelerate too quickly. But when the driver suddenly stepped on the gas pedal, the car effortlessly switched on its gas engine to keep the ride going smoothly.

The more common hybrids such as Toyota's Prius have a cruising range of just 1.9 miles as an electric vehicle, according to Toyota.

Mass production of plug-ins is so far being held back by costs and battery technology that limit the vehicles' range. Manufacturers are racing to bring the technology to market as consumers seek alternatives to traditional engines and high gasoline prices.

Masanao Ozaki, an expert who writes about energy and the environment, said it is still unclear which automaker may be ahead in plug-in hybrids, and the range for Toyota's plug-in was too short to be a practical option.

"The regular hybrid may even be better for the environment," he said in a telephone interview. "The advantage of a plug-in hybrid is that it uses electricity from homes through a regular outlet. But utilities companies predominantly use fossil fuels to produce electricity for homes."

Toyota, which introduced the Prius in 1997, has the advantage of 10 years of experience in selling hybrid technology.

It now dominates the hybrid market, with several other hybrid models, including the hybrid Camry and hybrid Lexus models. It has set a target of selling a million hybrids a year sometime after 2010.

Toyota said in June its cumulative sales of hybrids passed 1 million vehicles, a landmark for the automaker.

Details of its plug-in hybrid tests for the U.S. and Europe are still undecided, Takimoto said.

General Motors is developing the Chevrolet Volt plug-in hybrid, and says it hopes its plug-ins can reach showrooms by 2010.

Earlier this month, Ford announced a partnership with Southern California Edison to test rechargeable hybrid vehicles and hasten mass production of plug-in hybrids. Ford has been testing plug-in hybrids based on the Escape sport-utility vehicle, for one, but has not said when it plans to start mass producing them.