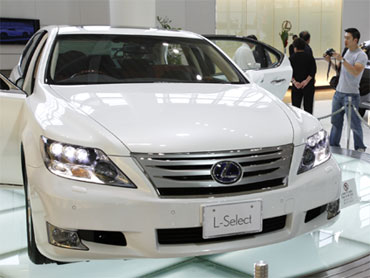 Toyota Motor Corp. said Friday it is recalling about 3,800 Lexus LS sedans in the U.S. to fix a problem with the vehicle's steering system following a similar recall in Japan.

The company said the recall affects some 2009 and 2010 LS 460 and LS 600h sedans. The recall is designed to fix a problem in which the steering wheel becomes off-center after a specific driving maneuver. The problem should not occur during normal driving, the company said.

Toyota earlier Friday recalled 4,500 of the same models in Japan to address the steering issue. The recall affects roughly 2,750 vehicles elsewhere around the world.

The automaker has been working to react faster to problems after coming under government scrutiny and being slapped with a record $16.4 million U.S. fine for its slow response to its accelerator pedal recalls. It is also facing hundreds of state and federal lawsuits. Those recalls affected more than 8 million vehicles worldwide.

On Thursday, lawmakers in the U.S House of Representatives accused Toyota of failing to keep its promise to get to the bottom of what caused unintended acceleration in some of its vehicles. Jim Lentz, Toyota's top U.S. sales executive, told lawmakers that the company has no evidence that electronics are to blame for the sudden acceleration reports.

Toyota's safety concerns have triggered to the first major review of U.S. auto safety laws in Congress since the large tire recalls by Bridgestone/Firestone Inc. in 2000.

On models affected by its latest recall, Toyota said the steering wheel can briefly become out of alignment with the car's wheels when the steering wheel is turned to the extreme right or left and then re-centered. Toyota will remedy the problem by replacing the computer processor in the vehicle's variable gear ratio steering system, Toyota spokesman John Hanson said.

Lexus dealers will be contacting owners to set up appointments to have the repair performed, Toyota said. The company has received 12 complaints of the problem in Japan, but said it knew of no accidents caused by the problem either in the U.S. or Japan.

Toyota has sold about 4,000 LS sedans in the U.S. so far this year, accounting for about 6 percent of all Lexus sales.