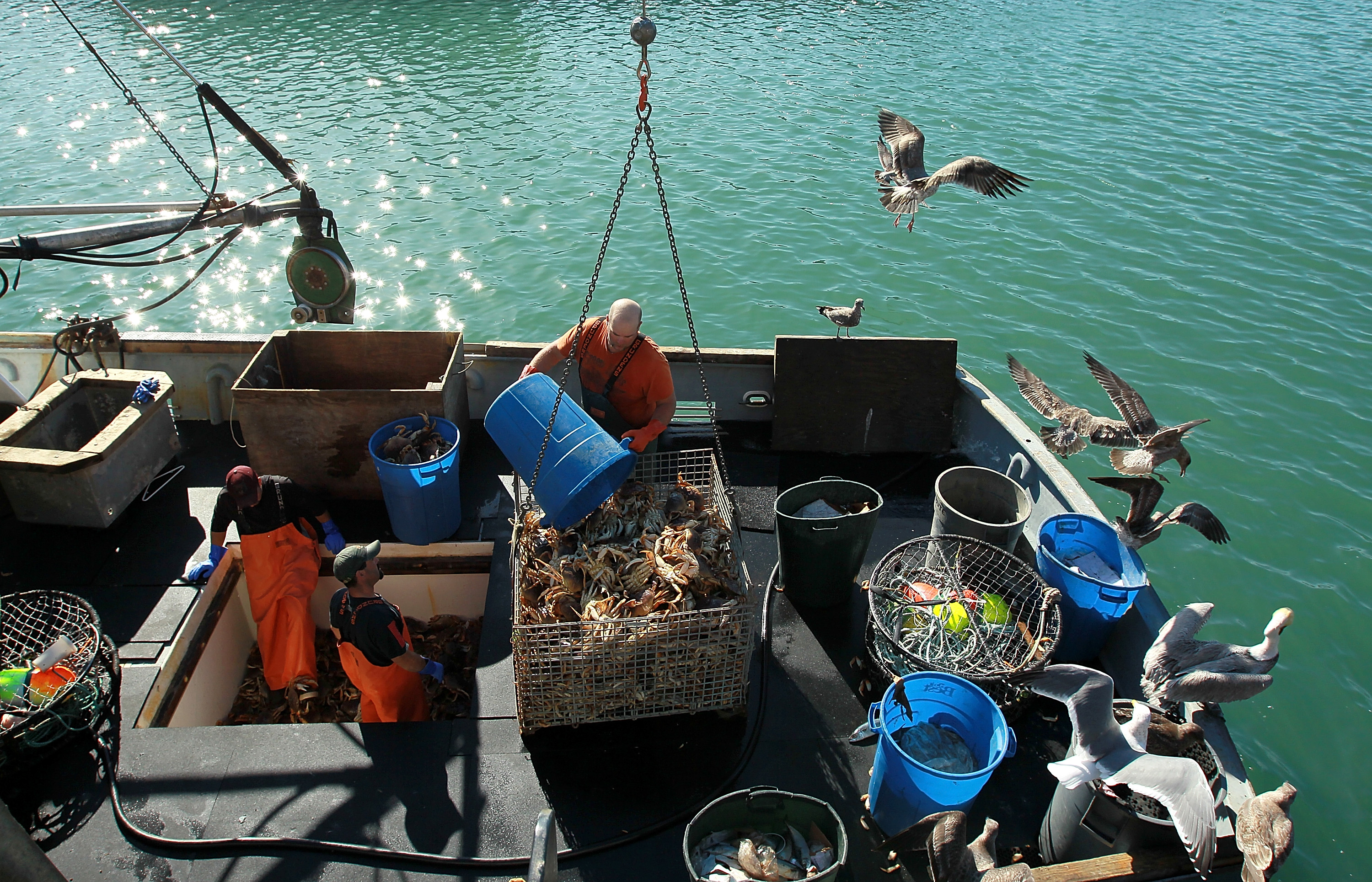 A vast bloom of toxic algae off the West Coast is denser, more widespread and deeper than scientists feared even weeks ago, according to surveyors aboard a National Oceanic and Atmospheric Administration research vessel.

This coastal ribbon of microscopic algae, up to 40 miles wide and 650 feet deep in places, is flourishing amid unusually warm Pacific Ocean temperatures. It now stretches from at least California to Alaska and has shut down lucrative fisheries. Shellfish managers on Tuesday doubled the area off Washington's coast that is closed to Dungeness crab fishing, after finding elevated levels of marine toxins in tested crab meat.

So-called "red tides" are cyclical and have happened many times before, but ocean researchers say this one is much larger and persisting much longer, with higher levels of neurotoxins bringing severe consequences for the Pacific seafood industry, coastal tourism and marine ecosystems.

Dan Ayres, coastal shellfish manager for the Washington Department of Fish and Wildlife, said the area now closed to crab fishing includes more than half the state's 157-mile-long coast, and likely will bring a premature end to this year's coastal crab season.

"We think it's just sitting and lingering out there," said Anthony Odell, a University of Washington research analyst who is part of a NOAA-led team surveying the harmful algae bloom, which was first detected in May. "It's farther offshore, but it's still there."

The survey data should provide a clearer picture of what is causing the bloom which is brownish in color, unlike the blue and green algae found in polluted freshwater lakes. Marine detectives already have a suspect: a large patch of water running as much as 3 degrees centigrade warmer than normal in the northeast Pacific Ocean, nicknamed "the blob."

"The question on everyone's mind is whether this is related to global climate change. The simple answer is that it could be, but at this point it's hard to separate the variations in these cycles," said Donald Boesch, professor of marine science at the University of Maryland who is not involved in the survey. "Maybe the cycles are more extreme in the changing climate."

Odell recently completed the first leg of the survey, mostly in California waters. On Wednesday, researchers plan to continue monitoring the sea between Newport, Oregon, and Seattle. The vessel will then go to Vancouver Island, wrapping up in early September. Another research ship is taking samples off Alaska.

The brownish bloom was particularly thick off the coast of Santa Barbara, California, and Odell said it was unusually dominated by one type of algae called Pseudo-nitzschia, which can produce the neurotoxin domoic acid.

"It's an indication of an imbalance," said Vera Trainer, a research oceanographer with the Northwest Fisheries Science Center in Seattle. "Too much of any one thing is not healthy for anybody to eat."

Trainer said this bloom is the worst she's seen in 20 years of studying them. Harmful algal blooms have usually been limited to one area of the ocean or another, and have disappeared after a few weeks. This one has grown for months, waxing and waning but never going away.

"It's been incredibly thick, almost all the same organism. Looks like a layer of hay," said Raphael Kudela, a professor of ocean sciences at University of California, Santa Cruz.

Kudela told CBS News in June, "It's definitely the largest bloom of this particular algae seen on the West Coast, possibly anywhere, ever."

The current bloom also involves some of the highest concentrations of domoic acid yet observed in Monterey Bay and other areas of the West Coast.

In May, ocean researchers from the Monterey Bay Aquarium Research Institute (MBARI) measured concentrations in the bay and found they were 10 to 30 times higher than even the high end of a typical Pseudo-nitzschia bloom.

"It's really working its way into the food web and we're definitely seeing the impacts of that," Kudela said, noting that sea lions are getting sick and pelicans are being exposed. And now that the Pacific is experiencing its periodic ocean warming known as El Nino, it may come back even stronger next year, he said.

Domoic acid is harmful to people, fish and marine life. It accumulates in anchovies, sardines and other small fish as well as shellfish that eat the algae. Marine mammals and fish-eating birds in turn can get sick from eating the contaminated fish. In people, it can trigger amnesic shellfish poisoning, which can cause permanent loss of short-term memory in severe cases.

Each year California imposes a six-month moratorium on recreational shellfish harvesting from May through October, when the chance of toxic poisoning is highest, and enforces strict testing of hauls from commercial fisheries.

State health officials stress that seafood bought in stores is still safe to eat because it is regularly tested. While there have been no reports of human illnesses linked to this year's bloom, authorities aren't taking chances in fisheries with dangerous toxin levels.

California public health officials have warned against eating recreationally harvested mussels and claims, or any anchovy, sardines or crabs caught in waters off Monterey, Santa Cruz and Santa Barbara counties. Other shellfish harvests are shut down along Oregon's coast.

The most recent samples showed the highest-ever recorded concentrations of domoic acid in the internal organs of Dungeness crab, Ayres said.

"This is really unprecedented territory for us," said Ayres.

Culture etched in our DNA more than previously known