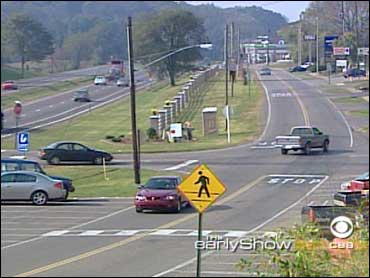 That letter was deemed a winner, and Dave Price

paid a visit (video)
as The Early Show continued its "Tour My Town" series.

"It's the kind of place," Gabriel's letter continued, "where you can still leave the house unlocked and get the local gossip at the one-chair barber shop."

Barber D.K. Crawford agreed, telling Price, "Mount Carmel's one of these towns where it's a good place to raise kids."

"Most people know each other," local businessman Skip Smith says, "or they know somebody who knows that person that you don't know."

"There's not a lot that goes on here, and we like it. We like that," Mayor Gary Lawson observes.

Price says Lawson loves his town so much, he runs it for pretty much nothing — $50 a month, and he only gets that if he attends the aldermen meeting.

"Yep," Price says, "this place isn't like any other. But the main reason we came here? This is a town built entirely on one side of a road."

"Mount Carmel is just a nice American small town, all on one side of the road," says Smith, the businessman.

"Somewhere along the line, we never developed," says Crawford, the barber. "I mean, we're all on one side of the road!"

"It's all on one side of the road," Gabriel, the letter-writer, chimed in.

"So you know the riddle, why didn't the people cross the road?" Price asks. "Well, in Mt. Carmel's case, some of them did. They're just not doing a lot right now. You see, after 1966, when they expanded the main highway running past the city, it left all of the living townspeople on one side."

A cemetery was on the other.

"During World War II," Mayor Lawson explained, "they built a huge Army ammunition plant on the other side of the road. And they actually confiscated all that land, or the government took it."

Because the government stills owns and leases the land on the other side, Price says, it's off-limits to Mount Carmel.

But the mayor is working to get some of it back.

"I annexed the graveyard. Before that, it wasn't inside the city limits of Mount Carmel."

"Hold on a second," Price says. "The first thing you annexed on the other side of the road is the graveyard? There's not a great tax base there."

There's something else about the highway, Price points out. It's not only the town's most unusual feature, it's also its deadliest. The stretch going by Mount Carmel was once known as "Bloody 11W" because of the number of traffic fatalities.

"And we have a two-mile stretch of it that has no red lights and, with six or seven intersections, it just, it's a deadly combination," laments Police Chief Jeff Jackson.

But the little town has big ideas, Price says. They might have only eight police officers, but that was enough to try something a bit unusual: a "Fatal Vision" exercise.

Townsfolk are taken in a golf cart on a short track between curving lines of traffic cones. Then they put on goggles that give the illusion of a blood alcohol limit of .25.

Price tried it and did fine without the goggles but knocked over several cones when they were on. "Those could have been people," he says.

That and other programs are working, Price says. There hasn't been a fatality on that stretch of 11W in the past three years. And Mount Carmel's police department even won a national award.

The city's next challenge? Expansion — across the highway.

"Hopefully," says Lawson, "we'll get some type of retail development. If we don't, sooner or later, it's gonna catch up with us."

"Some people," Price says, "dream about going over the rainbow; others, just to the other side of the road. Folks say they'll stay in Mount Carmel, either way, until their time is up."

"I couldn't think about livin' anywhere else," barber Crawford says.

"It's like finding the girl you're gonna marry. You just know when it's right," says Jackson, the police chief.

Every year, the entire town of Mount Carmel, all 5,000 or so residents, comes out for a massive block party that attracts over 15,000 people from neighboring communities.