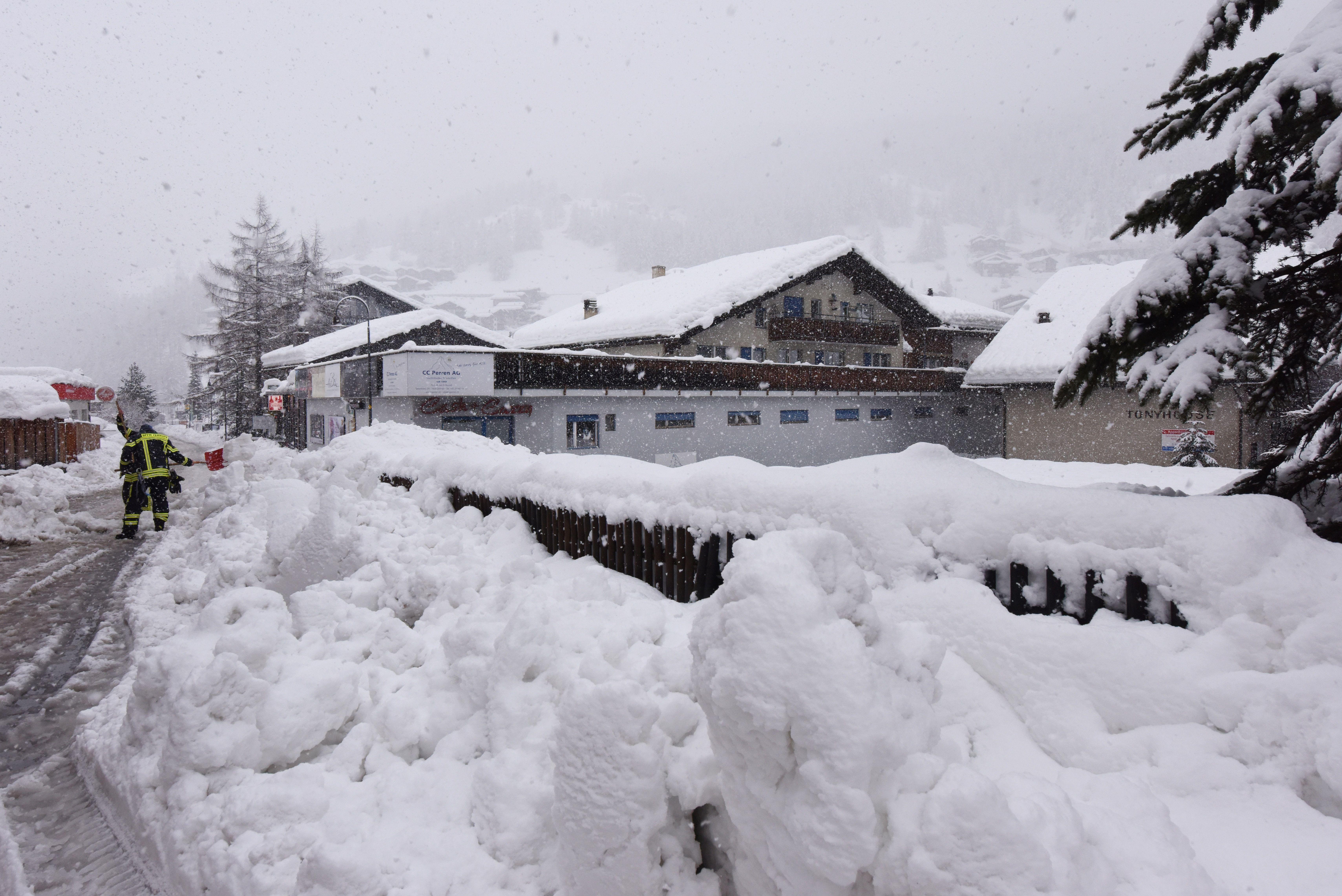 GENEVA - Unusually heavy snowfall and a high risk of Alpine avalanches stranded some 13,000 tourists Tuesday in the Swiss resort of Zermatt at the base of the famed Matterhorn mountain. With nearby roads, trains, cable cars, ski slopes and hiking trails into the town closed, Swiss authorities deployed helicopters to ferry some tourists to a nearby village to escape the snow-bound Alpine valley.

A police official in Zermatt, a tourist magnet for backpackers and millionaires alike, said the helicopter journey to the village of Taesch takes around three minutes.

The official, who spoke on condition of anonymity because he was not authorized to speak publicly about the matter, said the so-called air bridge can transport about 100 people an hour, conditions permitting.

Only tourists who requested the air bridge were being ferried out, the official said, insisting that it was not an official evacuation.

Swiss state-backed broadcaster SRF showed images of several people wheeling their luggage out to three helicopters, with their blades whirring atop an icy plateau.

Bulldozers were plowing through the snowdrifts in Zermatt so that streets could be salted. One local hotelier said authorities were setting off controlled explosions to help clear away the piled-up snow that had coated roads and rails.

Janine Imesch of the Zermatt tourism office said power has been restored after a temporary outage. She said no people were at risk because authorities had shut down access to the nearby ski slopes and hiking trails a day earlier.

"There is nothing to panic about, everything is fine," she said Tuesday by phone. "Only the ski areas are closed. In the village, the atmosphere is relaxed."

Romy Biner, the head of the Zermatt town council, told SRF the airlift was for guests who urgently needed to leave and to bring in supplies. She said the town hadn't seen so much snow for several years.

"It surprised us a bit this year and we're trying to make the best of it," Biner said.

Switzerland's WSL Institute for Snow and Avalanche Research said Tuesday afternoon that at least 80 centimeters (31.5 inches) of snow had dropped on the Zermatt area over the last 24 hours, raising the avalanche risk to a maximum level of five on an avalanche-warning scale.

The intense snowfall in the Zermatt and Saas valleys was part of a broader weather pattern that was causing mudslides and intensifying the avalanche risk across a broad swath of southwestern Switzerland.

In some more remote areas, the snowfall topped 1 meter (39 inches) over 24 hours, the institute said.

The WSL Institute pointed to "mid-range and large spontaneous avalanches" in the area with the risk of more avalanches increasing. It said the snowpack below 2,000 meters (6,500 feet) of altitude was weakened by heavy rains.