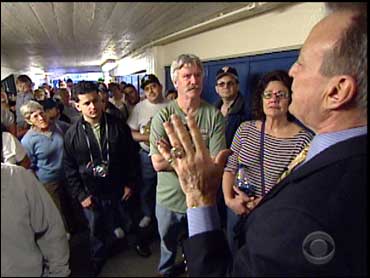 It is in its 86th-and final season, and the memorable moments that happened at Yankee Stadium stretch back - literally - to its very first day, when Babe Ruth, in the very first game in the new ballpark, homered to win the game. That started the 1923 season that would end with the Yankees' first of 26 world championships, CBS News correspondent Jeff Greenfield repots.

You might know that if you're a student of the game. Tony Morante knows more - a lot more.

Is it true that Negro League great Josh Gibson was the only man ever to hit a fair ball completely out of the park?

"Josh's ball did not in fact go out of Yankee Stadium. As a matter of fact, it was right over there," Morante pointed out a spot for Greenfield.

For anyone who is a baseball fan, time at a ballpark yields memories. But for one man, memories of this ballpark are his work -- and much of his life.

Morante is as close as anyone comes to being the official historian of Yankee Stadium. He came up with the idea of stadium tours, where school kids get chance to visit the dugout, the clubhouse and Monument Park, where the Yankee greats are honored in a manner befitting fallen military heroes in the House that Ruth built.

Morante's history with the ballpark goes back 59 years, when his dad, an usher, brought him there for the first time.

"I can't even remember the game as much as I remember the beer and the hot dogs; the grass and the blue sky," Morante said. "That was the first one, and I was smitten."

He's worked here ever since, full time for the last 35 years, through the ecstasy -- Reggie Jackson's three home runs in one game that won the 1977 World Series -- and the agonies -- the collapse at the hands of the Boston Red Sox in 2004.

And he talks of events that stretch back beyond his memory: A dying Lou Gehrig bidding farewell to the fans; Joe Louis knocking out Max Schmelling, Germany's symbol of Aryan supremacy in the first round; and an overtime NFL championship battle in 1958 between the Giants and the Baltimore Colts, often called "the greatest football game ever played.

Come next season, Tony will be working across the street, in the new Yankee Stadium

And the memories? They'll be moving, too.