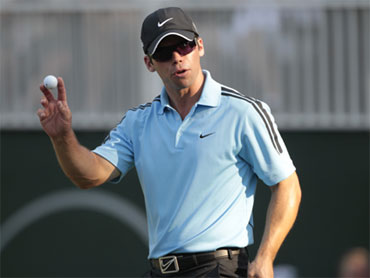 Paul Casey won't be going to the Ryder Cup. He wouldn't mind a $10 million consolation.

Casey was the only player among the top five in the FedEx Cup standings to break par Thursday, running off three straight birdies around the turn at East Lake for a 4-under 66 and a share of the lead with Geoff Ogilvy and Luke Donald in the Tour Championship.

It was the seventh time Casey has shot in the 60s in the nine rounds since European captain Colin Montgomerie left him off the Ryder Cup team. Whether that's motivating him to play well, the Englishman isn't saying.

A different kind of cup does have his attention.

At stake in this playoff finale is a $10 million bonus to the FedEx Cup champion. The top five in the standings — Casey got to No. 5 with his runner-up finish two weeks ago at Cog Hill — can claim golf's biggest payoff by winning, no matter what anyone else does.

"I've got an opportunity to accomplish one of the goals which I set for myself at the beginning of the year," Casey said. "I'm just trying to put myself in that position to win and then tick off that goal, which would be a huge goal. I'm not getting wrapped up in any sort of extra motivation. I don't need extra motivation. I'm motivated enough."

Breaking par was hard work on a difficult course in steamy conditions. The fairways are fast and more narrow than ever, and only nine players in the 30-man field broke 70.

One of them was defending champion Phil Mickelson, who has an outside chance to win the FedEx Cup and a better chance to replace Tiger Woods at No. 1 in the world. Woods did not qualify for the Tour Championship for the first time in his career.

Mickelson had two eagles in a span of four holes, including a shot he holed from the fairway on No. 12. Not so good was making bogey after both eagles, along with consecutive bogeys after his first birdie of the tournament. He shot 69, not a bad start.

"It's a better position than I started last year," said Mickelson, who opened with a 73 and went on to a three-shot victory. "Could have been better, could have been worse, and it was an interesting day."

Jim Furyk had a 67, while K.J. Choi was at 68. The group at 69 included Hunter Mahan, Jason Day, Kevin Na and Mickelson.

Matt Kuchar, the top seed in the FedEx Cup whose golfing career is rooted in Atlanta, chipped in for eagle on the 15th hole. That wasn't enough to offset for four bogeys in his round of 72, including a tee shot into the stands on the par-3 18th.

Dustin Johnson, the No. 2 seed, struggled off the tee on his way to a 74, while Steve Stricker (No. 4) also had a 74. Charley Hoffman, part of the top five from his victory at the TPC Boston, had a 71.

It only helps Casey and his bid to win the FedEx Cup when the four players ahead of him are behind him on the leaderboard, and he took notice of that when he glanced at video screens around East Lake.

"The big screens they have out there never go past the top 20, and I wasn't seeing anybody in the top five (in FedEx Cup standings) in that top 20," Casey said. "There is a very long way to go, though."

And he has enough company under par to remind him of that. Donald, who had a runner-up finish at the Deutsche Bank Championship to get to No. 7 in the standings, had six birdies in his round of 66.

Donald was among the three captain's picks for Europe and is hopeful of building some momentum, along with the winning the tournament, before heading over to Celtic Manor in Wales.

It was awkward for Donald when Casey was left off the Ryder Cup team for the first time since 2002, particularly because Donald's brother in Casey's caddie. Still, he didn't see a correlation in Casey's recent form to any Ryder Cup snub.

Even though Casey hasn't won a tournament this year, he is No. 7 in the world ranking. That wasn't an accident.

"You expect him to play well," Donald said.

The best news for Ogilvy, an Australian, is that he's starting to expect himself to play well. Ogilvy has not won since the season-opening SBS Championship at Kapalua, and he didn't so much as contend until the TPC Boston. That helped him get to the Tour Championship, even entertain thoughts of winning the FedEx Cup as the No. 12 seed.

"You can't come out and say, 'Hey guys, I'm going to play well in the next few weeks,' because it doesn't quite work like that," Ogilvy said. "But I think I get a pretty good feel for when it's coming around. But I don't know why."

So does he feel his game coming around? Ogilvy smiled.