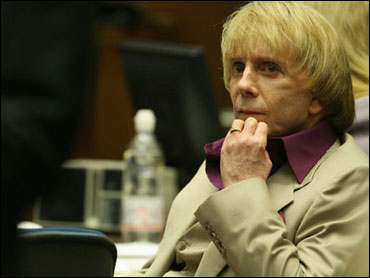 Phil Spector's murder trial finally brought the jury to the moment of actress Lana Clarkson's death when his driver calmly testified that he heard a "pow" as he waited outside the record producer's mansion.

Spector then stepped out of his home with a gun in his hand and said, "I think I killed somebody," the driver, Adriano De Souza, told the jury Tuesday.

De Souza said, when he asked what happened, Spector shrugged and De Souza then looked past him into the foyer.

"I saw the legs of the lady," the driver said. "I stepped inside and I saw the blood on her face."

De Souza said he drove Spector around on a night on the town in which Spector persuaded Clarkson to come home with him. The driver said he then waited in a car for two hours outside the suburban "castle" until about 5 a.m., when he heard the sound and saw the producer.

Standing up in the witness box, De Souza showed how Spector held the pistol in his right hand against his body.

"I saw a little bit of blood on this finger," the witness said, extending his right index finger.

Clarkson died immediately from a bullet fired from a gun inside her mouth. The defense claims she killed herself.

De Souza was to continue testifying Wednesday. The defense was expected to contend through cross-examination that De Souza had been napping and didn't actually understand what Spector said to him.

De Souza spoke in accented English and was asked several times by prosecutor Alan Jackson whether he had been able to fully understand Spector. The Brazilian-born driver said he had no problem understanding him.

Earlier, witnesses told how Spector ordered a series of drinks during the night on the town that began on the evening of Feb. 2, 2003, and ended in the early hours of Feb. 3. He met Clarkson at the House of Blues on the Sunset Strip, where she was a hostess guarding the entrance to a VIP room.

De Souza described how Spector had gone out with several women that night and made stops at four restaurants and bars. He testified that Spector eventually smelled of alcohol and appeared drunk.

Correspondent Hughes points out that prosecutors have already put on several female witnesses who testified that, when drunk, Spector had pulled out guns and threatened them. The prosecutors are trying to prove Clarkson's death fits Spector's pattern of behavior.

Spector rose to fame in the 1960s and '70s, changing rock music with what became known as the "Wall of Sound" recording technique. Clarkson was best known for a role in the 1985 film "Barbarian Queen."