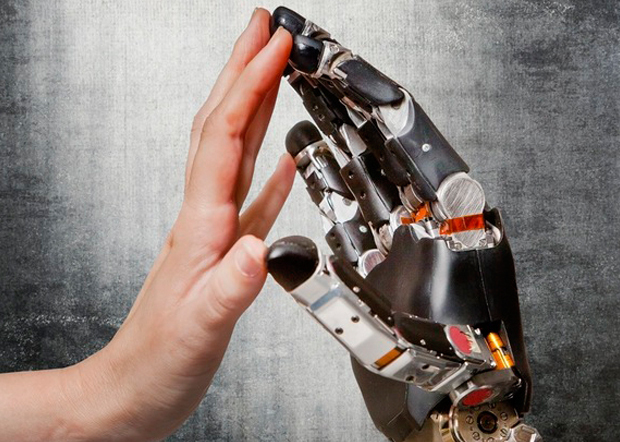 People with artificial limbs could one day have their sensation of touch restored through electrical stimulation of the brain, new experiments in monkeys reveal.

This research could help improve the dexterity of robotic prosthetic limbs, investigators added.

Recent advances in brain-machine interfaces have allowed people to control robotic limbs using their minds. However, scientists would like the prosthetics to restore more than just movement to patients -- they want to help restore the sensation of touch as well. [Octopus Arm to Bionic Eyes: The 5 Strangest Prosthetic Limbs]

"Our ability to grasp and manipulate objects relies critically on touch signals from the hand," said study author Sliman Bensmaia, a neuroscientist at the University of Chicago. "Without these signals, we would have trouble performing even the most basic activities of daily living, like tying our shoes or even turning a doorknob. Furthermore, touch is critical for emotional communication -- we touch the people we care about. Finally, touch is very important in embodiment, in making our body feel like part of us."

To advance toward touch-sensitive prosthetics for people, Bensmaia and his colleagues experimented with rhesus monkeys, whose sensory systems closely resemble those of humans. They identified patterns of brain activity that occur when the animals manipulate objects and successfully triggered these patterns artificially through direct electrical stimulation of their brains.

The first experiment focused on the monkeys sensing where they were touched on their skin. This research involved experiments integrating many pieces of sophisticated apparatus together, such as arrays of electrodes implanted in monkey brains and systems to collect data from more than 100 electrodes.

The animals were trained to identify several patterns of pokes on their fingers. "For example, we might poke the index finger, then the pinkie of the left hand," Bensmaia explained.

The researchers then connected electrodes to areas of the brain corresponding to each finger and replaced some of these pokes with electrical stimuli delivered to the appropriate areas of the brain. The animals responded the same way to artificial stimulation as they did to the real pokes -- for instance, if their left hand faced palm up and they were poked on the index finger and then on the pinkie finger, they would have glanced right, and they behaved the same way under electrical stimulation of their brain.

"In the brain, light touches produce small, highly localized patterns of activation; stronger touches activate more neurons," Bensmaia said. "One way to activate more neurons through electrical stimulation is to increase the current, so we investigated this approach to convey information about contact pressure."

The monkeys again responded in the same way to stimuli felt through their fingers and through artificial means -- they glanced left or right depending on whether the first of two touches exerted more or less pressure than the second, respectively. Determining the amount of pressure one exerts on objects is important "because you need to apply enough pressure on the object so as to not drop it, but not so much that you crush it," Bensmaia said.

Finally, Bensmaia and his colleagues investigated what happens when the monkeys first touch or release an object -- doing so generates a short but strong burst of activity in the brain. Again, the researchers found these bursts of brain activity associated with the monkeys touching or releasing objects could be mimicked through electrical stimulation.

The scientists now essentially have a set of instructions they can incorporate into robotic prosthetic arms to generate the basic sensation of touch in the brain. Initially, Bensmaia said he was "very skeptical" this endeavor would succeed. [5 Crazy Technologies That Are Revolutionizing Biotech]

"Given how complex the brain is, and how blunt an instrument electrical stimulation is, I thought the approach was doomed to failure," Bensmaia said.

Future experiments will aim for even more complex aspects of the sense of touch.

"In our experiments to date, we focused on the most basic information for object manipulation -- information about contact location, contact pressure and contact timing," Bensmaia said. "Of course, we obtain a lot more information than that from our sense of touch. We get information about object shape, size and texture; we can feel when something is moving across our skin or slipping from our grasp."

The researchers also hope experiments with humans are forthcoming from other labs.

"The advantage of doing human work is that you can ask the patient directly what they feel," Bensmaia said. "In our experiments, we had to infer what the monkeys felt from their performance."

Although Bensmaia said the researchers' work laid the groundwork for human tests, he cautioned prosthetics that restore the sensation of touch are likely not going to be available to patients for years.

The scientists detailed their findings online Oct. 15 in the journal Proceedings of the National Academy of Sciences.

Science Fact or Fiction? The Plausibility of 10 Sci-Fi Concepts