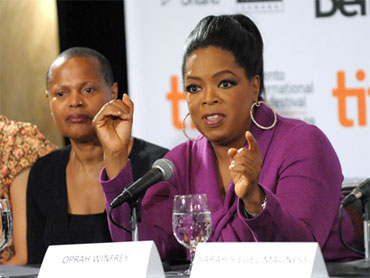 Hollywood's power-hitters were out in full force this week at one of the movie industry's most important events of the year, where the fan favorite can mean Oscar gold.

Cameras flashed and champagne flowed as a Who's Who of movies arrived at the Toronto International Film Festival.

"I'm just so thrilled to be here," said Drew Barrymore, whose directorial debut, "Whip It," is playing here. "Wait until you see the rest of the cast!"

And while it glows with the star power of Sundance and the foreign flare of Cannes, this is staged in Canada.

"Everybody knows that coming through this festival means a great deal," said director Tyler Perry ("I Can Do Bad All by Myself").

"The Toronto Film Festival is the best place to make people aware of your films," said Oprah Winfrey.

And that awareness is exactly what producers of even the most obscure films are hoping for, said CBS News correspondent Kelly Wallace, because if a film is well-received in Toronto, it suddenly has a real chance at worldwide success.

"A lot of great movies have come out of Toronto in the past few years, but especially last year when 'Slumdog Millionaire' debuted," said Bradley Jacobs of Us Weekly. "It was a movie that no one had heard of that lit the festival on fire and went on to win Best Picture."

Not only does success equal box office dollar, success also generates that all-important Oscar buzz. So stars head north and hit the red carpet in record numbers to promote any one of the more than 300 films making their debut.

"The best movies come out of Toronto, and I hope we're one of them!" said Lowe's co-star, Jennifer Garner.

"People are already talking Oscar up here," said Jacobs. "Some of the greatest buzz, a shoe-in for sure, is Mo'nique, who will probably win the Oscar for her role in 'Precious.'

"Also, George Clooney could be nominated for either of the two films he has here," Jacobs said, referring to the comedies "Up in the Air" and "The Men Who Stare at Goats."

"Of all the festivals, Toronto is one of the best!" said Juliette Lewis, who also stars in "Whip It."

The festival ends this evening.

She also thinks Mo'nique is a "shoe-in" for a nomination for "Precious," which debuted at the Sundance Film Festival earlier this year under the title "Push." "People were already aware of it, had huge buzz," Schwartz said. 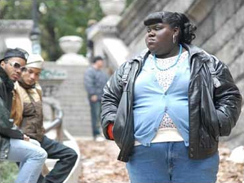 (Lee Daniels Entertainment)
"Precious: Based on the Novel 'Push' by Sapphire," directed by Lee Daniels, is a raw drama of an obese, pregnant Harlem teenager (newcomer Gabourey Sidibe, pictured left) and her hellish life: tortured by her mother, a victim of incest, and forced to bear babies by her own father, she seeks an escape through education. Mo'nique plays Precious' violently and emotionally abusive mother. Oprah Winfrey and Tyler Perry are two of the film's executive producers.

Oscar chances? Schwartz said, "I think that one definitely has a shot."

Schwartz also noted the huge buzz for "Up in the Air," and said George Clooney has a good shot, playing a corporate downsizer who lives for racking up frequent flier miles as he travels hither and yon to lay off employees. "Who doesn't love George Clooney?" she said.

Schwartz said that the roller derby flick "Whip It," starring Ellen Page of "Juno," is carrying a lot of good will for director Drew Barrymore ("It has a really sweet girl power message, so people responded to it well"), and she called the high concept comedy "The Invention of Lying," about a world in which Ricky Gervais discovers the power of actually not telling the truth, "incredible."

She also shouted out for Matt Damon, starring in the Steven Soderbergh whistleblower comedy "The Informant!"

"I think he has a shot for his first nomination of any kind in 12 years," Schwartz said. "He's really something to see."

Damon shared a Best Original Screenplay Academy Award for the 1997 "Good Will Hunting," but has never been nominated for an acting Oscar.

Among other notable films playing at Toronto - many making their North American debuts - are:

• Terry Gilliam's fantasy "The Imaginarium of Doctor Parnassus" (the final film of Heath Ledger, who died during production, and whose role was complete by Johnny Depp, Jude Law and Colin Ferrell);
• Pedro Almodovar's "Broken Embraces" starring Penelope Cruz;
• "Get Low," starring Robert Duval as a hermit who arranges for his own funeral while he's still alive;
• "The Boys are Back" with Clive Owen
• "Leaves of Grass," starring Edward Norton playing twin brothers; and
• "Chloe," by Canadian director Atom Egoyan, best known for "The Sweet Hereafter."